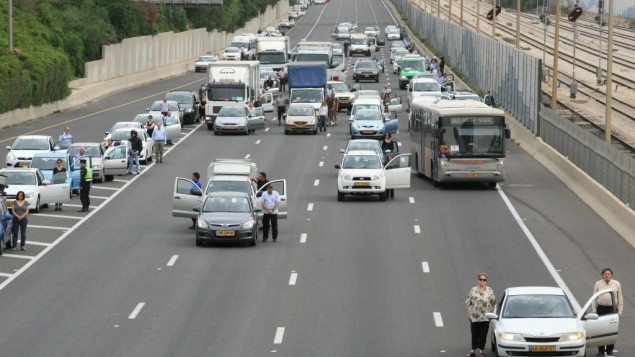 Israel came to a halt at 10 a.m. Thursday, as air raid sirens wailed throughout the country, signaling two minutes of silence in memory of the six million Jews murdered in the Holocaust. Traffic on all roads stopped and motorists got out and stood at attention, many with heads bowed.

As with all Jewish observances, Holocaust Remembrance Day began the previous evening. The nationally televised ceremony on Wednesday evening at Yad Vashem on Mt. Herzl focused on the lighting of memorial beacons by six Holocaust survivors in memory of the Six Million.

A video segment on each torch lighter’s personal story was presented before the flame was lit. The central theme of this year’s commemoration was “My Brother’s Keeper—Jewish Solidarity During the Holocaust.”

In short addresses, Netanyahu warned of the dangers of another Holocaust by modern-day enemies of the Jewish people, while Peres related his family’s own Holocaust story.

“Our enemies tried to bury the Jewish future, but our future was born again in the land of our forefathers,” Netanyahu said. “Here we built a base, and a new beginning of freedom, and hope, and action.”

Netanyahu went on to say that today’s generation “faces calls to exterminate the Jewish state,” and that lessons of the past must not be forgotten. Focusing on Iran, he called it an existential threat to Israel and to world peace. “It is the world’s responsibility to stop Iran securing nuclear weapons,” he declared.

Netanyahu scorned criticism that he erred in associating Iran’s threat with the Holocaust. “I completely reject this attitude,” he said. “To fear telling the truth, which is that there are those today who also seek to destroy millions of Jews, is to disrespect the Holocaust and insult its victims. The prime minister of Israel is not only allowed to conjure the memory of a third of our people when speaking of existential threats, it is his duty.”

Peres noted that a vital lesson of the Holocaust is the moral imperative to defeat racism and discrimination. “A million and a half non-Jews live in Israel,” Peres said in his speech. “We are committed that none of them will be discriminated against due to their nationality or religion. That is the essence of the state of Israel. It is a protecting force, a safe haven, and a great spirit.”

“We used to be a question mark; today we are a strong country,” Peres said. “Humanity has no choice but to learn from the lessons of the Holocaust and stand strong in the face of existential threats, before it is too late.”

The president, too, added a warning to Iran. “Iran is at the center of this threat. It is the center of terrorism. It constitutes a threat to world peace. There is no room to underestimate Israel’s known and hidden capabilities to deal with this threat.

Holocaust Remembrance Day is one of the most solemn on Israel’s calendar. Restaurants, cafes, and places of entertainment are closed for 24 hours, while radio and TV programming is given over exclusively to documentaries about the Holocaust, interviews with survivors, and somber music.

One of the main observances of the day is the public reading of the names of all known Holocaust victims at sites around the country, led by the Knesset, Israel’s parliament.

The main foreign event of Holocaust Remembrance Day took place Thursday afternoon in Poland. Some 10,000 people from 35 countries took part in the annual “March of the Living” from Auschwitz to Birkenau. Israel’s delegation was led by Police Inspector-General Yohanan Danino.

Shortly before the torch-lighting ceremony on Wednesday evening, Tel Aviv University released its annual report on worldwide anti-Semitism. It found that the number of attacks declined in 2011, but they were generally more violent than in previous years.

Moshe Kantor, president of the European Jewish Congress, said his organization expects anti-Semitic attacks to rise if European economies sink into further crisis, if Israel attacks Iran, or if violence erupts between Israel and the Palestinians.

However, none of these conditions applied to last month’s deadly attack on a Jewish school in Toulouse, France, in which a rabbi and three small children were shot dead by an extremist Islamist gunman.