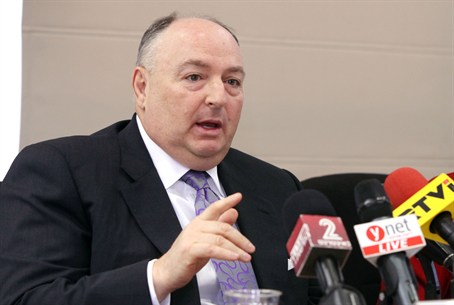 Dr. Moshe Kantor, President of the European Jewish Congress, called on European leaders to act to prevent what he called a “tsunami of anti-Semitism” from engulfing Europe in the event of increased tensions in the Middle East.

Kantor made the statement at a press conference Wednesday at the Kantor Center for the Study of Contemporary European Jewry in Tel Aviv University, where a poll on the status of anti-Semitism in Europe was unveiled. According to the poll, there were fewer anti-Semitc incidents in Europe in 2011, but more violent attacks against Jews.

“The Middle East conflict has been exported to Europe,” said Kantor. “It is used as an excuse to justify every anti-Semitic attack, and this must stop. The change in attitude and action must come at all levels, including the highest levels of government and law enforcement. We must not quietly accept the twisted concept that everything that happens in the Middle East would influence events affecting Jews in Europe, or anywhere else.

“This issue must be dealt with immediately; otherwise, we may face a tsunami of hate if there is an increase of tension in the Middle East, or an attack on Iran. The recent barbarous murders in Toulouse must be a call to action. We know what the problems are and what the solutions are,” Kantor said.

Kantor said he would present an action plan to European leaders when he and other Congress officials meet with them over the coming months.

“Laws to defend our communities need to be passed, such as those to prevent incitement against Jews, which we know goes on in every mosque in Europe,” he said. “Security must also be increased at Jewish institutions. Even raising consciousness on the issue among European Jews can be a useful tool in this battle. Educational programs, even including from kindergarten, must be implemented, and increased intelligence cooperation between authorities in Europe is essential to preventing anti-Semitic acts,” Kantor added.

A good example of the “slippery slope” of anti-Israel ideas and statements leading to anti-Semitism were the recent statements by German philosopher Gunter Grass.

“Grass, with his statements, has sown seeds of anti-Jewish hate around the world. The road from such anti-Israel statements to acts of anti-Semitism is a short one. Freedom of expression is very important, but people like Grass must realize that their statements are not made in a vacuum.” In the case of Grass, he said, the context is that a poll showed that 20% of Germans have anti-Semitic views.

“Statements like the one by Grass contribute to anti-Semitism, in that they are statements against the Jewish state, and use the Israel-Arab conflict as a basis for the committing of anti-Semitic acts,” Kantor added.