The Shekel May Never Drop 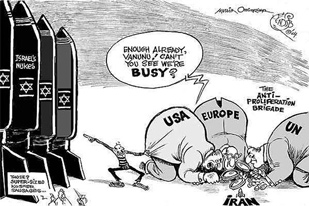 For a very short while I was cheered by what seemed to be a ‘Jewish institutional move’ in the right direction. I thought to myself, that at last, a Jewish leadership positions itself at the forefront of the battle for peace and reconciliation. Finally, we will see a Jewish political call against an Israeli preemptive attack against Iran.

The shekel has dropped, I thought to myself. But I was obviously wrong, in fact totally wrong. The shekel may never drop. As it seems the European Jewish Congress is concerned with one thing i.e. Jewish ‘potential’ suffering and, of course, the ‘rise of antisemitism’.

Moshe Kantor, president of the European Jewish Congress, said he feared a “minority of angry, extremist European Muslims who live in impoverished neighborhoods might use an Israeli attack as a pretext to hit local Jews, particularly in France and Great Britain.”

Seemingly Kantor wasn’t concerned at all with the possibility of losing millions of innocent lives in the region. He wasn’t even concerned with the possibility that an Israeli attack could easily escalate into a regional nuclear conflict that may radioactively contaminate the entire region and some large parts of Europe.

Moshe Kantor, the president of the European Jewish Congress, an umbrella organization that claims to represent some 2.5 million Jews in Europe, is concerned with Jews only.

“If Israel attacks Iran, it will be a dramatic increase of anti-Semitic, very violent attacks against Jews,” he said.

Seemingly, there is no limit to Judeo-centrism, yet, I believe that Jewish leaders would do themselves and their communities a big favour if they, at least, make an effort to disguise their apparent lack of universal empathic consciousness and total carelessness for the rest of humanity.