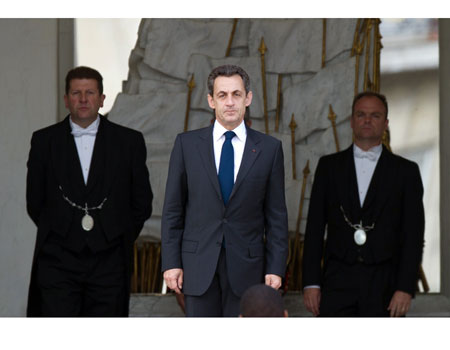 Netanya’s French community disappointed by elections results; says new president ‘will care for Muslims because they supported him’.

Socialist Hollande swept to victory in France’s presidential election on Sunday, in a swing to the left at the heart of Europe that could start a pushback against German-led austerity.

Sarkozy conceded defeat within 20 minutes of the last polls closing, telling supporters he had telephoned Hollande to wish him good luck. “I bear the full responsibility for this defeat,” he said.

In Israel, the city of Netanya has the largest community of French nationals. Many expressed concern that Hollande will “Care for the Muslims, because they supported him.”

“Hollande is not good for the Jews or for Israel,” said Lorence Partush, adding that many Jews in France will now have an excuse to make aliyah, because “he loves Muslims.”

“Hollande is a danger to the Jewish community in France. We lived there for over 40 years, but those were different times. Now its difficult for us,” she added.

Sarkozy claimed a landslide victory among French expats living in Israel, winning 92.8% of the vote. But that was not the case at home, where he lost to Hollande by more than a 3% margin.

The Jewish community in France expressed mixed emotions about Hollande as well.

The European Jewish Congress congratulated him: “Our recent meeting with Mr. Hollande was very constructive and touched on many areas of concern to the Jewish community,” EJC President Moshe Kantor said in a statement.

“I believe we have a sympathetic ear in the new French leadership and we look forward to continuing this relationship with the new president.”

But Richard Prasquier, who heads the umbrella group of French Jewry, said he was concerned that Hollande’s election would lead to “a rise in the anti-Israel left.”

“Some of the parties Hollande is likely to partner with for his coalition are not friends of Israel,” he told the Jewish Press in New York.

President Shimon Peres congratulated Hollande on his victory Monday: “On behalf of the Israeli nation, it is a pleasure for me to send my sincere congratulations on your election to the post of president of France,” Peres said in an official communiqué.

Prime Minister Benjamin Netanyahu also offered his congratulations to the French president-elect, saying that the relations between Jerusalem and Paris “have always been strong and friendly and I am sure they will remain so.”

Palestinian President Mahmoud Abbas also offered his congratulations, saying that the Palestinian Authority “hopes to continue its friendship with France and that France will continue to strengthen its regional and international role in the service of justice and peace in the world.”