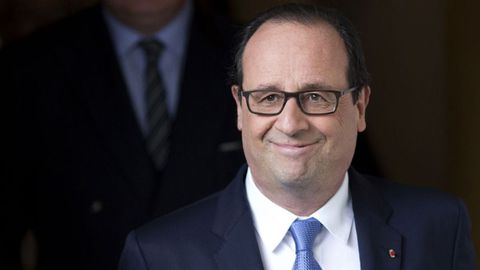 Having campaigned under the self-adopted label of ‘Mr Normal’, Francois Hollande emerged as the frontrunner in the Socialist party primaries, following the timely demise of the widely touted future party leader Dominique Strauss Kahn.

Despite criticism of his lack of governmental experience, he rose to victory over incumbent President Nicholas Sarkozy in Sunday’s French presidential election, to become the leader of the eurozone’s second largests economy.

Hollande has described himself as a consensus-builder, a simple and direct individual in touch with the values and concerns of the French electorate.

Viewed by some sectors of the Jewish community in France as a less attractive presidential prospect than his rightwing opponent Nicholas Sarkozy, he was quick to align himself with the centre left and commit to being ‘relentless in the fight against anti-Semitism’.

In an interview with the Jewish weekly Actualite Juive, he said: “Security of Jews in France is not the problem of a particular community, it is that of the national community.”.

The President-elect also declared that the Toulouse shootings of March were ‘a trauma for all of France’. He went on to say: “It’s not up to French Jews to defend themselves but rather to the Republic to protect them. I will not let anything pass, anti-Semitic acts as well as words and more broadly anything that may contribute to a climate which would isolate the Jews within their own country.”

Hollande has been equally vocal on the subject of Israel and openly supports a two-State solution. He has also remained committed to carrying out his manifesto ‘without negotiation or bargaining’ with the extreme left. “‘I address myself to the whole of France, without exception, without distinction, without hierarchy,” he said.

On the subject of anti-Israel manifestations within the far left parties, he went on to say: “I am totally opposed to the Israeli goods boycott, which is illegal and won’t serve to further the case for peace.”

Despite having yet to visit Israel, Hollande announced a commitment to doing so as part of his planned future projects. “Peace between the Israelis and the Palestinians, as everyone knows, has guidelines: two neighbouring and sovereign states, each respected and legitimised by the other.” He went on to expound on the threat Iran’s nuclear programme poses to Israel and global peace in general: “We must have a fixed stance with regard to Iran.”.

A protégé of former European Commission chairman Jacques Delors (whose daughter, Martine Aubry, was his rival for the Socialist party leadership and is among the candidates to be instated as his Prime Minister when he takes office), Hollande grew up under the inaugural and sole Socialist president Francois Mitterrand.

A product of the elite Ecole National d’Administration (ENA), in 1978, Hollande met Segolene Royal, a fellow Socialist party stalwart, and embarked on a relationship spanning 30 years and was to shape his career when Royal became the Socialist party nominee for the 2007 election, during which period Hollande served as Socialist party leader.

The couple have since separated, with Hollande going on to embark on a relationship with political journalist Valerie Trierweiler, who is credited with encouraging him to lose weight and adopt a tough campaigning stance.

Hollande soon emerged as a stronger opponent than previously thought, fending off Sarkozy’s more combative style with aplomb during the sole presidential debate of the campaign. As Trierweiler said: “He has changed. It’s as if he started wearing this suit as the days went on. He’s completely ready to take office.”

Hollande’s victory has been welcomed by Jewish representatives, with CRIF president Richard Prasquier congratulating his decisive win and claiming him as a ‘friend of Israel’ and a supporter of the fight against anti-Semitism.

The President of the European Jewish Congress, Moshe Kantor, issued a statement saying a recent meeting of an EJC delegation with Hollande “was very constructive and touched on many areas of concern to the Jewish community. I believe we have a sympathetic ear in the new French leadership.”