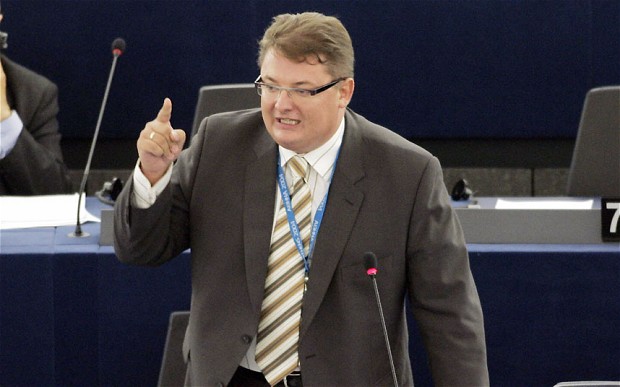 Jewish groups have reacted with fury after David Cameron’s allies in Europe invited the owner of a Polish radio station infamous for xenophobia and anti-Semitism to a meeting at the European Parliament.

Father Tadeusz Rydzyk, the owner, was in Brussels along with around 200 supporters at the beset of MEPs belonging to Poland’s Law and Justice party, key allies to the Conservatives in the parliament.

His attendance was to draw attention to the situation of TV Trwam, the television arm of his controversial radio station Radio Maryja, which has been taken off the air in Poland owing to a dispute over its broadcast licence.

In the past notable bodies such as the Council of Europe and the Simon Wiesenthal Centre have accused Radio Maryja of broadcasting anti-Semitic material.

“It is extremely disturbing that once again the European Parliament will be hosting a proud anti-Semite and xenophobe,” Dr Moshe Kantor, president of the European Jewish Congress, told The Daily Telegraph.

“The seat of European democracy should be shunning people like Tadeusz Rydzyk and not giving them a platform. Especially now, as the far-Right and Neo-Nazis are making considerable political gains it is incumbent on the European Union leadership to send a clear and unequivocal message against hate and intolerance and ban him from official European institutions.”

The European and Conservatives and Reformist (ECR) club, to which both Law and Justice and the Tories belong to, was quick distance itself from the presence of Father Rydzyk with a spokesman saying the event “was not organised or sponsored by the ECR and no money was contributed”.

But the furore over the priest’s presence will further embarrass the Conservatives, which have had to endure an at times damaging relationship with Law and Justice since the ECR was founded in 2009.

In 2010 Michal Kaminski, a Polish MEP, quit Law and Justice saying it he “could not accept the party being taken over by the far right”.