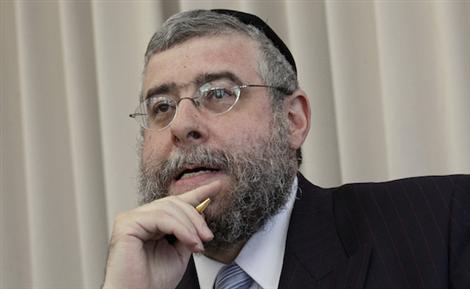 The Conference of European Rabbis (CER) has slammed the Estonian government’s announcement it will change its law on shechita (Jewish religious slaughter), to reflect “new scientific knowledge”.

CER President Pinchas Goldschmidt described the new research as “deeply flawed” and “agenda-led”, adding that the organisation would be encouraging its members “to ensure that we are able to identify which governments may be introducing dangerous measures relating to religious slaughter and tackling those threats as appropriate”.

Estonia’s already stringent legislation regarding shechita, which requires authorities to be notified of plans to carry out the ritual ten days previously, will be adapted in line with the findings of the 2010 DialRel report, which similarly threatened to ban the ritual in the Netherlands. Last year, the Dutch Lower House approved a ban on ritual slaughter of animals introduced by the Animal Rights Party (PvdD).

However, after much debate and lobbying by groups, including the European Jewish Congress, together with the Organisation of Jewish Communities in The Netherlands and Shechita UK, the Dutch Upper House, the Senate, rejected the proposed bill. President of the European Jewish Congress (EJC) Moshe Kantor described the reversal as “a momentous agreement and we hope this will serve as a paradigm ad precedent for all countries in Europe”.

The Estonian government has insisted it has “no plans” to issue an outright ban on shechita.

European member states are required by European Regulation to replace their existing domestic laws on ritual slaughter by January 2013 and, as such, many governments have referred to the DialRel report for scientific guidance in formulating their new policies. However, the CER claims “many European Jewish communities are not aware that shechita could be out in danger as a result”.

Kantor called on EU member states “to show the utmost restraint when attempting to change the status quo regarding Jewish traditions and practices”, adding that “proscribing or limiting Jewish practices sends entirely the wrong message to the Jewish community”.

Estonian law currently requires all ritual slaughters to be observed by a government inspector and demands the religiously-controversial post-stunning method to be applied after the animal’s throat is cut. Many rabbis reject the act of post-stunning, as Jewish religious law requires animals to be conscious when their necks are cut.

However, the DialRel report claims that shechita causes higher levels of pain in the animal than other methods of slaughter that involve stunning. By contrast, post-stunning only moderately reduces the level of pain, and pre-stunning produces “low” levels of suffering.

According to the EJC, there are currently approximately 2,500 Jews living in Estonia, the majority of which in the capital of Tallinn. Shechita is banned in Sweden, Norway, Switzerland and Iceland. Countries that impose post-cut stunning include Estonia, Finland, Denmark and Austria.