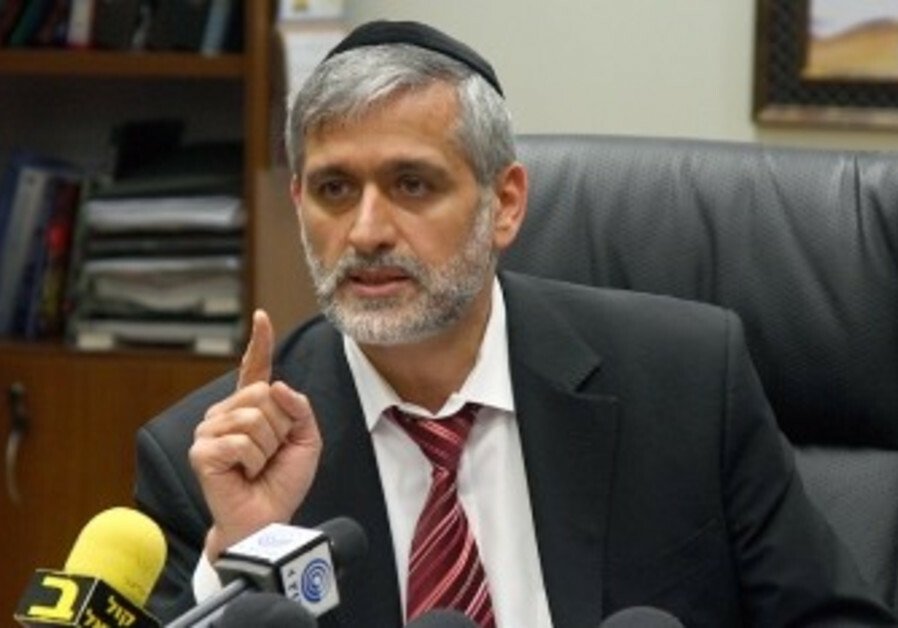 Interior Minister Eli Yishai wrote a letter to German Chancellor Angela Merkel on Wednesday asking her to intervene against any measures that might criminalize circumcision in her country.

Yishai’s letter follows a criminal complaint filed this week by a physician in Germany against Rabbi David Goldberg, a mohel based in Hof Saale, Bavaria, for performing brit mila.

The complainant, Dr. Sebastian Guevara Kamm from Giessen in the German state of Hesse, seemingly filed the complaint on the basis of a court ruling in Cologne, in North Rhine- Westphalia state, in June that non-medical circumcision is a “serious and irreversible interference in the integrity of the human body.”

According to the DPA news service, the authorities in Bavaria are examining the complaint for “criminal relevancy.”

However, following the Cologne ruling Bavarian authorities said that they would not enforce the decision in their state.

In his letter, Yishai pointed out that several European countries have acted against circumcision carried out according to Jewish tradition.

“As deputy prime minister, interior minister and leader of the largest religious party [in Israel], but mostly as a Jew, I turn to you to ask you to prevent this phenomenon from continuing,” the Shas chairman wrote.

The interior minister asked Merkel to ensure that Jews can continue to proudly live fully Jewish lives in Germany.

“Circumcision is one of the most important commandments for the Jewish people, and the first given to one of the fathers of our nation, Abraham, as a sign of his eternal treaty [with God],” Yishai said. “Even in times of slavery and exile, Jews made sure to fulfill this commandment, and did so happily,” he added, quoting from the Book of Genesis.

Speaking to The Jerusalem Post on Wednesday, Goldberg said the complaint was anti-Semitic and that he would continue to perform brit mila procedures regardless.

The judicial authorities have not responded to queries about the complaint and Goldberg has not received notification from the prosecutor’s office about it.

Asked whether the reaction to the complaint was overblown, Rabbi Abraham Cooper, associate dean of the Simon Wiesenthal Center, told the Post that the “outrageous decision by one judge in Cologne has already led to major hospitals in three countries to at least temporarily suspend brit mila. A major political party in Norway is considering bringing forward legislation to ban mila.

“The Jewish world had better wake up to growing trends in Europe that denigrate our core religious rites of mila and shechita [ritual slaughter]. And frankly, the very notion that German authorities are even mulling over whether they would bring charges against a rabbi for performing the mitzva of mila should send a shiver down the spine of every Jew.”

In July, the Bundestag, the lower house of the German parliament, passed a resolution by a solid majority of deputies to anchor religious circumcision in law. The German Justice Ministry is expected to issue a new regulation regarding the issue in the coming months.

Cooper and Dr. Shimon Samuels, also from the Wiesenthal Center, will meet with Justice Minister Sabine Leutheusser-Schnarrenberger in Berlin on August 29 to press German leaders to advance legislation to guarantee full legal protection of religious rights for Jews and other minorities.

Goldberg, who says he has carried out 4,000 circumcisions over 40 years without ever experiencing a problem, denied the possibility that the complaint could be construed as a human rights issue.

“Of course it’s anti-Semitism,” Goldberg, 64, told the Post. “What does this doctor care about our children or what we do, or do not practice?” Goldberg added that he has received emails and telephone calls calling the practice of brit mila “primitive” and saying that if Jews do not like the law of the land “they can go back to where they came from.”

Kamm said, according to German press reports, that the charge of anti-Semitism was a “typical reflex” reaction and that he was not anti-Semitic.

As to the possibility of using local anesthetic during brit milas, Goldberg said that was possible but not a good idea since it could do more harm than good to eight-day-old children.

He added, however, that he did use anaesthetizing creams to numb the area before carrying out circumcisions.

Goldberg said he hoped he would not be formally charged but that he was willing to stand trial for carrying out brit milas.

He added that the complaint reflected a more general problem in Europe with brit mila.

Jewish organizations around the world have reacted angrily to the criminal complaint against Goldberg.

Officials at the Simon Wiesenthal Center expressed “shock and anger” over the incident.

“Historically, attempts to stop the Jewish people from performing this core Jewish rite, dating back to our patriarch Abraham, were associated with ancient Greek and Roman rulers and modern-day tyrants like Stalin and Hitler, not democracies,” said Rabbi Marvin Hier, founder and dean of the center.

“This criminal complaint is an attack not only on one rabbi but against the entire Jewish people.

The Simon Wiesenthal Center will marshal all necessary political and legal expertise to thwart this outrage,” he added.

Ashkenazi Chief Rabbi Yona Metzger returned on Wednesday from a “public diplomacy visit” to Germany, having been asked by the German Jewish community, before Kamm lodged his complaint, to address the issue of Jewish circumcision with German decision-makers.

“Throughout the centuries Jews gave up their lives for this commandment, and when they were forbidden to perform it they did it in secret anyway,” he said. “We do not want, God forbid, to return to these dark days.”

Metzger said during a press conference in Germany that he was concerned that the Cologne ruling could not only affect the legal situation there but also in other European countries such as Switzerland, Austria and Denmark.

Germany’s Minister for Family Affairs Kristina Schröder told the main German Jewish newspaper Jüdische Allgemeine on Wednesday that “an appropriate anesthetic during circumcision is for me an important point.”

A spokesman from the ministry said that the German Ethics Council would meet on Thursday in Berlin to address the controversy.

Five experts, including theologians, lawyers and physicians, will be present, Said Schröder, “I recognize in Jewish religious practice there are ways to bring pain-free and medical standards in harmony with religious law.”

The minister met with Metzger and other rabbis to discuss the dispute. Metzger stressed the possibility of medical training for Jewish circumcision practitioners but rejected the use of local anesthetic.

German Foreign Minister Guido Westerwelle said during a visit to Liechtenstein that “Jewish and Muslim traditions must be allowed in Germany without legal hindrance. We should not play with the reputation of Germany in the world as a land of religious tolerance.”

“It has been many decades since a Jew was charged for practicing Judaism openly and [this] is reminiscent of far darker times,” Kantor said in a statement to the press. “We hope that in Germany, of all places, the authorities would remain far more sensitive to this issue.

“The charges laid against a Jewish religious leader for performing a fully legal action is outrageous and a very troubling escalation sending a deeply problematic message to the Jewish community,” Kantor said.

The Rabbinical Center of Europe, an organization representing more than 700 Orthodox rabbis from across the continent, issued a statement saying it had mobilized Europeans to support Goldberg, and that the number of responses from business executives, Jewish and non-Jewish, who said they would help fund all necessary legal costs had been “overwhelming.”

Rabbi Aryeh Goldberg, deputy director of the RCE, explained that “Jews in Europe feel that this is an struggle against Judaism. On the one hand it makes them angry, and on the other it creates a great deal of sympathy and solidarity in the non-Jewish population.”