Future Of Controversial European Parliament Delegation Visit To Iran Under Threat, As Member Withdraws Her Participation 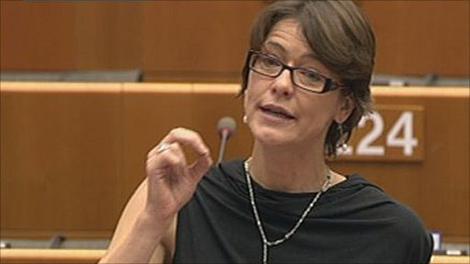 The future of a controversial European Parliament delegation planned visit to Iran at the end of this week hangs in the balance after Belgian Socialist MEP Kathleen Van Brempt withdrew from the group of MEPs due to participate, citing “tension” around its reception by the international community.

“I am in favour of dialogue but it is not the right time to travel to Iran,” she was quoted as saying.

Her announcement came as European Jewish Congress (EJC) President Moshe Kantor called Monday on EU parliament leaders to stop the visit from giving Iran “a vital boost to its diplomatic standing at a time when democratic countries around the world are now recognizing beyond any doubt that Iran represents the most significant threat to global peace and security today.”

Heralding last week’s stringent EU sanctions on the Iranian regime, Kantor expressed his surprise “that the European Parliament, the Union’s ultimate symbol of democracy and human rights, should be seen in any way as granting legitimacy to a regime which has shown a constant disdain for basic human rights and democratic practices in its own country while simultaneously threatening the very physical existence of its neighbours and in particular, the State of Israel.”

Following an emergency meeting of the Friends of a Free Iran group in the parliament last week, where it was claimed that the visit of the delegation would undermine the latest round of sanctions decided by the Foreign Ministers and later endorsed by the EU heads of state or government, Van Brempt insisted she was “in favour of dialogue, but it’s not the right time to visit Iran.”

She hinted that other colleagues would also withdraw their participation.

A spokesperson for Finnish Green MEP Tarja Cronberg, who is due to lead the delegation, declined Monday to comment on the controversy surrounding the visit, as she revealed Cronberg would be issuing a further statement on the visit in the coming days.

Cronberg previously claimed the visit of European parliamentarians with the Iranian parliament’s Friendship Group in Tehran would “provide the first opportunity for dialogue between the two delegations for over three years and should be regarded as a bridge-building exercise.”

However, the Vice President of the European Parliament, Alejo Vidal-Quadras, from the European People’s Party group (Christian-Democrats) told last Monday’s meeting of the Friends of a Free Iran that “any formal delegation from the European Parliament, or indeed any national parliament in Europe, to Iran would be extremely counter-productive,” coming so soon after increased sanctions were announced aimed at forcing Iran’s hand to abandoning its nuclear ambitions, as well as rejecting “not only human rights violations, but also repression, fundamentalism and terrorism.”

Responding to Cronberg’s “good intentions” regarding building bridges with the Islamic Republic, he added: “Of course we are not against dialogue, even with dictatorships, but our dialogue must be limited to those dictators who show some sign of being reformed,” arguing that history and repeated attempts by Europe at engaging with the regime, had shown this not to be the case with Iran.

Chairman of the parliamentary friendship group, Scottish Conservative Struan Stevenson, added his criticism regarding Cronberg’s Iranian counterpart Kazem Jalali, who, he argued, also heads Iran’s friendship group with Syria, as well as “praising the victory of Hezbollah, he says over the Zionist regime in the 33-day war in Lebanon, which he calls one of Iran’s greatest achievements.”

Further asserting the delegation’s visit would “be exploited ruthlessly by the mullahs for propaganda purposes,”, Stevenson’s views were supported by the EJC, which insisted in its letter to President of the European Parliament Martin Schulz, the leaders of each parliamentary Group and the Chairpersons of the European Parliament’s Human Rights Committee, Security and Defence Committee and Women’s Rights and Gender Equality Committee: “We believe that such a visit would be instrumentalised by the Iranian regime, as was a similar visit in 2007, in order to whitewash human rights abuses in the country as well as to show that the European Union is not serious in its policy of maintaining Iran as a pariah state as its seeks dangerous nuclear proliferation in such a potentially volatile region of the world.”

Sending a delegation to Iran at this point would be “shooting ourselves in the leg,” contended Estonian Christian-Democrat MEP Tunne Kelam, who argued that “our delegation will be able to meet only loyalists and former revolutionary guards, and will not have any access to any opposition activists or any political prisoners.”

Arguing that direct diplomacy gives the regime room for flexibility at a time when its running out of alternatives due to the squeeze being inflicted on its economy by mass international sanctions, he concluded: “if we are determined to make efforts to change the situation, the one condition is always to cause real pain to rulers, dictators. Without real pain, nothing will change.”

The controversy around the planned visit to Tehran comes as the European Parliament will announce later this week during its plenary session in Strasbourg the winner of its annual Sakharov Prize for Human Rights. Among the five nominees are two Iranians, an imprisoned human rights lawyer and a dissident film director. The announcement will be made next Friday, the day before the delegation is scheduled to arrive in Iran.