Experts Weigh In On Rise Of Ukrainian Svoboda Party 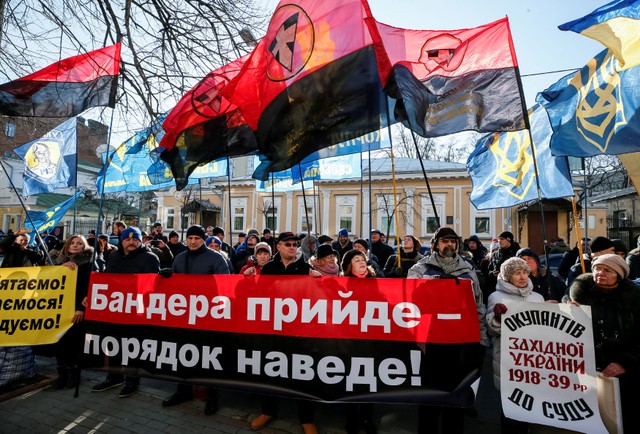 In telephone and email interviews with The Jerusalem Post on Monday, experts on Ukrainian xenophobia and anti-Semitism raised alarm bells about the results of the election.

Irena Cantorovich, a scholar at Tel Aviv University’s Moshe Kantor Database for the Study of Contemporary Anti-Semitism and Racism, wrote, “This is the first time in the history of modern Ukraine that a nationalistic party enters the parliament and it will probably have more than one representative in it. Svoboda is known for its racist and anti-Semitic views and several complaints were filed against its leader, Oleg Tyagnibok, for his anti-Semitic comments.”

She noted that Tyagnibok claimed that “Ukraine is being controlled by a Russian-Jewish mafia. The party’s platform also includes support for the rehabilitation of Ukrainian nationalists who collaborated with Nazi Germany.”

“Members of the party took part in anti-Semitic incidents such as damaging synagogues, Jewish centers and cemeteries. The party is also active against the coming of Jewish religious pilgrims to Uman. In the previous election, the party received only 1 percent of the votes and now about 7%, so we can see that their influence is growing,” added Cantorovich, who has written about Ukrainian collaborators who worked with the Nazis in their efforts to kill Jews in the country.

“However, it is too early to determine whether this will have any effect on Jewish life in Ukraine and on the number of anti-Semitic incidents in this country.”

Svoboda was founded in 2004 and had previously named itself the Social-National Party of Ukraine.

Speaking with the Post from Ukraine, Vyacheslav A. Likhachev, an expert at the Eurasian Jewish Congress, said that the “party has a very anti-Semitic core in its ideology.”

Likhachev, who works for the Congress of Ethnic Minorities of Ukraine monitoring xenophobia in the country, said Svoboda’s entry into parliament “means nothing on a practical level” because “opposition forces cannot change the general situation in the country. It will not lead to any changes in legislation.”

He noted that the extremist party secured 41 members of parliament from 450 members, said that while the number is large, it is not enough to provide a program and affect policy changes.

Likhachev said the “leaders of the party are famous for openly racist and anti-Semitic speeches” and that the party’s victory in the election was a “symbolic legitimization of Neo- Nazis and anti-Semitic ideology in the eyes of society.”

“Svoboda is composed of the same elements as auxiliaries of the Nazis that committed mass murders of Jews, Russians, and Poles,” Dr. Shimon Samuels, the Simon Wiesenthal Center’s director for international relations, told the Post.

He added that the vote represented the desire for “a scapegoat for corruption“ in Ukrainian society and that the focus was on the Jewish community in that regard. “Ukrainians have hopes of association membership in the European Union and the election results can only void any such prospects,” Samuels said.

“This is a very disturbing development, but perhaps not surprising given Ukraine’s history of vehement anti-Semitism. Svoboda did much better in Western Ukraine, a region that even imagines it might breakaway from the rest of Ukraine and join the EU,” said Tom Gross, a political commentator who has written about Eastern Europe and international affairs.

“The party reportedly won over 50% of the vote in Lviv and if this turns out to be the case, I believe it would mark the first time since World War II that a majority in any city in Europe voted for a blatantly anti- Semitic party. Lviv is a city that was historically over one-third Jewish, but almost all the Jews were murdered by the Nazis and their Ukrainian collaborators and yet in which today you will find very little by way of Holocaust commemoration,” Gross continued.

The JTA reported in October that “a Jewish doctor in Lviv, Ukraine, was beaten to death by an assailant identified by some local news sources as a 26-year-old Arab.” The victim, 67- year-old Leon Freifeld, was a member of the Lviv Jewish community.