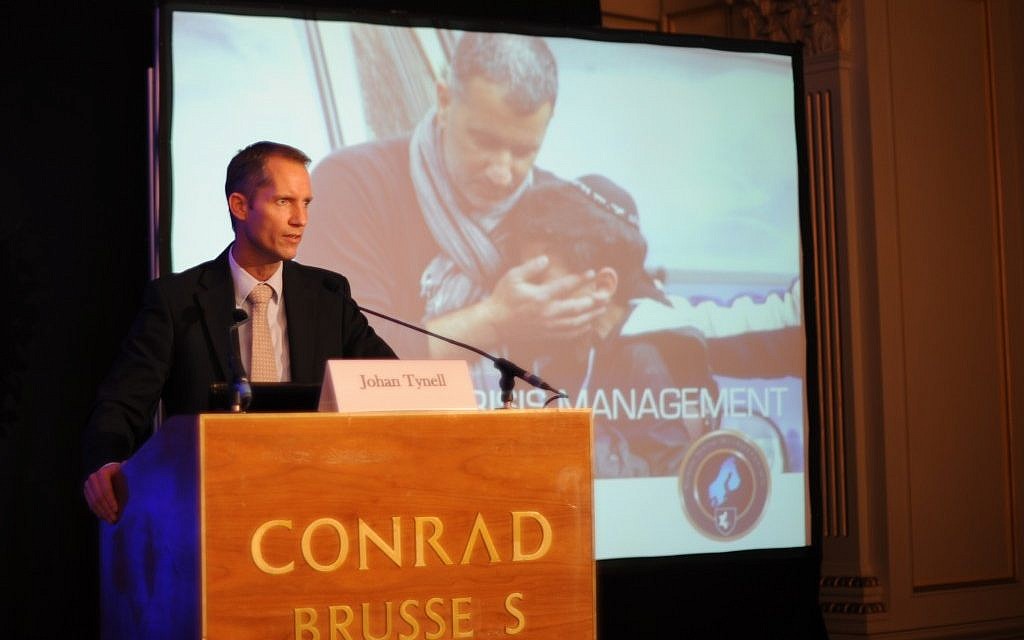 Within hours of Israel’s assassination of a top Hamas commander, the situation room sprang into action, anticipating retaliatory attacks and preparing instructions to keep civilians out of harm’s way.

No, the room wasn’t deep in a bunker beneath Jerusalem, but thousands of miles away – and at a seemingly safe remove from the violence on the ground – in London.

It was the situation room of the Community Security Trust, British Jewry’s security agency, which was open for business within hours of Israel’s killing of Ahmed Jabari last week.

The CST has long been considered the gold standard in European Jewish community security. But communities across the continent recognize that they are all at risk from anti-Semitic attacks, which often spike in the wake of Israeli military operations, and are struggling to ramp up security precautions despite the often prohibitive costs.

“There’s no telling what would ignite the next wave of attacks against our communities,” Moshe Kantor, the president of the European Jewish Congress, said at a crisis management training session that drew leaders from 36 Jewish communities to Brussels on Nov. 6, eight days before the Israeli military launched its Operation Pillar of Defense. “It could be hostilities between Israel and Iran or in Gaza or a stupid film on Muslims in YouTube. We have to assume it’s coming.”

The site of a terrorist attack in France had surveillance cameras and a tall fence, but no one monitored the video feed, and there was no guard

Nine months after a deadly attack by a Muslim extremist claimed four lives at a Jewish school in Toulouse, France, European Jewish leaders are beginning to take steps to address some glaring gaps in the security capabilities of the continent’s Jewish communities. But the process is hindered by the enormous costs involved and differing views of where the primary responsibility lies for ensuring Jewish safety.

Approximately half of Europe’s Jewish communities have no crisis-management plan in place. Even in large communities demonstrably at risk of attack like France, which is home to Europe’s largest Jewish community of about 500,000, security resources remain scarce, and some congregations have virtually no protection. While CST’s situation room was humming last week, the offices of the organization’s French counterpart were unreachable by phone or email.

“Nine months ago, Jewish communities in Europe received a wake-up call when Mohammed Merah, a 23-year-old Muslim radical, killed three children and a rabbi in Toulouse,” said Arie Zuckerman, secretary-general of the European Jewish Fund, which bankrolls much of the EJC’s activity. “At the same time, the spike in anti-Semitic attacks coincides with a recession, which is hampering communities’ ability to carry the burden of security costs.”

In Toulouse, the Otzar Hatorah school had surveillance cameras in place and a tall fence around the perimeter, but no one monitored the video feed, and there was no guard, which allowed Merah to easily enter the compound toting a gun. Insiders from that community spoke of “a total collapse” immediately after the attack.

“In such an event, which has the potential of destroying a community, crisis management can restore a sense of order and enhance the community’s resilience,” said Ariel Muzicant, the former head of the Austrian Jewish community and head of the EJC crisis-management task force.

Only 20 of the 36 communities in the EJC have crisis-management programs, which determine who does what in case of emergency. In Marseille, where 80,000 Jews live among 250,000 Muslims, there is no security guard present even at prayer time and during Hebrew school lessons at the French city’s Jewish community center and great synagogue. On a recent Sunday, walking into the complex simply meant pushing open the front door, which remained unlocked.

Among European Jewish communities, British Jewry is the undisputed security leader. The CST has five offices, dozens of employees and thousands of volunteers, drawn mainly from Britain’s Jewish population of 250,000. Since 2008, CST has installed about 1,000 closed-circuit cameras and digital video recorders in dozens of buildings, and has trained 400 British police officers on hate crimes.

The SPCJ, French Jewry’s security unit, did not respond to questions about its budget, size or procedures. But Richard Prasquier, the president of CRIF, the umbrella organization of the Jewish communities of France, said SPCJ had a “vast network of dedicated volunteers.” The unit is particularly visible in Paris, where Jewish schools and buildings receive robust protection by SPCJ guards and police.

The CST budget was $5.8 million last year, which it raised through donations and government subsidies. The budget is more than double that of Britain’s Board of Jewish Deputies, the country’s main Jewish umbrella organization, and far larger than most European Jewish security organs. Smaller communities, most of which are less than one-fifth the size of Britain’s, can only dream of deploying security resources at that scale.

“The subject of funding for security is particularly painful for Europe’s smaller communities,” said Anne Sender, a former president of the Jewish Community of Oslo, which has just 750 members. “We simply don’t have the deep pockets that larger communities have.”

Norway’s Jews spend just $87,000 annually on security – about half of what they raise each year in fees that also support education and religious services, according to Ervin Kohn, the community’s current president.

Kohn launched a media campaign that persuaded the government to make a one-time grant of $1.2 million this year to protect Norwegian Jews. It was half of what Kohn had sought to ensure security at a “reasonable level” over the next few years, he said.

Unlike in Britain, where security is largely seen as the community’s concern, other European Jews see it as the government’s responsibility.

“I pay for Jewish life, not Jewish security,” said Eric Argaman of Oslo, who pays about $200 a year in community membership fees. “That’s the government’s job.”

Elsewhere in Scandinavia, Jewish leaders recognize that they cannot rely solely on the government. In Sweden, with a Jewish population of about 20,000, authorities have made a one-time grant of approximately $500,000 for security at Jewish institutions – a sum that doesn’t “begin to cover costs,” according to Lena Posner-Korosi, president of the Council of Swedish Jewish Communities.

In Malmo, Sweden’s third largest city and the site of dozens of anti-Semitic incidents each year – including a bomb attack in September on the Jewish community center – there is only one part-time security professional, according to Jonas Zolken, regional director for Sweden at the Nordic Jewish Security Council. In Denmark, where the capital city lies just over the Oresund Bridge from Malmo, the government offers no security funding for the country’s 8,000 Jews.

“Our experience shows we need to cooperate with local police and security authorities, but ultimately can rely on no one but ourselves,” said Johan Tynell, the Malmo-born director of security for Denmark’s Jewish community.

In the Netherlands, with 40,000 Jews, the community spends more than $1 million on security without any significant help from the government, according to Dennis Mok, the community’s security officer.

“Even after Toulouse, the official Dutch position is that there is no elevated threat toward the Jewish community,” Mok said. “We, of course, have a different view.”

To free communities from depending on the threat assessments and budgetary constraints of national governments, the European Jewish Congress has been lobbying European leaders to arrange for security funding from the European Union. French President Francois Hollande and Czech Prime Minister Petr Necas already have said they would support the initiative, Kantor said.

Meanwhile, the EJC announced it was establishing a continent-wide security fund, but did not specify how much would be allocated. The congress also has teamed up with the World Jewish Diplomatic Corps to help small communities lower security costs. The corps, a nonprofit international organization that aims to empower young Jewish professionals, will send its “most capable” crisis advisers “to help small Jewish communities build foundations for defense,” according to its director, Michael Colson.

Moreover, some Jewish leaders say much more can be done, even on a shoestring budget. Tynell said at the conference that Jewish professionals should be recruited as volunteer crisis managers and given responsibility for talking to the media, doing internal communications, coordinating with local authorities and even delivering kosher food to anyone who might be hospitalized.

“When these things are left to chance, the resulting mess compounds the trauma which members of the community will experience in a crisis,” Tynell said. “Prevent this or your community members will suffer for a long time.”