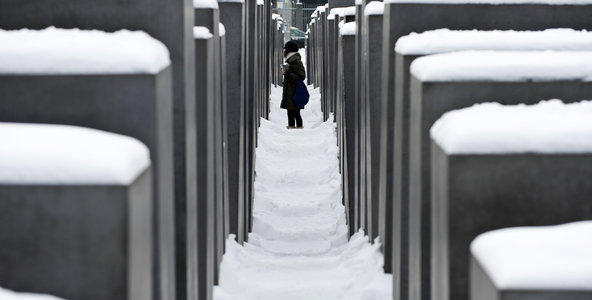 The Simon Wiesenthal Center has prompted an outraged debate in Germany after it included a prominent German journalist’s remarks in its annual top 10 list of anti-Semitic and anti-Israel slurs.

The Los Angeles-based organization, named for a celebrated Nazi-hunter and dedicated to fighting anti-Jewish bigotry, listed Jakob Augstein, a well-known editor and columnist, among 2012’s top perpetrators of the slurs.

The list, published late last month, cited articles in which Mr. Augstein referred to Israel’s nuclear power as a threat to world peace, condemned its actions in Gaza, and compared Israeli ultra-Orthodox Jews to Islamic fundamentalists.

German media colleagues have leapt to the defense of Mr. Augstein, who edits the weekly Der Freitag magazine and contributes regularly to the online edition of Der Spiegel magazine. Others, including the U.S.-based Anti-Defamation League, have come out in support of the Wiesenthal Center.

In a telephone interview with Rendezvous, Rabbi Abraham Cooper, associate dean of the center, said it stuck by its judgment and called on the journalist to apologize “to his readers and to the Jewish people.”

The conservative Frankfurter Allgemeine Zeitung was quoted by Spiegel Online as saying the inclusion of Mr. Augstein, a 45-year-old left-wing writer, was a serious strategic error.

“Not only has a critical journalist been placed in a group into which he doesn’t belong,” the daily wrote, “the nine other people and groups who have justifiably been pilloried can now exculpate themselves by pointing to such arbitrariness.”

Juliane Wetzel at Berlin’s Center for Research on Anti-Semitism expressed surprise that Mr. Augstein had been included in a list that also included Iran’s President Mahmoud Ahmadinejad.

“One could certainly argue that Augstein’s criticism of Israeli policy is sometimes excessive,” she said. “But that has nothing to do with anti-Semitism.”

Salomon Korn, vice president of the Central Council of Jews in Germany, also challenged the journalist’s inclusion in the list, telling German public radio that the Simon Wiesenthal Center was “very removed from German reality.”

Mr. Korn criticized the compilers of the list for taking their lead from Hendryk Broder, a German Jewish writer and scourge of perceived anti-Semites. The controversial list quotes Mr. Broder as saying:

“Jakob Augstein is not a salon anti-Semite, he’s a pure anti-Semite . . . an offender by conviction who only missed the opportunity to make his career with the Gestapo because he was born after the war.”

The English-language publication The Local, which on Wednesday nominated Mr. Broder, the “prickly polemicist” as its German of the Week, said he had a history of routinely labeling prominent left-wing German journalists, intellectuals and politicians as anti-Semites.

Mr. Broder and Mr. Augstein found themselves on opposite sides of a debate last year when Günter Grass, Germany’s Nobel Prize-winning author, provoked an international controversy with a poem critical of Israel.

Mr. Augstein wrote at the time that “one should thank Grass” for starting the debate about the threat Israel posed to peace.

Rabbi Cooper said he had never met Mr. Broder, who was not consulted about the controversial list, but added: “On the issue of anti-Semitism, he has the respect of a lot of people around the world.”

Der Spiegel itself acknowledged the Augstein affair had put it in a bind. As the adopted son of the late Rudolf Augstein, the magazine’s founder, the journalist is part-owner of its publishing house.

“We didn’t want to attack him, because we believe that the accusation against him is wrong,” Der Spiegel wrote this week. “But we could hardly defend him, because every reader would expect us to defend him.”

It said it had invited Rabbi Cooper to debate the issue with the journalist.

However, Rabbi Cooper told Rendezvous he wanted Mr. Augstein to apologize in advance for the comments that had led to his inclusion, including one in which he asserted that ultra-Orthodox Israelis “follow the law of revenge.”

Other organizations have come out in support of the Simon Wiesenthal Center’s accusations.

Moshe Kantor, the head of the European Jewish Congress, told the Jerusalem Post that Mr. Augstein was among journalists and opinion-shapers who had “used their columns to promote hate and fear of the Jewish state and the Jewish people.”

The U.S.-based Anti-Defamation League told the Israeli newspaper that the journalist’s references to a powerful Jewish lobby and a war-mongering Israeli government fell into the category of “conspiratorial anti-Semitic thinking.”

Der Freitag, a magazine that Mr. Augstein founded, has rejected the accusations against him and suggested his attackers were conflating criticism of Israel with anti-Semitism.