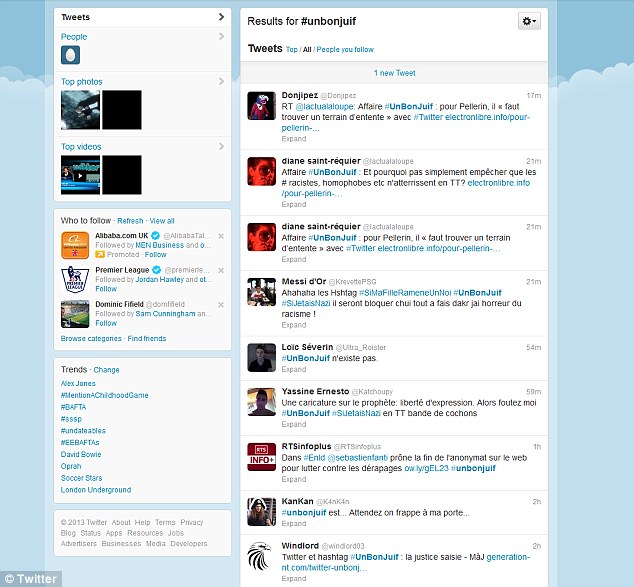 Twitter has been ordered to release the identities of anti-Semitic users in France, as well as pay a $1,300 fine for every day it fails to comply.

The ruling was handed down today by a grand court in Paris, ending a months-long debate over free speech and privacy rights in the European legal system.

The case was brought to the courts by France’s Jewish student union, UEJF, after a slew of tweets last fall included the hashtag #UnBonJuif, or #AGoodJew. The term was accompanied by anti-Semitic suffixes, like “is a dead Jew” or “must be cooked.”

France has strict laws against hate speech and anti-Semitism, and UEJF asked Twitter to reveal the names of the posters. When Twitter refused, the students looked to the courts.

“It is a major precedent and breakthrough in the attempt to balance privacy online with the need to combat hate speech,” Sacha Reingewirtz, vice president of the students’ union, told JTA.

Reingewirtz told reporters that his group tweeted the news early Thursday, and had already received some anti-Semitic messages in response.

UEJF’s lawyer, Stéphane Lilit, added she intends to use the full force of the law to ensure Twitter complies to the ruling.

“If Twitter does not live up to its obligations, we will return before the same magistrate and demand Twitter’s conviction and financial penalties,” she said.

“Like any democracy, the social networks also need to defend themselves, and the first step is to deny those who spread hate speech in anonymity as something to hide behind.”

Moshe Kantor, president of the European Jewish Congress, added that his group would “use this to lobby other European countries to join in this combat against anti-Semitism.”

The suit was filed last October and the court case included just two weeks of hearings. Today’s verdict was handed down by Judge Anne-Marie Sauteraud.