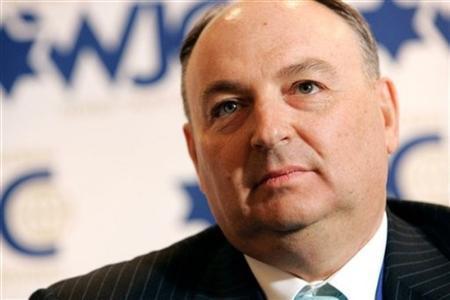 Politicians challenged the rise of neo-Nazi and extremist parties in the European Parliament during a Holocaust Memorial Day event on Wednesday.

European Jewish Congress President Moshe Kantor warned that the parliament contained an increasing number of racists and antisemites, reflecting the dramatic rise in antisemitism across Europe.

“From the late 1920’s to the gas chambers of Auschwitz, most of Europe chose to excuse the fact that populations facing economic hardship could be bought off by scapegoating minorities.

“Today, amid economic turbulence on this continent, national parliaments contain increasing numbers of racists and antisemites. It is to the immense shame of all of us that this European Parliament also contains such people,” he said.

Dr Kantor, who was speaking at the HMD event, urged: “European citizens to work together so that never again will such barbarism and intolerance befall our continent.”

During a Monday press conference in Strasbourg, the Jewish politician said that Greece’s Eleni Zaroulia and Hungary’s Tamas Gaudy-Nagy should be excluded because their party views ran contrary to the democratic nature of the council.

“If one disagrees with the principles represented by this institution and cannot meet the fundamental democratic requirements governing that institution, they should not participate in its activities,” she said.

She added that both parties were “neo-fascist, racist and antisemitic”.

According to reports, Assembly President Jean-Claude Mignon has opposed Ms Nirenstein’s call for a review.

“It is not the job of the Assembly to tell the Hungarians or the Greeks, ‘You voted correctly’ or ‘You didn’t vote correctly”, he said.

Jobbik’s deputy leader Marton Gyongyosi, who last year called for a “list of Hungarian Jews” because they pose a security risk, will begin a national tour to discuss the Zionist threat.

“Relying on its huge lobbying and blackmailing potential, Zionism has deployed all its strength to launch a global campaign to discredit Jobbik,” Hungary’s third-largest party said in a statement last Friday.