In London’S Sunday Times, Picture Worth A Thousand Anti-Semitic Words 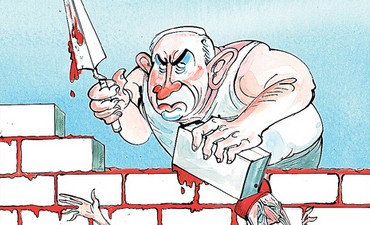 January 27 was International Holocaust Remembrance Day. That same day, The Sunday Times of London published an editorial cartoon showing a hook-nosed Israeli Prime Minister Benjamin Netanyahu building a wall on the bodies of Palestinians and using their blood as mortar.

Michael A. Salberg, International Affairs Director of the Anti-Defamation League described the cartoon as having “a blatantly anti-Semitic theme and motif which is a modern day evocation of the ancient ‘blood libel’ charge leveled at Jews.”

In answer to this and other criticism, a spokesperson for The Sunday Times said, “This is a typically robust cartoon by Gerald Scarfe. The Sunday Times firmly believes that it is not anti-Semitic. It is aimed squarely at Mr. Netanyahu and his policies, not at Israel, let alone at Jewish people.”

In The Commentator, Raheem Kassam described the cartoon as “not simply treading the fine line between criticism and blood libel, but indeed spitting all over it, leaving it for dust, and careering head first into anti-Semitismsville.” He continued:

I would never have thought the editors of the Sunday Times were in amongst those who would seek, in true Der Sturmer fashion, to use Holocaust Memorial Day to publish a blood libel, and knowingly undermine the memory of one of the worst genocides ever…. I guess I was wrong on that count.

Just so. Flowing blood, hook-nosed Jews and their innocent victims feature in both the Sunday Times cartoon and this one from Der Stürmer. It was published in 1934, before the fires of the Holocaust burned their hottest and certainly fueling them.

It is perverse that an image like the Scarfe cartoon pollutes the pages of a mainstream news outlet, using the same imagery as Nazi propaganda, on Holocaust Remembrance Day. And it is beneath contempt for editors to deny the hatefulness of this imagery.

In “How one British paper decided to depict living Jews on Holocaust Memorial Day,” Adam Levick of CiF Watch, an independent project of CAMERA, wrote:

In light of the Sunday Times’ decision to publish a cartoon on Holocaust Memorial Day depicting a blood-lusting Jewish leader, as well as recent comments by British MP David Ward suggesting that, on Holocaust Memorial Day, Jews should learn to stop “inflicting atrocities on Palestinians”, as well as other routine debasements of Holocaust memory, here’s a simple, if counter-intuitive request to those who believe that the Holocaust means anything at all:

Spare us your Holocaust pieties, your monuments, your memorials, museums and days of remembrance, and consider that, instead of honoring Jews murdered over 65 years ago, you may want to begin, instead, to honor Jews who are still among us.