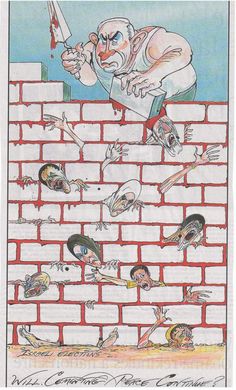 European Jewish Congress President Dr. Moshe Kantor called for an apology Sunday from Britain’s Sunday Times, which published a cartoon of Israel’s Prime Minister Binyamin Netanyahu building a wall on the bodies of Arabs. The cartoon, which appears on International Holocaust Remembrance Day, depicts the blood of the Arabs as cement.

Many observers found the cartoon reminiscent of blood libels against Jews, and noted a similarity to anti-Semitic cartoons published by Nazi newspaper Der Stürmer in the leadup to the Holocaust.

In case you think someone might be stretching the comparison and seeing anti-Semitism where none exists, here’s a blood libel cartoon from Der Stürmer:

The simple truth is this:

When people are overtly anti-Semitic in their attempts to criticize the Israeli government, it gets more difficult for those of who aren’t anti-Semites to do so.

In other words, rather than successfully making public a critique of the Netanyahu government, disgusting cartoons like this one can actually have a chilling effect on other critics of the Israeli government.

It’s very easy to make compelling arguments against the right-wing government of Benjamin Netanyahu without even the slightest whiff of anti-Semitism … which is why a cartoon like this makes clear that some critics of Israel’s government just hate Jews in general.