Why Won’t Europe State The Obvious About Hezbollah? 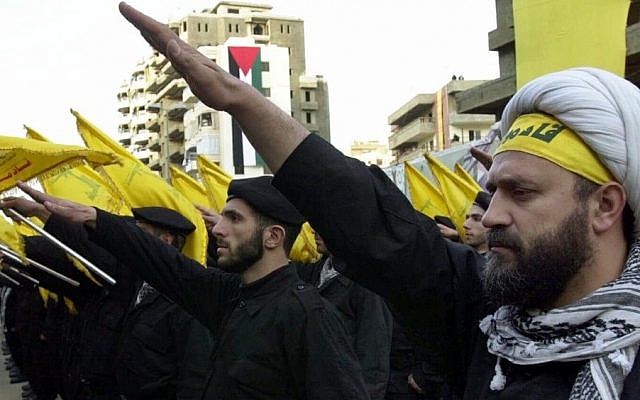 Everyone knows the Lebanese Shiite group is a terrorist organization, especially the French. But even Bulgaria’s indictment may not change what one US legislator calls an ‘indefensible’ EU policy

Now that a Bulgarian investigation has confirmed that Hezbollah is responsible for the bus bombing last July in Burgas that killed six civilians, more and more voices are demanding that the European Union place the Shiite group on its list of terror organizations. EU officials said Wednesday they would reassess their stance, but experts remain doubtful that anything will change.

The West didn’t need a Bulgarian police report to know Hezbollah is a terrorist organization. Even Turkey includes Hassan Nasrallah’s militia in its official list of terrorist groups. So why is it that the EU refuses to state the obvious, and thereby help prevent terrorism and save lives?

Officially labeling Hezbollah a terrorist entity would significantly hamper its ability to operate. But doing so requires unanimity among the EU’s 27 member states.

“We strongly urge other governments around the world – and particularly our partners in Europe – to take immediate action to crack down on Hezbollah,” incoming US Secretary of State John Kerry said Tuesday.

The chairman of the House Foreign Affairs Committee, Ed Royce, made it even clearer. “Now that Hezbollah has been found responsible for an attack on a European Union member nation, the EU must designate it as a terrorist organization,” he demanded Tuesday, calling the EU’s refusal to do so “indefensible.”

In 2012, 268 members of Congress signed a bipartisan letter to the president and ministers of the Commission of the European Union, urging them to include Hezbollah on the European Union’s list of terrorist organizations.

Even within Europe calls are being heard urging Brussels to act. “It is important that the EU respond robustly to an attack on European soil,” British Foreign Secretary William Hague said after the Bulgarian report was published, promising to discuss with his European colleagues “measures we can now take to continue to make our citizens safer.” (The UK and Netherlands already do recognize Hezbollah as a terrorist organization.)

Unsurprisingly, the Israeli government and Jewish groups have also made use of the Burgas probe – which confirmed that the July 18 attack was committed by individuals belonging to Hezbollah’s military wing – to reiterate their longstanding demand that Brussels change its policy.

“It’s time that the international community branded Hezbollah for the terrorist organization that it is,” Prime Minister Benjamin Netanyahu said.

European Jewish Congress president Moshe Kantor, too, called on the EU to add Hezbollah to its terror list “without delay or reservation.” Such a decision “should not be subject to political considerations,” he said.

But the fact of the matter is that it is subject to political considerations. And it is no secret who is behind the foot-dragging.

“We know that the French government has until now been reluctant to back other European countries with respect to Hezbollah. But Burgas has shown that Islamist terrorism is not just happening in Mali, it is not just happening in the Middle East, it is also happening right here in Europe, and it must be stopped,” said Ronald Lauder, the head of the World Jewish Congress.

Lauder said he planned to meet with French President François Hollande on Wednesday to urge him to back Hezbollah’s inclusion on the European Union’s terror list. “The European Union must stop dithering and treat Iran and Hezbollah for what they are: leading sponsors of international terrorism,” Lauder declared before the meeting.

Among policy analysts it is indeed clear that the French are behind the EU’s refusal, and had actually been pressuring Bulgarian authorities not to name Hezbollah so as not to up the pressure on them.

But why is France so reluctant to call a spade a spade? After all, the country has experienced firsthand the deadly effects of Hezbollah terrorism.

In 1983, Islamic Jihad, Hezbollah’s predecessor organization, sent two suicide bombers to attack American and French troops in Beirut. Among the 299 dead were 58 French paratroopers, in what is said to have been the single worst military loss for Le Grande Nation since the end of the Algerian War in 1962.

“They have unfinished business with Hezbollah, but nevertheless they accept it,” said Tsilla Hershco, a senior research associate at the Begin-Sadat Center for Strategic Studies at Bar-Ilan University who specializes in France’s involvement in the Middle East conflict. “Lebanon and Syria are historically a bastion of French influence, and they want to keep it that way – even if the price is maintaining relations with an organization that killed French soldiers.”

One often-quoted argument says Hezbollah is also a political party and therefore Europe shies away from categorizing it as a terror group. But the EU’s terror list does include Hamas, which won the Palestinian legislative elections in 2006, as well as the militant Communist Party of the Philippines, the Kurdistan Workers’ Party (PKK) and other groups that are involved in their countries’ political systems.

Obviously, there must be other reasons for the stubbornness of the French and their supporters, Germany among them. According to Matthew Levitt, the director of the Washington Institute for Near East Policy’s counterterrorism and intelligence program, the Europeans are afraid to stir up a hornet’s nest.

“Hezbollah is not very active in Europe. The Europeans feel that if you poke Hezbollah or Iran in the eye then they will do the same to you. If you leave them alone, then maybe they will leave you alone,” Levitt said.

France had particular cause for concern, Levitt told The Times of Israel, regarding ”what will happen to French UNIFIL [United Nations Interim Force in Lebanon] personnel, civilian and military, and they are also worried about the stability of Lebanon itself.”

UNIFIL currently consists of a total of 11,026 peacekeepers from 37 countries. France sent 878 troops. Among EU countries, only Italy sent more: 1,097.

But none of there are sufficient reasons to stall efforts to label Hezbollah a terrorist group, argues Levitt, a former deputy assistant secretary for intelligence and analysis at the US Treasury and an ex-FBI counterterrorism analyst.

“Hezbollah is now reengaging in international terrorism in a very serious way, both to avenge the assassination of [its terror chief] Imad Mughniyeh [in 2008, allegedly by Israel], and separately, as part of its longstanding war with the West,” he said. The organization has been increasingly recruiting European operatives, such as the individuals who recently planned attacks in Cyprus and Thailand.

“There’s been a tremendous increase in Hezbollah international activity, including in Europe,” Levitt asserted. Cyprus will publish a report about a botched attack there last year that is likely to again incriminate Hezbollah. “There will be a lot of pressure on Europe to do more,” he predicted.

To be sure, it is not only Paris that refuses to blacklist Hezbollah. “There are lots of other countries that follow the French lead,” according to Levitt. “The Germans have already turned the corner a little bit; they’re willing to talk about it. But the real issue is turning France.”

On Wednesday, a spokesman for German Chancellor Angela Merkel said that ”if the evidence proves to be true that Hezbollah is indeed responsible for this despicable attack then consequences will have to follow.”

If the EU does make the decision to blacklist Hezbollah, it would have serious ramifications. For one, European authorities could cut off Hezbollah funding and prevent its operatives from traveling freely. Also, says Levitt, “the lack of a EU designation prevents some European countries from opening up Hezbollah investigations in the first place. They’re only investigating when Hezbollah breaks a law or engages in criminal activity. But they’re not able to investigate Hezbollah [actions] as terrorism cases. That would probably be the most important thing.”

In a first reaction Tuesday, EU foreign policy chief Catherine Ashton said the implications must be “assessed seriously,” stressing the “need for a reflection over the outcome of the investigation.” Member states will discuss the appropriate response “based on all elements identified by the investigators,” Ashton stated.

On Wednesday, EU foreign affairs spokeswoman Maja Kocijancic told reporters that the organization would “look into several options” regarding its response to the Burgas report. Including Hezbollah on the terror list “is one of them but not the only one.”

France is similarly vague. The French ambassador in Israel, Christophe Bigot, declined to be interviewed for this article, instead referring The Times of Israel to Paris, where a spokesman for the Foreign Ministry, Phillipe Lalliot, said France had “taken note” of the Bulgarian report and would “draw conclusions” in coordination with other EU states. “Various options are being weighed,” Lalliot told reporters.

All this doesn’t bode well for those who hoped the report from Sofia would be an instant game-changer. Despite all the evidence that Hezbollah was behind the Burgas bombing, France and other EU states might still refuse to list it as a terrorist organization, Levitt said. “I think that’s just an unwise policy in and of itself. But if that’s their position, we’ll have to contend with it.”

Hershco, the Begin-Sadat Center expert, seemed to believe that not much would change.

“The report is very embarrassing for the French but they will stick to their policy, trying to keep good relations with the Lebanese government – and Hezbollah is the strong party there,” she said. “The French are very consistent in their policy. If they have a line of policy, they adhere to it.”

As long as France hides behind the absence of near-unattainable unanimity and doesn’t clearly take a stand, the EU’s “Common Position 2001/931/CFSP on the application of specific measures to combat terrorism” is unlikely to be amended to include Hezbollah.

In other words, if France sticks to its guns, so will Hezbollah – literally.

“Failure to [list the organization as a terrorist group] will only give these killers the opportunity to further organize, recruit, raise funds, and carry out additional terrorist attacks across the continent,” Royce, the chairman of House Foreign Affairs Committee, said. “The EU’s indefensible policy on Hezbollah makes defending all of us from Iranian-backed terrorism even more difficult.”