Cameron: Help Me Kick Hizbollah Out Of Europe 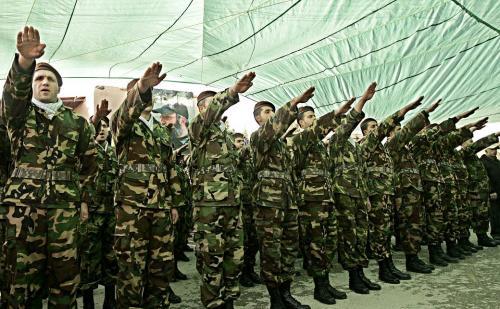 David Cameron has asked the Jewish community to help him persuade the European Union to proscribe Hizbollah.

At his meeting last month with the Jewish Leadership Council, the Prime Minister urged its members to “make a noise” and lead a grassroots campaign calling for the EU to take action against the Iranian-backed terror group.

The push to secure a Europe-wide ban was stepped up this week after Bulgarian authorities blamed Hizbollah for the bombing which killed five Israeli tourists in the Black Sea resort of Burgas last July.

At the meeting in Downing Street, JLC members urged Mr Cameron to use his influence to push EU foreign policy chief Baroness Ashton and EU member states to do more to work towards proscription.

At the moment the EU classifies Hizbollah as a social welfare organisation.

To proscribe Hizbollah requires consensus among all 27 EU members. The move would freeze Hizbollah accounts and funding, hitting its European operations and terrorist activities.

It is understood the Prime Minister is keen to lead the push for proscription, but Mr Cameron wants to be able to show reluctant EU nations the the strength of support for action against Hizbollah within Britain.

French President François Hollande, for example, has been unwilling to reclassify Hizbollah, despite committing troops to tackling terrorism in Africa.

The Bulgarians are believed to have told Mr Cameron that France and Germany asked for the report into the Burgas murders to minimise Hizbollah’s level of responsibility.

In response to Mr Cameron’s plea for assistance, the Jewish community has moved into “top gear”, with leading organisations including the JLC and Board of Deputies urging supporters to increase pressure on those in influential positions.

A briefing pack produced by the JLC and Community Security Trust was released this week. It lists concerns over Hizbollah’s activities and cites money laundering, drugs smuggling and its influence in the conflict in Syria as examples of the wider, non-Israel-related threat posed by the group.

In a joint statement, the JLC, Board of Deputies and CST said Hizbollah’s involvement in the Burgas bombing “shows the EU’s denials have been futile and self-defeating. We call on the UK government to take the lead in pressing the EU to ban Hizbollah before it murders more people”.

The US, Israel, Canada and the Netherlands are the only countries which currently list Hizbollah as a terrorist organisation in its entirety – both its political and military wings.

Foreign Secretary William Hague led the British response to the Burgas findings, saying the EU must “respond robustly to an attack on European soil”. Mr Hague said he and Home Secretary Theresa May would put pressure on European counterparts to do more on the issue.

The British campaign is part of a worldwide response from Jewish groups including the World Jewish Congress, B’nai B’rith International and the European Jewish Congress.

Moshe Kantor, EJC president, said: “I hope the smoking gun of Burgas will finally lay to rest the argument that Hizbollah’s activities can be described as political in any way, shape or form.

“This has been a long battle but Europeans will be that much safer the day after this long-awaited proscription takes place.”

Newly-appointed US Secretary of State John Kerry said he “strongly urged other governments around the world – and particularly our partners in Europe – to take immediate action to crack down on Hizbollah.

“We need to send an unequivocal message to this terrorist group that it can no longer engage in despicable actions with impunity.”

Meanwhile, the Financial Times’s Middle East and North Africa correspondent, Borzou Daragahi, was forced to make a public apology after suggested in a tweet that Israel may have bribed Bulgaria in order to frame Hizbollah.

He wrote: “I don’t doubt Hizbollah/Iran could be behind Bulgaria bombing, but also think Israel could pay Sofia to say anything.”