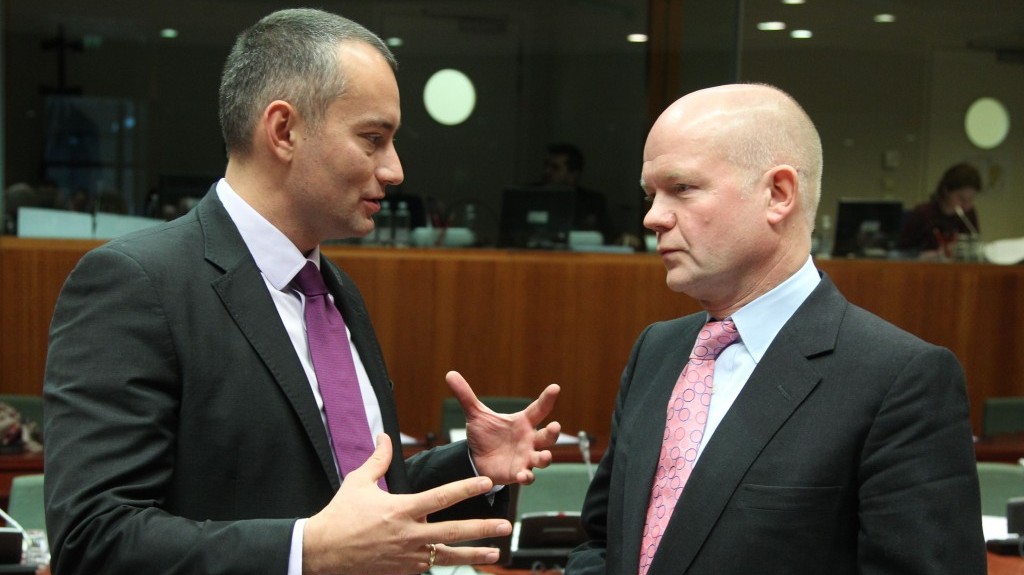 EU Foreign Ministers on Monday heard a statement by Bulgarian Foreign Minister Nickolay Mladenov on the results of his country’s probe into the bus bombing in Burgas, which killed five Israeli tourists and a Bulgarian driver in July.

However, reported the European Jewish Press (EJP), despite the fact that the Bulgarian probe links the terrorist attack to Hizbullah, the ministers didn’t take any decision to add the group to the EU list of terror organizations.

The Bulgarian Foreign Minister had “asked to make a statement about the ongoing situation” regarding Hizbullah, EU foreign Minister Catherine Ashton said upon her arrival at the EU Foreign Affairs Council meeting Monday morning.

EJP quoted Ashton as having added that she was committed to looking “very carefully at what he says and what the issues now are.”

“The EU ministers will probably analyze the Bulgarian report before taking any decision, which can take some time,” a diplomatic source told EJP.

Any decision to blacklist the terror group needs the unanimity of the 27 member states, noted the report.

“We believe the attack that happened in Burgas last year was organized by people connected to the military wing of Hizbullah,” Mladenov was quoted as having said during the meeting.

The Bulgarian minister told his colleagues that the investigation was “ongoing” and that his country’s was in contact with the Lebanese, Canadian and Australian authorities, as well as with Europol, the European Union’s law enforcement agency.

Although the identities of the three perpetrators have not been confirmed, it was reported that the three were Lebanese natives in possession of foreign passports – two of them hailing from Canada and one Australian.

Key incriminating factors are thought to include a computer printout in Beirut, DNA traces on a used SIM card and several suspicious telephone calls, reported EJP.

Asked whether that meant the EU should blacklist the movement, he replied, according to EJP, “Given the fact that we’ve already made quite firm statements about where we believe the responsibility for that attack lies, I think the answer is quite obvious.”

“We in Europe need to take collective measures to make sure that such attacks will never happen again on EU soil, that we are protected as the EU,” he said.

“We must send a strong message to the rest of the world that activities like this are unacceptable, no matter where they are planned or executed,” he added.

Only two EU countries currently label Hizbullah a terrorist organization—the UK and the Netherlands. The UK blacklists only what is known as the military wing of the organization.

France appeared to have softened its traditionally staunch opposition to blacklisting Hizbullah, saying “all options” were on the table, provided the evidence is strong.

Bulgaria’s announcement that Hizbullah was being the attack in Burgas has led to renewed calls from Washington and Israel on the 27-nation EU to designate the group a “terrorist” organization.

U.S. Secretary of State John Kerry urged the EU to follow Washington’s lead by designating Hizbullah as terrorists in a move that will notably lead to a crackdown on its fund-raising activities.

Bulgaria’s Interior Minister Tsvetan Tsvetanov reiterated on Friday his belief that two of the attackers in the bombing are part of Hizbullah, noting that naming the group as being behind the attack was not done under pressure.

Shortly after the Burgas bombing, the EU decided not to list Hizbullah as a terrorist group.

Cypriot Foreign Minister Gujarat Cossack-Marcolis said at the time that “there is no consensus on the issue, because Hizbullah also has an active political arm.”

She added that the matter is open for reconsideration if “tangible evidence” that Hizbullah is involved in terrorist activity can be brought.

European Jewish Congress President Dr. Moshe Kantor expressed deep concern about the issue, saying “It is deeply disappointing and inexplicable that the EU Foreign Affairs Council is continuing to prevaricate over a decision proscribing Hizbullah, particularly since the Bulgarian government confirmed evidence proving Hizbullah was behind the murderous terror attacks which took place in Burgas during July last year. It is very hard to find any reason other than the fact that this issue has been inexcusably politicized.”

“A terrorist attack took place on European soil and the brazen perpetrators are being ignored…it once again casts doubt on the important role of the European Union in the Middle East peace process.”