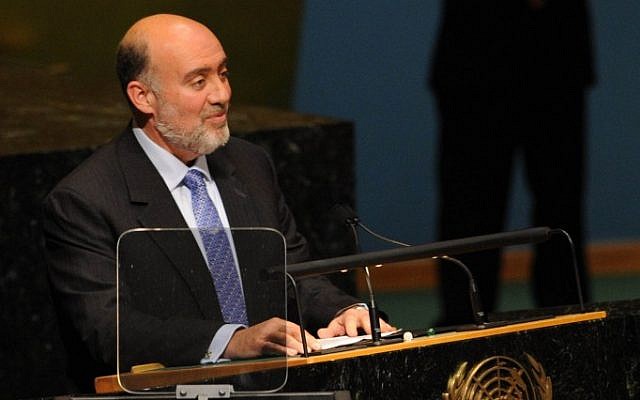 Glorification of terrorists is ‘one of the greatest obstacles to peace in the Middle East,’ says Israel’s ambassador to the UN

Israel’s ambassador to the United Nations on Monday condemned the decision by a French city to bestow honorary citizenship on a man convicted of having assassinated an Israeli minister.

The statement was the first response from an Israeli official to the award.

“The glorification of terrorists who deliberately murder innocent civilians is one of the greatest obstacles to peace in the Middle East. It must be condemned loudly and clearly,” Ron Prosor posted on his Facebook profile.

Last month, the city of Bezons, located 10 miles northwest of Paris, honored Majdi Rimawi, calling him a “victim of the occupation.” Rimawi, a member of the Popular Front for the Liberation of Palestine, is serving a life sentence for the 2001 assassination of former Israeli tourism minister Rehavam Ze’evi.

“This appalling act made me wonder: What’s next for the city of Bezons? Giving honorary citizenship to Anders Breivik? Or Osama bin Laden?” Prosor wrote. He was “shocked” when he read about Bezons’ decision, and said that Rimawi was also responsible for the deaths of many other Israeli citizens, Prosor added.

In an article dedicated to the event in Bezons’ city bulletin, Rimawi’s crime was not mentioned. “Majdi al-Rimawi has been locked up for more than 10 years in an Israeli jail. His crime? Defending his city and its inhabitants; demanding the application of international law by giving Palestine back its 1967 borders and recognizing East Jerusalem as its capital as recognized by the UN. For this he was sentenced to life plus 80 years in prison,” the bulletin noted.

In his speech during the February 13 event, Bezons’ mayor Dominique Lesparre, who belongs to the Communist party, reportedly called Rimawi a “victim.”

Bezons’ honor for Rimawi was also criticized by Jewish groups in Europe and the US.

“This award is an insult to the French concept of justice and liberty and a perversion of French values,” said Abe Foxman, the national director of the Anti-Defamation League. “Al-Rimawi is a convicted terrorist and the PFLP is on the European Union’s list of terrorist organizations. There can be no justification for honoring him.”

By honoring Rimawi, Bezons “is callously encouraging more violence against Jews and it is important for all sectors of French society to counter this message and condemn the award,” Foxman said.

The European Jewish Congress also slammed Bezons’ decision. “This is an outrageous and horrific decision, not just to honor a murderer, but the murderer of an Israeli government cabinet minister,” EJC President Moshe Kantor said. “Today is exactly a year since the terrible and tragic murder of Jewish schoolchildren in Toulouse and the honoring of al-Rimawi in France demonstrates that murder and terrorism is being glorified when it should be condemned in all forms.”

Kantor called on the French authorities to “immediately remove this stain on the French landscape out of respect for a friendly government, the people of France and tolerance.”

Rimawi, 48, commanded and dispatched the two-man team that shot dead Ze’evi on October 17, 2001, in a Jerusalem hotel. He was also involved in arming and dispatching a terrorist team that booby-trapped two cars in the city of Yehud, near Tel Aviv, in July 2001, injuring six Israelis.