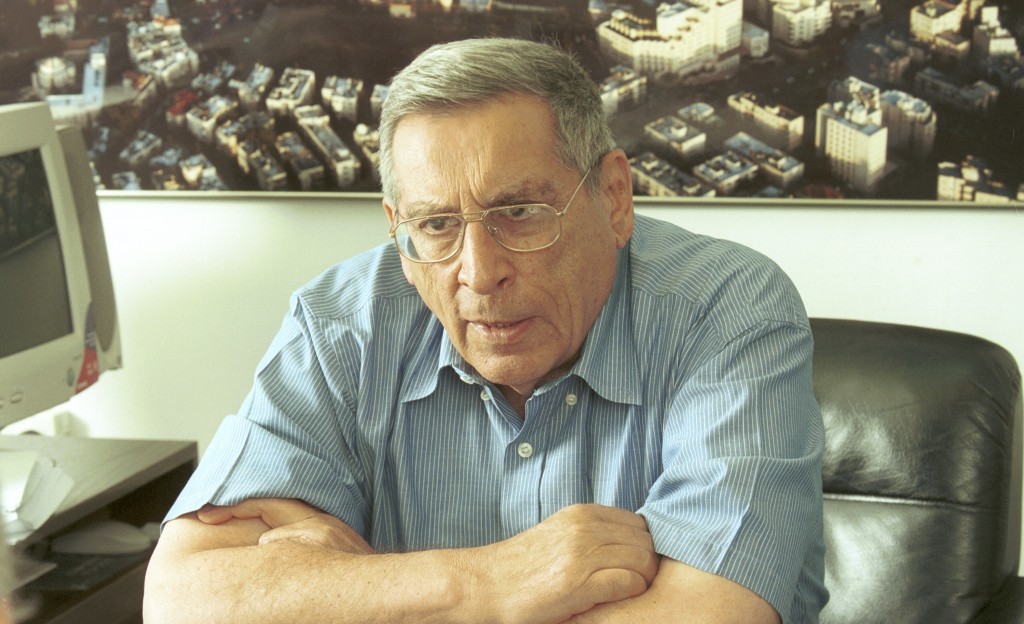 Rehavam Ze’evi, assassinated in 2001, was an officer in the IDF General Staff. He founded the Moledet party with the sole aim of advocating the voluntary transfer of Palestinians from Gaza and the West Bank to Arab countries. He was shot and killed by Hamdi Quran, a member of the Popular Front for the Liberation of Palestine, which planned the killing in retaliation for the IDF killing of PFLP leader Abu Ali Mustafa in 2001. (Quran was serving a life sentence for this crime in a PA jail in Jericho. The IDF was able to remove him and transfer him to Israel where Quran was again sentenced to life imprisonment for the killing of Ze’evi in 2007.) Majdi Rimawi was sentenced in 2008 for his role in PFLP’s planning of the assassination. Photo by Reuters.

The French town of Bezons granted “honorary citizenship” to Majdi Rimawi, who was jailed by Israel for his alleged role in the 2001 assassination of the then-tourism minister Rehavam Ze’evi in Jerusalem. The decision was hailed by the Palestinians.

Yedioth Ahronoth newspaper stated on Monday that Rimawi was given this citizenship because Bezons mayor Dominique Lesparre, a member of the French communist party, has a sister-city agreement with the West Bank town Beit Rima where Rimawi’s family lives.

Bezons and Rimawi’s hometown have been sister towns since 2008.

The Bezons monthly newsletter cited Bezons mayor Dominique Lesparre as saying that honoring Rimawi was due to the “colonization of the Palestinian people.”

The monthly newsletter stated that it was a unanimous decision taken by the Bezons local council to honor Rimawi, whose act was to defend his town and its inhabitants, calling for enforcing the international law for the establishment of Palestine within the 1967 borders as recognized by the UN, and Jerusalem as its capital.

Rimawi’s wife, Fathiya, was presented with a plaque honoring her husband as a brave political prisoner at a ceremony held in France last February.

According to his personal blog, mayor Lesparre stated in a speech at the ceremony that Rimawi was “imprisoned for the last 10 years for having participated, with his people, in the struggles of the Palestinian resistance against the occupation of his country and his fight for freedom.”

“Majdi is a direct victim of this occupation… As are the 4,500 Palestinian resistance [fighters] who were imprisoned for having dared to defend their country against an occupier whose military means are oversized and whose methods constantly violate UN resolutions and international law,” according to a transcript of his speech.

Rimawi, with three other Palestinians, were convicted of Zeevi’s assassination in 2001. The four are members of the Popular Front for the Liberation of Palestine, which affirmed then that the assassination was in retaliation to Israel’s assassination of Abu Ali Mustafa, the PFLP secretary-general, in the same year.

Zeevi, who had founded the right-wing nationalist Moledet party, had advocated the mass murder of the Palestinians and their ouster from the West Bank and the Gaza Strip.

For its part, the PFLP, like other Palestinian resistance factions, saluted the Bezons local council for its decision and described it as supportive of the just cause of the Palestinian prisoners.

French city of Bezons grants honorary citizenship to Majdi Rahima Rimawi, who was convicted by Israel for his role in the 2001 assassination of then-Tourism Minister Rehavam Ze’evi in Jerusalem • European Jewish Congress condemns the move.

The city of Bezons, a suburb of Paris, decided last month to grant honorary citizenship to Majdi Rahima Rimawi, the terrorist who was convicted and sentenced to life in prison plus 80 years by Israel for his role in the 2001 assassination of then-Tourism Minister Rehavam Ze’evi.

The population of Bezons stands at some 28,000 residents. The mayor is Dominique Lesparre, a member of the French Communist party. Bezons has a sister-city agreement with Bani Zeid, the West Bank town where Rimawi’s family lives.

An inscription on the plaque prepared by Bezons refers to Rimawi as a “political prisoner.”

In a speech, Lesparre justified Rimawi’s actions, calling him a “victim.”

Ze’evi was shot dead at a Jerusalem hotel Oct. 17, 2001, during the Second Intifada. The Popular Front for the Liberation of Palestine (PFLP) was responsible for the assassination. Ze’evi is the only Israeli government minister to have ever been killed in an Arab terrorist attack.

“This is an outrageous and horrific decision, not just to honor a murderer, but the murderer of an Israeli government cabinet minister,” said EJC President Dr. Moshe Kantor. “Today is exactly a year since the terrible and tragic murder of Jewish schoolchildren in Toulouse and the honoring of Rimawi in France demonstrates that that murder and terrorism is being glorified when it should be condemned in all forms.”

“We call on the French authorities to immediately remove this stain from the French landscape out of respect for a friendly government, the people of France and tolerance,” he added.

“It is inconceivable that an elected figure can be so ignorant as to call a cold-blooded murderer a victim,” Kantor said, referring to Lesparre. “This is the kind of ignorance that leads to people like Mohammed Merah perpetrating the murder of children because they are Jewish. This type of glorification of murder is sending a very ominous message to the next Merah.”

Mohammed Merah killed Rabbi Yonatan Sandler, his two eldest children and the daughter of the principal of the Ozar Hatorah Jewish school in an anti-Semitic attack in Toulouse last March.

Majdi Rimawi, in jail for killing of tourism minister Rehavam Ze’evi, is the first honorary citizen of the town of Bezons

By Elhanan Miller, Times of Israel

The city of Bezons, located 10 miles northwest of Paris, honored Majdi Rimawi on February 13, calling him a “victim of the occupation.” Rimawi, a member of the Popular Front for the Liberation of Palestine, is serving a life sentence for the 2002 assassination.

Rimawi, 48, commanded and dispatched the two-man team which shot dead the Israeli minister on October 17, 2001 in Jerusalem’s Hyatt hotel. He was also involved in arming and dispatching a terrorist team which booby trapped two cars in the city of Yehud, near Tel Aviv, in July 2001, injuring six Israelis.

“This is a strong political act,” said mayor Dominique Lesparre at the honorary citizenship ceremony, according to Palestinian Media Watch, which wrote about the event. “It is an unequivocal [statement] concerning the [Israeli] colonization of the Palestinian people.”

In an article dedicated to the event in Bezons’ city bulletin, Rimawi’s crime was not mentioned.

“Majdi Al-Rimawi has been locked up for more than ten years in an Israeli jail. His crime? defending his city and its inhabitants; demanding the application of international law by giving Palestine back its 1967 borders and recognizing East Jerusalem as its capital as recognized by the UN. For this he was sentenced to life plus 80 years in prison,” the bulletin noted.

Last October the municipality of Paris signed a cooperation agreement with the Palestinian district of Jerusalem, recognizing “East Jerusalem” as a distinct entity for the first time.

A French mayor whose municipality recently honored the Palestinian murderer of an Israeli minister defended the move and accused critics of “hatred” and “complicity in occupation.”

Mayor Dominique Lesparre of the Paris suburb of Bezons said in a statement released on Wednesday that his municipality’s vote last month to name Majdi Al-Rimawi an honorary resident was part of a “tradition of peace, solidarity and cooperation with the Palestinian people.”

An Israeli court convicted Rimawi, a member of the terrorist organization Popular Front for the Liberation of Palestine, for the murder of Knesset member Rehavam Ze’evi in Jerusalem in 2001, along with three other shooters. Ze’evi was Israel’s minister of tourism.

The decision to honor Rimawi, who is imprisoned in Israel, was made known in the city’s official newsletter in an article which said his only crime was to strive toward the establishment of a Palestinian state. The article did not mention the murder.

It triggered strong-worded condemnations from the Israeli government, the CRIF umbrella group of French Jewish communities, and the European Jewish Congress, whose president Moshe Kantor called the move “outrageous and horrific.”

Lesparre called these reactions “hateful,” adding: “It strengthens our resolve to defend the noble and just Palestinian cause.”

“It does not surprise us that this act of solidarity invokes hostile reactions by some of the participants of the occupation of Palestinian territories,” Lesparre said. “Any criticism of Israeli leaders or reference to the Palestinians’ suffering is systematically condemned as anti-Semitic.”