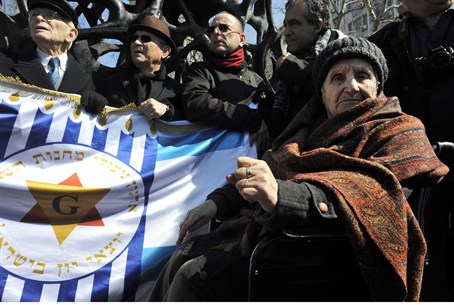 Thessaloniki commemorated the 70th anniversary of the first deportation of its Jews to Auschwitz.

Greece’s second largest city, Thessaloniki, on Saturday commemorated the 70th anniversary of the first deportation of its Jews to the Auschwitz concentration camp, AFP reported.

Around one thousand people walked in a silent march to the old railway station where the first train left Greece’s northern city for the notorious death camp on March 15, 1943, the report said.

Among the people taking part in the solemn walk was Israeli violinist Ivry Gitlis. Ronald S. Lauder, who heads the World Jewish Congress, and Moshe Kantor, president of the European Jewish Congress, are also attending this weekend’s anniversary events.

“Greek Jews are currently adversely affected by the country’s deep economic problems and by the rise of the extremist Golden Dawn, a movement whose leaders openly deny the Holocaust,” the World Jewish Congress said in a press release quoted by AFP.

The leader of the neo-Nazi party has claimed that Nazi concentration camps did not use ovens and gas chambers to exterminate Jews during the Holocaust.

Greece’s Jewish community expressed alarm following the election of the neo-Nazi Golden Dawn Party to parliament and warned their fellow citizens to oppose the return of fascism.