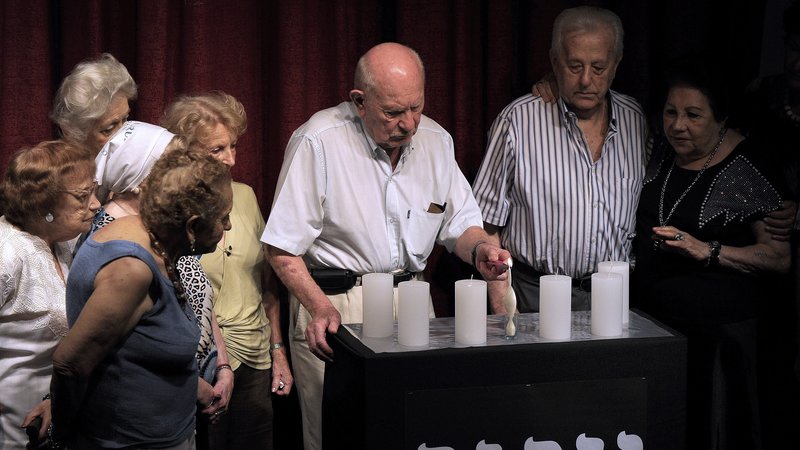 Israel dedicated its annual memorial day for the 6 million Jews killed in the Holocaust to mark 70 years to the Warsaw ghetto uprising, a symbol of Jewish resistance against the Nazis in World War II that resonates deeply in Israel to this day.

At the opening ceremony at nightfall, President Shimon Peres and Prime Minister Benjamin Netanyahu both linked the desperate Jewish revolt of 1943 to the warrior mentality that enabled the establishment of Israel five years later.

“There was a never a rebellion like it. They were so few and their bravery remained as a model for so many,” Peres said at Yad Vashem, Israel’s official Holocaust memorial, before hundreds of Holocaust survivors and their families, Israeli leaders, diplomats and others.

“A clear line exists between the resistance in the ghettos, in the camps and in the forests and the rebirth and bravery of the state of Israel. It is a line of dignity, of renewed independence, of mutual responsibility, of exalting God’s name,” he said, “as a ray of hope which was not extinguished even during terrible anguish. The ghetto fighters sought life even when circumstance screamed despair.”

Netanyahu called the uprising marked “a turning point in the fate of the Jewish people” where they transformed from helpless victims into fearless warriors.

Six million Jews were killed by German Nazis and their collaborators in the Holocaust, a third of world Jewry.

The 1943 Warsaw ghetto uprising was the first large-scale rebellion against the Nazis in Europe and the single greatest act of Jewish resistance during the Holocaust. Though guaranteed to fail, it became a symbol of struggle against impossible conditions, illustrated a refusal to give in to Nazi atrocities and inspired other acts of uprising and underground resistance by Jews and non-Jews alike.

While the world marks International Holocaust Remembrance Day on Jan. 27, the date of the liberation of the Auschwitz death camp, Israel’s annual Holocaust memorial day coincides with the Hebrew date of the Warsaw ghetto uprising.

The Israeli flag flew at half-staff and a military honor guard stood at one side of the podium as poems and psalms were read and the Jewish prayer for the dead was recited.

Peres, an 89-year-old Nobel Peace Prize laureate, also linked the Nazi genocide to Iran’s suspected drive to acquire nuclear bombs and its leaders’ repeated references to the destruction of Israel and its denial of the Holocaust.

He spoke a day after the latest round of international talks aimed at halting Iran’s nuclear development program failed to reach an agreement.

Netanyahu also cited the Iranian threats to destroy Israel and vowed that there will never be another Holocaust.

“The murderous hatred against the Jews that has accompanied the history of our people has not disappeared, it has just been replaced with a murderous hatred of the Jewish state,” he said. “What has changed since the Holocaust is our determination and our ability to defend ourselves.”

On Monday morning, Israel is scheduled to come to a standstill as sirens wail for two minutes. Pedestrians typically stop in their tracks, cars and buses halt on streets and highways and drivers and passengers stand on the roads with their heads bowed.

Further ceremonies include the public reading of names of Holocaust victims at sites around the country, including Israel’s parliament. Schoolchildren dress in white and stop their studies to hold memorial ceremonies.

Hours before the opening ceremony, an annual report by Tel Aviv University on worldwide anti-Semitism said the number of anti-Semitic violence and vandalism jumped 30 percent jump last year, after a two-year decline.

Moshe Kantor, president of the European Jewish Congress, an umbrella group representing Jewish communities across Europe, warned of a sudden upsurge in anti-Semitic attacks and expressed alarm over the rise of extremist parties in Europe – particularly in Hungary, Greece and Ukraine. “Neo-Nazis have been once again legalized in Europe. They are openly sitting in parliaments,” he said.