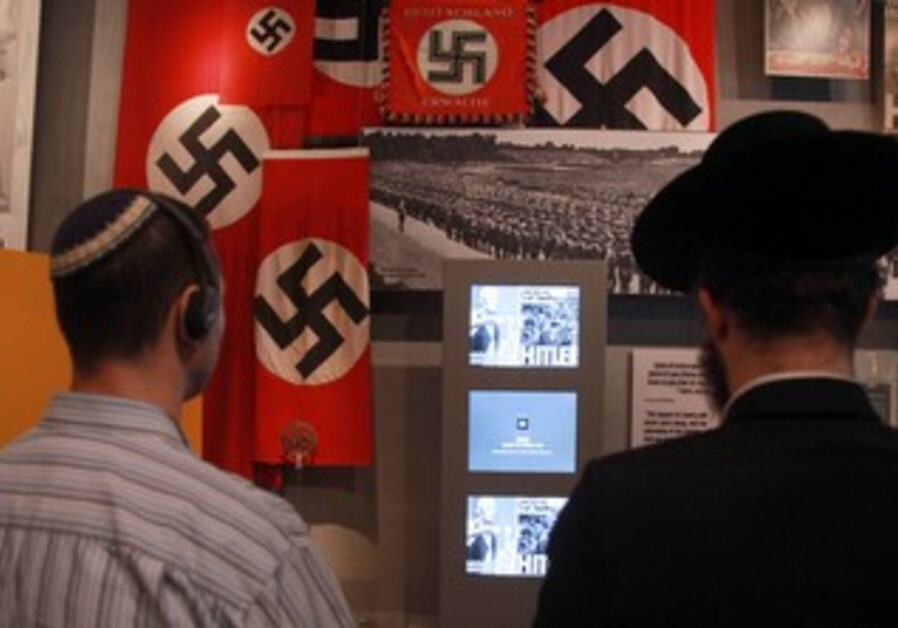 “There is nothing that contradicts Jewish heritage, the values of our country and basic human morality more” than such attacks, Netanyahu says.

Israel came to a standstill on Monday morning at 10 a.m. as the national memorial siren sounded, stopping traffic on the country’s roads and allowing drivers and pedestrians alike to reflect on the horrors of the Holocaust.

In the streets just outside The Jerusalem Post’s editorial offices, ultra-Orthodox residents of the capital stood at attention as the siren blared.

Many among the ultra- Orthodox have taken on a custom to recite psalms during the two-minute commemoration.

After the siren ended, President Shimon Peres and Prime Minister Binyamin Netanyahu took part in a wreath-laying ceremony at Yad Vashem’s Warsaw Ghetto Square in the presence of US Secretary of State John Kerry and senior Israeli officials.

Kerry is in Israel conducting a round of shuttle-diplomacy, with the twin aims of restarting Israeli-Palestinian talks and advancing the reconciliation process between Jerusalem and Ankara that began during US President Barack Obama’s recent trip to the region.

Names of Holocaust victims were recited concurrently at both Yad Vashem and an event at the Knesset that Peres and Netanyahu attended following the wreath-laying ceremony.

A minute of silence was also observed by British Jews, organized by Yom Hashoah UK “at various points across Jewish communities,” according to the Board of Deputies of British Jews.

The British community held a ceremony at Hyde Park in central London at which Chief Rabbi Lord Jonathan Sacks spoke to a crowd of almost 500, said the board.

Finance Minister Yair Lapid spoke on Monday evening at the ceremony of the Ghetto Fighters’ House museum in Kibbutz Lohamei Hagetaot in the Galilee, while B’nai B’rith and Keren Kayemeth LeIsrael-Jewish National Fund held a memorial service in honor of those Jews who “rescued fellow Jews during the years of torment in Europe,” such as Otto Komoly, the president of the Zionist Federation in Hungary, who saved thousands of Jewish children during World War II by establishing a network of 52 shelters under the protection of the Red Cross.

Speakers at government events also condemned several high-profile attacks on elderly citizens, among them Holocaust survivors, that have occurred in recent weeks.

“There is nothing that contradicts Jewish heritage, the values of our country and basic human morality more” than such attacks, Netanyahu said on Sunday.

In anticipation of Holocaust Remembrance Day, Tel Aviv University’s Kantor Center for the Study of Contemporary European Jewry published a new report examining trends in anti- Semitism in 2012. The report indicated a 30 percent increase from 2011 in anti-Semitic attacks and vandalism.

Asked about the report by the Post at Yad Vashem on Sunday, Middle East Quartet envoy and former UK prime minister Tony Blair stated that the way to handle the recent uptick in anti- Semitic attacks in Europe was to “expose” incidents and not sweep them under the rug.

“I know the British government takes it very seriously and we should be putting a lot of pressure on this because you should not tolerate what is intolerable,” Blair said.

“On Yom Hashoah, Canadians stand together to remember the countless innocent people, including nearly six million Jewish men, women and children who suffered,” said Harper, asking that his countrymen “fight against all forms of intolerance” and “never allow” a crime like the Holocaust to be forgotten or repeated.