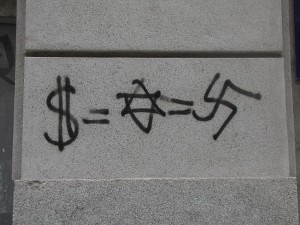 Police in the Boston suburb of Sharon are investigating swastika graffiti that was found on the Victory Assembly of God church last week.

The graffiti may be related to a Jerusalem Day celebration at the church next month. Banners and posters advertising the event, which celebrates Israeli soldiers reuniting Jerusalem during the 1967 Six Day War, was vandalized as well.

“An attack on any place of worship is an assault on the entire community. As a community, we must stand together in solidarity against all forms of hate and bigotry. We are confident that law enforcement is making this investigation a priority and that those responsible will be apprehended and prosecuted,” Robert Trestan, New England regional director of the ADL, said in a statement.

Trestan also said that he found the graffiti particularly upsetting due to its timing in the aftermath of the recent Boston Marathon attack.

“To wake up and find out that some one’s gone after a church-you know, it’s really disheartening. It shows us that we really have a long way to go,” Trestan told the Boston Globe.

A recent study, conducted by Tel Aviv University’s Kantor Center for the Study of Contemporary European Jewry, revealed that global anti-Semitism was up 30 percent in 2012. The largest rise in attacks occurred in economically troubled Europe, specifically in France, Greece, Hungary and Ukraine. But the U.S., Canada and Australia also saw a rise in attacks.