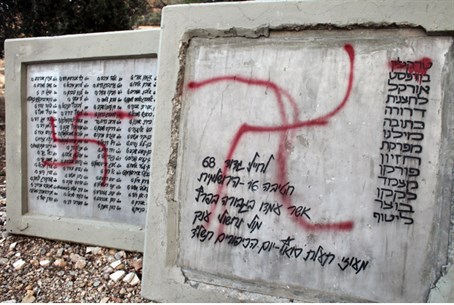 Anti-Semitic incidents in Canada rose by 3.7 percent in 2012, and Holocaust denial rose 77 percent, revealed the Audit of Anti-Semitic Incidents released by the League for Human Rights of B’nai Brith Canada.

“We are particularly concerned about this year’s findings of increased participation in these incidents by perpetrators self-identifying as Muslims who are apparently supportive of Islamist ideologies of hate and violence. But we are encouraged by the many Muslims with whom we work closely, who are prepared to expose antisemitism in their community,” said Frank Dimant, CEO of B’nai Brith Canada.

“The Audit shows an overall decrease in vandalism and violence, but an increase of 10.6% in incidents of harassment,” he said. “Jews were targeted in their homes and at their workplaces, on their way to synagogue or returning from school. The language has moved from ‘F– the Jews’ to ‘Kill the Jews’, with Holocaust Denial cases soaring by 77%, and threats becoming more ugly, explicit and open.”

“The League is also warning that youth culture is being infiltrated by the lyrics of hate, extremism from abroad through online propaganda, and cyberbullying directed to a victim’s smartphone,” Dimant stated.

“The Audit has set out an Action Plan to counter hate, but it will only achieve its goals if all sectors of Canadian society work together whenever and wherever expressions of hate are brought to light,” he added.

According to a new report, published by Tel Aviv University’s Kantor Center for the Study of Contemporary European Jewry, in cooperation with the European Jewish Congress, the year 2012 registered a 30% increase in anti-Semitic acts compared to 2011.