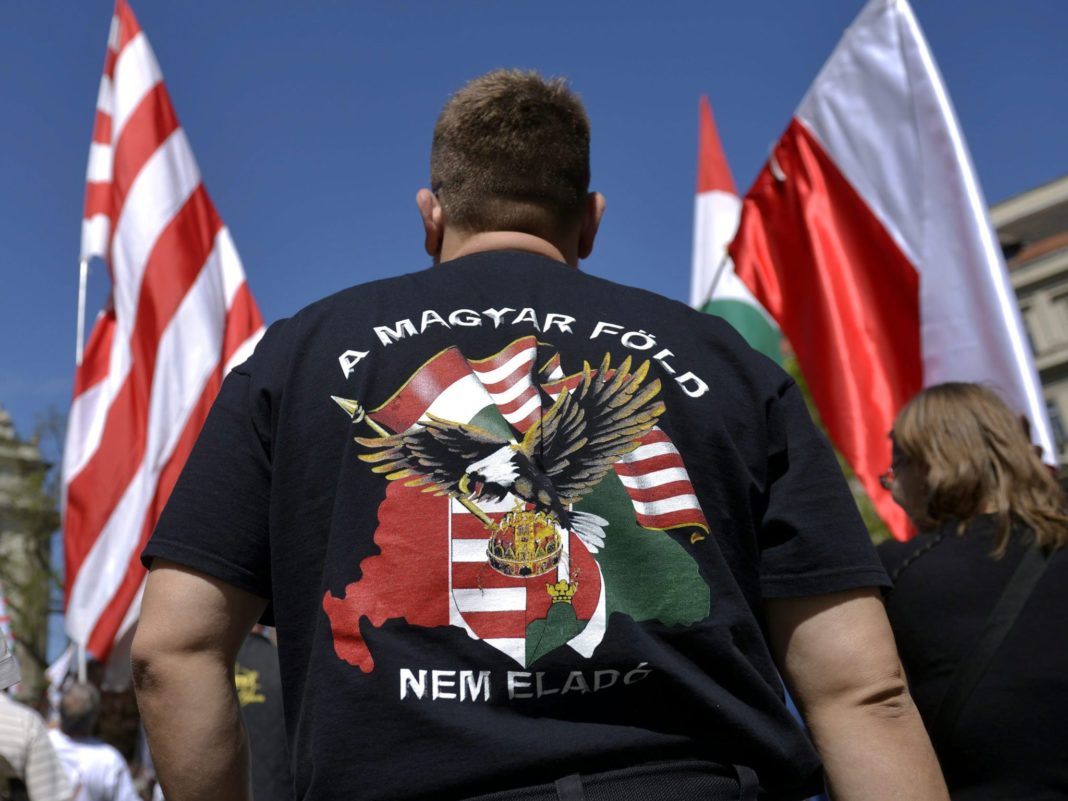 The Hungarian government struggled to counter allegations of institutionalised anti-Semitism on Sunday after the country’s far-right Jobbik party staged a mass rally in the capital Budapest in protest against a meeting of the World Jewish Congress (WJC) in the city.

The WJC usually holds its assembly in Jerusalem. But it chose Budapest for its meeting, which began yesterday, to highlight what it claims is growing anti-Semitism and a rise in support for the far right in Europe, where the economic crisis is fuelling distrust in mainstream political parties.

Hungary has one of the largest Jewish populations in the European Union, but there is growing concern that the government is not doing enough to combat anti-Semitic rhetoric. Ronald S Lauder, the WJC president, complained last month that Hungary was on a “dangerous political path” and that its controversial right-wing nationalist Prime Minister, Viktor Orban, had “lost his political compass” and often told the far right “what they want to hear”.

Last night Mr Orban addressed the issue of growing anti-Semitism in a speech at the opening of the assembly, which runs until Wednesday. He defended the notion of strong national identity as beneficial for mutual co-existence, but said it is a “moral obligation to declare a policy of zero tolerance against anti-Semitism”.

In a gesture which underlined the problems in Hungary, the far-right and openly racist Jobbik party held a mass rally in Budapest on Saturday, less than 24 hours before the WJC was to open its assembly, claiming that the meeting was a “Jewish attempt to buy up Hungary”. The Hungarian Prime Minister had previously tried to ban the rally by the Jobbik party, but was overruled by the courts.

Jobbik is Hungary’s third largest party and won 17 per cent of the vote in the last elections. Several hundred of its supporters, some wearing the black uniform of the party’s banned Hungarian Guard paramilitary wing, gathered in central Budapest, despite attempts by the government to prevent the rally going ahead.

Marton Gyongyosi, an outspoken Jobbik MP, told the rally that Hungary had become “subjugated to Zionism.” Last year, Mr Gyongyosi sparked outrage by demanding that all government officials of Jewish origin be officially listed as they were a potential “national security risk.”

Michael Thaidigsmann, a WJC spokesman, said the rally showed that people could publicly flaunt their anti-Semitic views with impunity.

“We find it a worrying sign that these people express their anti-Semitic and anti-Israeli ideology in such a public way,” he said.

Last month international criticism was heaped on the Hungarian government after it awarded its top journalism prize to a television presenter notorious for spreading Jewish conspiracy theories and describing the country’s Roma minority as “human monkeys”. Ferenc Szaniszlo, a presenter for the pro-government Echo TV channel, was eventually forced to hand back his award.

Concern has also been voiced over the Fidesz government’s apparent “Kulturkampf” which has seen anti-Semitic actors and directors installed in one of Budapest’s leading theatres.

More than half a million Hungarian Jews were killed in the Holocaust. The country was once a thriving centre of Jewish life in Europe, and still has one of the largest Jewish communities in Europe, with between 80,000 and 100,000 Jews helping make up Hungary’s population of 10 million.

It is not only Hungary which is seeing a surge in support for the far right. The WJC said in a statement that it was concerned about the “alarming rise of neo-Nazi political parties and anti-Semitic incidents in several European countries.”

The organisation is expected to express concern about the rise of the far right in Greece, where the once marginal Golden Dawn party now has 18 seats in parliament. Its supporters openly use neo-Nazi symbols and have been accused of attacking migrants, spurred on by the nationalist rhetoric of the party. Europe is also seeing a rise in popularity of nationalist parties, some of which campaign against immigration. Elections in Bulgaria on 12 May are expected to boost the showing of the far right.

Israeli researchers warned last month that there had been an increase in attacks against Jewish communities across Europe, reporting a 30 per cent jump in anti-Semitic violence and vandalism.

The study by Tel Aviv University attributed the rise in part to the economic crisis, with extremist parties taking advantage of people’s frustrations about financial hardships.

“Neo-Nazis have been once again legalised in Europe – they are openly sitting in parliaments,” the president of the European Jewish Congress Moshe Kantor said when the report was released. He urged the European Union to do more to punish member states where anti-Semitic propaganda went unchallenged.

Right-wing movement: The rise of Jobbik

The rise of the right-wing nationalist party Jobbik, also known by its slogan “The Movement For A Better Hungary”, coincided with public discontent over the centre-left coalition’s handling of the floundering economy from 2002 to 2010.

Having registered as a political party in 2003, Jobbik quickly became known for vilifying Jews and the country’s 700,000-strong Roma population, though it has denied that it is racist.

The group gained notoriety after it founded the Hungarian Guard, an unarmed vigilante group reminiscent of World War Two-era far-right groups. It became Hungary’s third-largest political party after the 2010 elections.

Jobbik grabbed international headlines late last year when one of its leaders, Marton Gyongyosi, above, urged the government to draw up lists of Jews who pose a “national security risk”, prompting outcry from Hungarian Jews and Holocaust survivors.

Jobbik presents a problem for Prime Minister Viktor Orban and his ruling Fidesz party﻿. Though Fidesz calls itself a conservative and patriotic party, and has moved to the authoritarian right (most recently cementing its power over public institutions such as the judiciary by replacing a more liberal constitution with one that critics say strengthens the power of the state), it insists that it is not anti-Semitic.

Jobbik could hold the balance of power in the 2014 elections between Fidesz and the fragmented left-wing opposition.