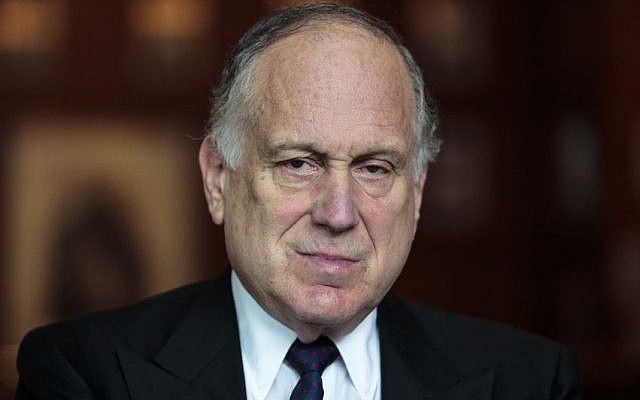 On Monday, in Budapest, Hungary, during its 14th plenary assembly, the World Jewish Congress (WJC) re-elected Ronald S. Lauder, heir to the Cosmetics empire Estée Lauder, as its President for another four-year term.

In 1974, David married the Italian Princess Olimpia Anna Aldobrandini and they currently have four children and live in Normandy.

I wonder if they eat kitnios on Passover.

“I see this as the top assignment for the Jewish people and I am excited to serve as President of the World Jewish Congress for another four years,” said Lauder, who had held the position of President since 2007.

What exactly does President Lauder see as the top assignment for the Jewish people? It’s terrifyingly unique, if you’re a student of history.

One of Lauder’s claims to fame is the Ronald S. Lauder Foundation, which is dedicated to rebuilding Jewish communities in Central and Eastern Europe.

You heard right. This philanthropist actually invests a great deal of money in diverting Jews who could start a thriving life in Israel-back to the killing fields of Europe.

In fact, as I noted earlier this week, on Sunday night Lauder complained that Hungarian Prime Minister Viktor Orbán “did not confront the true nature of the problem: the threat posed by the anti-Semites in general and by the extreme-right Jobbik party in particular,” and therefore, Lauder threatened: “Today, Jews are again wondering whether they will have to leave the country, for similar reasons.”

Lauder’s other claim to fame is his leadership of the movement to introduce term limits in the New York City Council, which were imposed on most NYC elected officials, including the Mayor and City Council, after a citywide referendum in 1993.

It was argued at the time that the term limits would infringe on the democratic rights of a citizen to vote for whomever he or she wishes, and that it also deprived the city of “race memory,” which is crucial if one tries to avoid the foolish mistakes of one’s predecessors.

Lauder spent $4 million on the initial referendum, and then on killing a 1996 council proposal to extend term limits again.

In 1989 Lauder spent a $14 million (in pre-Bloomberg times it was a record) on his NYC mayoral campaign, before losing the Republican nomination to Rudy Giuliani.

Should be interesting to watch whether President Lauder will term-limit himself. His predecessor, Edgar M. Bronfman, ruled from 1979 to 2007.

When he’s not improving democracy in America or restocking the empty streets of Europe with Jews, President Lauder is involved in the Conference of Presidents of Major American Jewish Organizations, the Jewish National Fund, the American Jewish Joint Distribution Committee, the Anti-Defamation League, and my favorite, the Jewish Theological Seminary.

Ronald Lauder and his wife of 30 years Jo Carole Lauder separated in 2006. According to the Internet, Ronald shares his life now with Israeli-born art dealer Daniella Luxembourg, who is believed to have been the reason behind the split.

I’m pretty sure they eat kitnios.