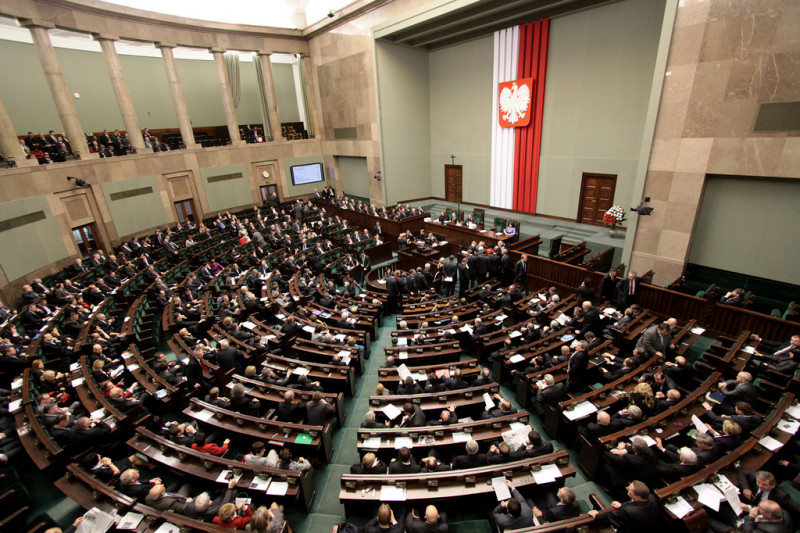 The lower house of the Polish parliament (Sejm) on Friday rejected a government motion to relegalize the religious practice of kosher and halal slaughter.

The ritual slaughter of animals was banned by Poland’s Constitutional Court last December after judges found that it was ‘’incompatible with animal rights legislation.‘’

222 members of the parliament voted against the reintroduction of slaughtering without the animal first being stunned with 178 voting for the motion.

38 members of the ruling Civic Platform of voted against the government-sponsored bill after the party decided that the vote was an issue of conscience.

“Populism, superstition and political interests won out,” said Piotr Kadlcik, President of the Union of Jewish Communities of Poland. “It looks like we’ve made a full circle and are heading back to what happened in Poland and Germany in the 1930s.”

Poland’s chief rabbi Michael Schudrich said the result “was a shock to us” in a joint statement with Piotr Kadlcik.

“It directly infringes on the basic rights of the country’s Jewish and Muslim populations, which will henceforth be forced to either buy more expensive imported meat, or endorse an enforced vegetarianism,” the statement said.

Polish Agriculture Minister Stanislaw Kalemba had argued that the country lost millions of zloty in exports to Israel, Turkey and other countries because of the ban.

In its current form, however, the Polish law is in conflict with the European Convention for the Protection of Animals for Slaughter, which requires the stunning of farm animals but also allows member states to allow exemptions for religious practices.

In a reaction to the vote, Rabbi Pinchas Goldschmidt, President of the Conference of European Rabbis (‘CER) stated : “Jewish communities across Europe will be incredibly distressed that the Polish parliament has voted not to protect the religious freedom of its Jewish and Muslim citizens.”

He added, ”the Conference of European Rabbis is alarmed by the level of disinformation that has characterised the parliamentary debates on this issue and we will be seeking an urgent meeting with the Polish Prime Minister. We will also be exploring what our legal options at EU level might be at this stage. This is very sad day for the Polish Jewish community and indeed for all of European Jewry.”

European Jewish Congress (EJC) President Moshe Kantor condemned the vote wxhich it said ”puts into question the ability to maintain normative Jewish life in the Republic of Poland, and its ability to confirm with the basic norms of freedom of religious expression as a member of the European Union.”

“For a country which saw the annihilation of virtually the totality of its Jewish population, within living memory, to now say that Jewish life is to be constrained that Jews are being prevented from practicing their religion, is shocking in the extreme.”

“We call on the Polish government to immediately bring in new legislation on this issue conforming with the right to freedom of religious expression as enshrined in the Polish constitution and European law. We will be using all political and legal channels to challenge this decision and to maintain solidarity with the Jewish community in Poland in the face of this attack on its most basic rights,” Kantor said.

“For a country still struggling to come to terms with its past treatment of Jews, it is outrageous to strike such a blow to the future of Jews in Poland.

“This vote was a clear violation of religious freedom, supported by the ignorance of some and the bigotry of others,” Foxman added in his statement. “The debate demonstrated acceptance of the false premise that kosher slaughter, which involves a single cut with a razor-sharp knife to minimize pain, is less humane than slaughter with pre-stunning by electrocution, gassing or a bolt shot to the animal’s forehead.”

The Conference of Presidents of Major American Jewish Organizations voiced solidarity with Poland’s Jewish community, and called on the government in the country to reaffirm the 1997 law “that protected schechita (Jewish ritual slaughter).”

The organization experssed “deep chagrin and dismay at the vote of the Sejm, the Polish Parliament, which upheld the ban on Jewish ritual slaughter, necessary for those who observe kosher dietary laws as well as the needs of the Muslim faith …The placing of restrictions and requirements that violate religious law denies the Jewish community its fundamental necessities.”

“We urge Poland’s legislative and judicial authorities to move expeditiously to recognize by law the Jewish community’s right to prepare kosher meat according to Jewish tradition,” David Harris, head of the American Jewish Committee (AJC), said in a statement.

“It would be beyond shocking if a democratic Poland prevented kosher slaughter, which is so integral to Jewish life in the country,” Harris added.

The economic stakes are high for the agricultural country, a big exporter of halal and kosher meat.

Before the ban, Poland exported around 90,000 tons of halal beef a year to Muslim countries, mostly Turkey, and 4,000 tons of kosher meat to Israel.

Some 20 slaughterhouses in Poland specialize in the production of halal and kosher meat in an industry that employs 6,000 people according to the agriculture ministry.

“We have yielded our markets to the French, the Dutch and the Germans,” said a farmer demonstrating in front of parliament in favor of the law.

“We won’t be able to make money, support our families. It will be foreign firms who benefit -bravo!”