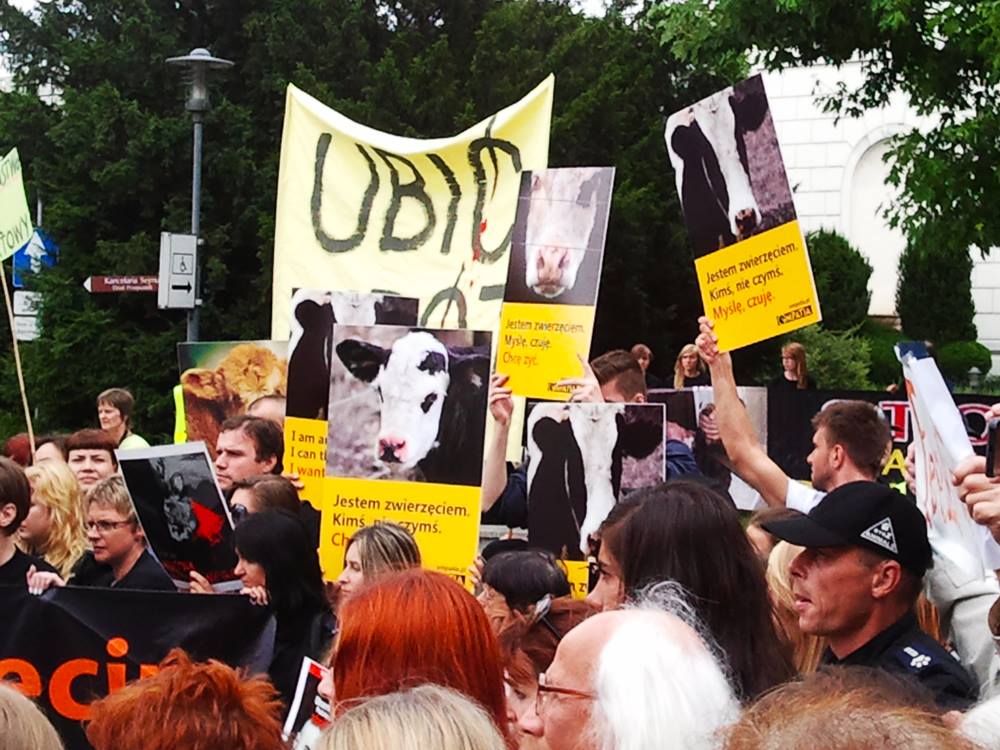 European Jewish groups were set to meet for urgently-convened talks in Brussels Wednesday following the controversial failure of a government-sponsored bill designed to protect Jewish religious slaughter (Shechita) rights in Poland. Last week, the Polish lower house voted by 222 to 178 to defeat the proposed legislation which sought to safeguard the ritual practice for Europe’s largest pre-WWII Jewish community.

Attending the discussions aiming to examine how to protect the endangered practice for the rest of European Jewry will be representatives from the European Jewish Congress (EJC), the Conference of European Rabbis (CER) and senior members of Poland’s remaining Jewish community, including its President Piotr Kadlcil. The country’s chief rabbi Michael Shudrich will participate in talks via video link.

“The issue of shechitah is now at the forefront of our responsibilities as representatives of European Jewish communities,” said EJC Secretary General Serge Cwajgenbaum, on the timing of the hastily-convened talks. “We will galvanise and utilise all legal means to fight this ban in Poland because the future of shechitah in Europe will have an immediate and direct bearing on the future of a thriving and unmolested Jewish community in Europe and by extension a tolerant and broad-minded Europe,” he added.

Contending the decision, which equally has implications for Poland’s larger Muslim population, “constitutes a complete disregard for Polish history” in light of its once-vibrant Jewish heritage, Kadlcik insisted that threats to the “basic right to religious expression are an issue not only for Polish Jews but for all Europe’s Jewish and minority religious communities”.

The Polish precedent has attracted widespread concern from across Europe’s Jewish communities with British umbrella group the Board of Deputies od British Jews’ Vice President Jonathan Arkush describing it as “especially regrettable that this should happen in Poland, once home to the greatest Jewish community in the world and the scene, also, of its greatest tragedy”.

“It runs contrary to much of the positive work undertaken by successive Polish governments to build positive relations with Jewish communities around the world,” he added. The bill’s defeat, he insisted, was the product of “ignorance” of the premium which Jewish religious slaughter places of animal welfare, as he called on the Polish authorities “to take the necessary action to reverse this inexplicable and unjust ban”.

The President of the French Jewish umbrella organisation the CRIF confirmed he had sent a letter of appeal to the Polish ambassador in France following Friday’s ruling, “noting that the prohibition of this religious practice pre-empted the departure of Polish Jews”.

The Polish government sought to instigate legislation to protect the practice of Shechita following last November’s ruling by the capital’s Constitutional Court that the Jewish ritual slaughter of animals was “illegal”. The Warsaw court’s ruling said the government had acted unconstitutionally when it exempted Jews and Muslims from stunning animals before slaughtering them according to their traditions.

Last year, Polish animal rights organisations staged extensive protests against the practice, leading the government to respond by insisting an outright ban would run contrary to the Polish Constitution, which guarantees freedom of religion. The debate formed part of a wider European dialogue, after the Dutch Jewish community signed an agreement with the government to preserve Shechita after the Dutch parliament in 2011 passed a law banning ritual slaughter. The Estonian government also committed to changing its laws on Shechita to reflect “new scientific knowledge” last year, although it stopped short of advocating an outright ban.

European regulation called on all 28 EU member states to update their existing domestic laws on ritual slaughter by January of this year and, as such, many governments have referred to the DialRel report for scientific guidance in formulating their new policies. The controversial report claims that shechita causes higher levels of pain in the animal than other methods of slaughter that involve stunning. By contrast, post-stunning only moderately reduces the level of pain, and pre-stunning produces “low” levels of suffering.

Poland once housed Europe’s largest pre-war Jewish community, with 90% of its former 3.3 million-strong population being wiped out by the end of WWII in 1945. Official figures estimate its current community to stand at 7,500.