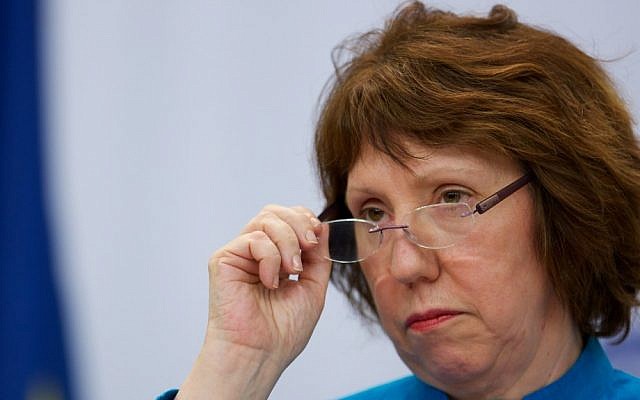 A group of former top European officials on Monday called on the European Union’s foreign policy chief not to ease or delay the implementation of guidelines that would bar the organization from funding Israeli institutions located beyond the Green Line.

“We urge you to uphold this commitment by supporting the guidelines and their full application by EU institutions, notably in regard to the ongoing negotiations about Israel’s participation in Horizon 2020,” the letter stated, according to Haaretz. “Their strict application serves to reiterate that the EU does not recognize and will not support settlements and other illegal facts on the ground…. It is these facts on the ground, not the guidelines, which threaten to make a negotiated solution to the Israeli-Palestinian conflict impossible.”

The authors of the letter warned that a possible deferment of the guidelines, which are set to take effect in January 2014, could harm the ongoing peace process. “If the EU were to delay or suspend the guidelines, or not fully apply them to the agreement with Israel on Horizon 2020 [a scientific cooperation program], this could further undermine the Palestinians’ trust in the negotiation process and their ability to continue the talks,” the letter stated. “In other words, delaying or suspending the guidelines is likely to undermine negotiations, not help them.”

Published in July, the EU guidelines mandate a denial of European funding to, and cooperation with, Israeli institutions based or operating over the Green Line, and a requirement that all future agreements between Israel and the EU include a clause in which Israel accepts the position that none of the territory over the Green Line belongs to Israel.

Jerusalem fiercely rejected the directive, saying it refuses to sign any further agreements with the EU that include such clauses. For instance, Israel threatened to cancel its participation in Horizon 2020, a multi-billion-dollar scientific cooperation program under EU auspices. Among other things, Jerusalem feared that the guidelines would entail a boycott of any Israeli institution that operates beyond the Green Line even if it is based in Israel proper, such as the Hebrew University or Hadassah Hospital, a fear EU officials say is unjustified.

EU officials came to Israel last week to discuss the exact formulation of the so-called territorial clause. While European policymakers are adamant that the guidelines will not be changed, they have signaled willingness to implement them in ways that are acceptable to Israel. “During the last meeting, spirits were good on both sides,” an EU official told The Times of Israel. While the guidelines will not be changed and will take effect as planned, Israeli and European diplomats are working on “creative solutions” to find wording that would make the territorial clause easier to swallow for Jerusalem, he said.

Foreign Ministry spokesperson Paul Hirschson said Monday that while he’s aware that the actual wording of the guidelines will not be altered, the Europeans are flexible regarding its interpretation. “We’re hopeful that, within the bounds of what’s possible, we’ll be able to find common ground that both sides can accept,” he told The Times of Israel.

The European Jewish Congress harshly criticized the former EU officials for sending the letter, calling it a “danger to peace as it hands one side a political victory without having to compromise and deepens the Palestinian feeling that they can gain more outside of negotiations than in them.”

“The significance and the timing of these new guidelines, on the eve of the return to negotiations, harms the trust between the parties and a potentially successful outcome,” he added.

Last Wednesday, a group of nearly 500 European academics also sent a letter to Ashton about the guidelines, urging her “not to weaken or abandon them at the first sign that Israel, or the United States, takes objection to them.”