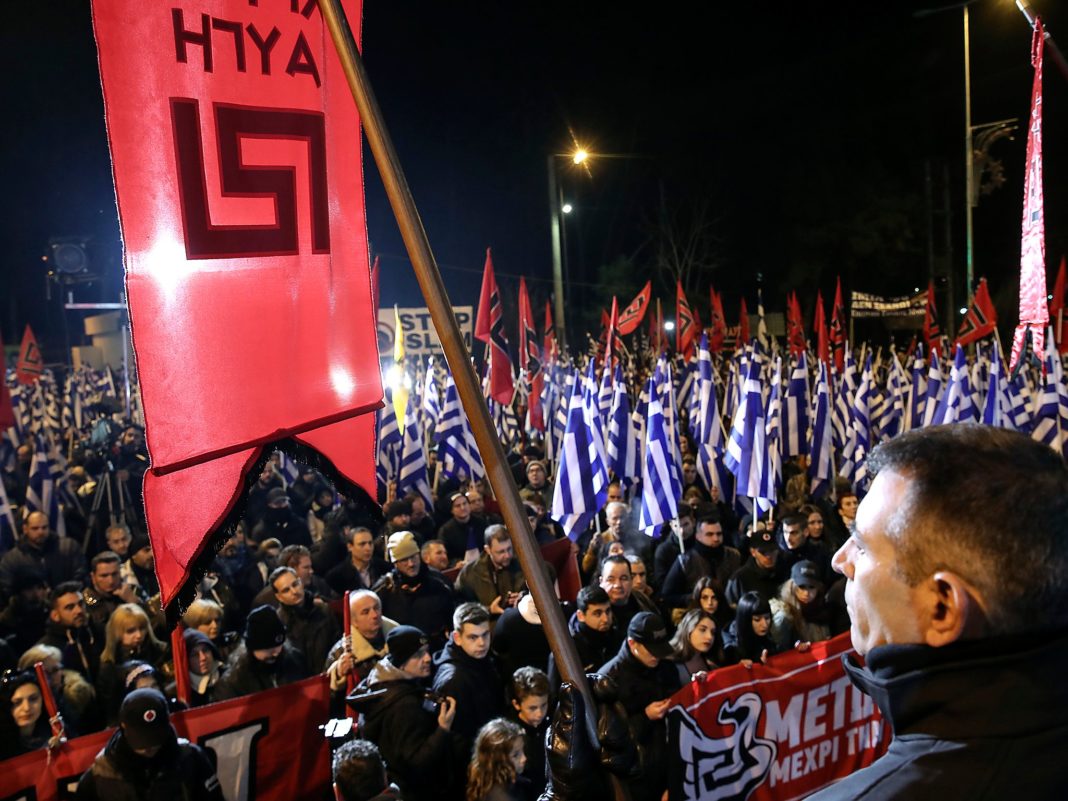 Community leader says Jews always said that the party was a Nazi one and that the government has to be aware.

Jewish leaders came out strongly in favor of Greece’s Saturday crackdown by antiterror forces on the leadership of the neo-Nazi Golden Dawn party, which resulted in the incarceration of several senior party members, including leader Nikolaos Mihaloliakos.

The arrests, which are the most significant crackdown on a political party in Greece since the fall of its military dictatorship in 1974, are the biggest setback to Golden Dawn since it entered parliament on an anti-immigrant agenda last year.

Ranked as Greece’s thirdmost popular party, Golden Dawn is under investigation for the murder of rapper Pavlos Fissas, who bled to death after being stabbed twice by a party sympathizer last week. The party has denied any links to the killing of Fissas.

Saturday’s raids saw the arrests of Mihaloliakos, party spokesman Ilias Kasidiaris, three other lawmakers and 13 party members, while the party’s No. 2, Christos Pappas, turned himself in to police in Athens on Sunday morning.

The detainees were taken under high security to the prosecutors’ office, and charged officially on evidence linking the party with a string of attacks, including the stabbing of the rapper on September 17 and the killing of an immigrant earlier this year, court officials said.

The party is noted for its activities against immigrants.

Calling Golden Dawn a criminal organization, Public Order Minister Nikos Dendias stated that “the investigation will not end here,” implying that a wider crackdown may be in the works.

After Fissas’s murder, Dendias proposed legislation that would cut off state funding to parties if their leader or more than a tenth of their lawmakers are charged with a felony carrying a 10-year jail term.

Until Saturday’s crackdown, the government of Prime Minister Antonis Samaras has so far resisted calls to ban the party, which has been called “anti- Semitic” by senior members of his administration.

A ban of the party could potentially be counterproductive, Greek Deputy Minister of Justice, Transparency and Human Rights Konstantinos Karagounis told The Jerusalem Post earlier this year.

The WJC has alleged that parties such as Jobbik in Hungary and Golden Dawn in Greece, both of which have become significant political forces in their countries’ respective parliaments, “openly glorify Hitler’s Nazi regime; publicly utilize Nazi terminology in respect of Jews and other minorities; and espouse the toxic combination of extreme anti-Semitic discourse, aggressive national chauvinism, and anti-capitalist and anti-socialist rhetoric that hallmarked the thinking and deeds of the Nazi Party.”

Jewish organizations redoubled their calls for a ban of Golden Dawn after Fissas’s murder.

Greece’s leaders need to take action against those who create a climate of fear, and who pose a threat to many of their fellow citizens,” Lauder said last week.

Golden Dawn’s popularity has taken a significant hit since the murder.

Dendias said that outlawing Golden Dawn would require a constitutional change, a process that could take years, though he said that “the time may have come to debate that possibility.”

“As Jews, we are very happy” about the arrests, Benjamin Albalas, head of the Central Board of Jewish Communities in Greece (KIS), told The Jerusalem Post on Sunday. “This group, I don’t call them a party, is a neo-Nazi group and I think that the government will go until the end.”

David Saltiel, former president of the KIS, told the Post that he didn’t see a blanket ban of the party in the offing, but did encourage the removal of the party’s leadership.

Golden Dawn is “not a political party, but a gang,” he said, echoing his successor. “The Jewish community always said that the Golden Dawn was a Nazi party and that the government has to be aware.”

“What is happening is an incredible thing. The government is showing resolve in eliminating this neo-Nazi party and it’s the first time that the Greek government [is] showing this kind of determination in reestablishing order in Greek society,” said Sabby Mionis, a Greek- Israeli financier who has been under fire by Golden Dawn for refusing to testify before a Greek parliament that he said contained Holocaust deniers.

“Either they will ban Golden Dawn, or dismantle it – one way or the other – but Golden Dawn as we knew it is over for good,” he said.

Jewish groups outside of Greece have expressed their hope that the government will continue applying pressure on Golden Dawn.

“We congratulate Prime Minister Antonis Samaras on the crackdown of neo-Nazis and hope that the Greek leadership will make this a central part of the European Union Presidency which they will assume in January 2014,” European Jewish Congress President Moshe Kantor said in a statement.

“While we are mindful of the risks involved with taking on a political party that serves in the Parliament, there are limits, which in the case of Golden Dawn, were passed a long time ago,” said American Jewish Committee Executive Director David Harris.

“Laudably, the government of Prime Minister Samaras has recognized the absolutely necessity to say ‘enough is enough,’ and to take meaningful actions to stop the madness of Golden Dawn. A party cannot be allowed to cynically use the freedom that democracy offers to subvert that very freedom.”

Gourary told the Post: “The IJC will continue to work closely with the Central Board of Jewish Communities in Greece and our friends in the Greek Parliament in the ongoing fight against