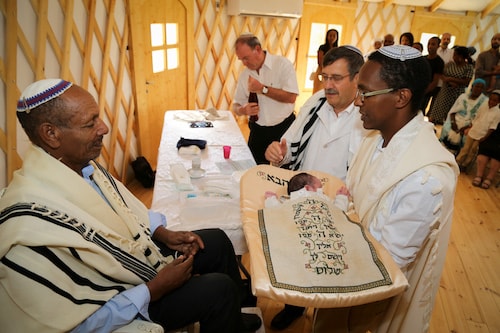 The European Jewish Congress (EJC) hosted the first Brit Milah Working Group in Brussels today to discuss and coordinate the political, legal, medical and ethical aspects of the current attacks on religious circumcision in Europe.

Earlier in the month, the Parliamentary Association of the Council of Europe passed a resolution attacking religious circumcision and in September leading officials in Sweden and Norway called for an end to Brit Milah on infants. This is in addition to last year’s furor when in May a local German court ruled that religious circumcision was illegal, only to be overruled by the German Parliament who voted to ensure its continuance. One of the arguments used against those who seek to proscribe Brit Milah is that it is a right enshrined in the European Charter of Fundamental Rights.

Dr. Moshe Kantor, President of the EJC, stressed the importance of the meeting. “For too long, European Jewry have been reactive to sporadic attacks on religious practices,” Kantor said. “However, the enemies of Jewish tradition are becoming more united and coordinated and so we must create a unified, coordinated and long-term strategic response to these attacks.”

The participants of the working group decided to launch a pro-active campaign to educate parliamentarians and the general public in Europe about Brit Milah, to push for standardization of the practice of Brit Milah among all European communities and to initiate European-wide training of mohelim to meet the highest medical and hygiene standards.

Additional decisions made by the working group include, the training of Jewish communities to combat campaigns against Jewish religious rights, the engagement of experts in all the relevant medical and legal fields to defend Brit Milah and the placing of the issue at the forefront of the demands of Jewish voters and communities in the run-up to the elections for the European Parliament next spring. Also discussed was the formation of legal and medical advisory groups.

Attending the meeting were members of organizations involved in combating the attempted proscription of Brit Milah, including the European Jewish Congress, Union of Mohalim in Europe, Milah UK, the Conference of European Rabbis.

Also attending the meeting were internationally-renowned experts on the medical and legal experts aspects of Brit Milah.

“We are today facing a concerted and clearly coordinated campaign across Europe against Jewish religious rights. This campaign brings together strange coalitions linking the far-Right, animal rights groups and some so-called progressive lobbyists. We cannot allow ourselves to be unprepared for this and we need to mobilise all of our communities to be pro-active and united to defend our Jewish identity and practice in Europe,” said Philip Carmel, EJC Advisor on European Policy.

“The practice of Brit Milah unites all Jews of whatever personal religious observance. It is incumbent on all Jews to protect it together as we have done for 3,000 years.” Carmel added.