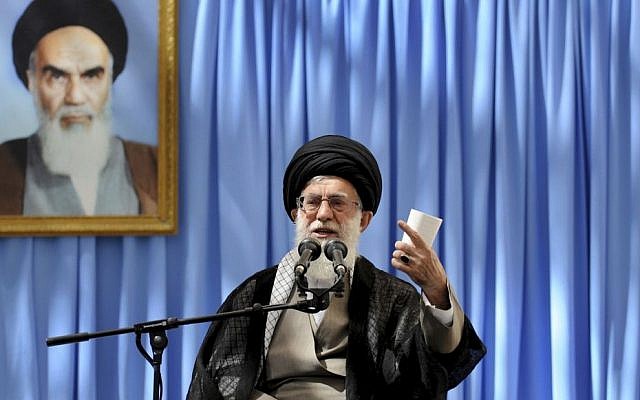 In an address to an assembly of tens of thousands of Basij militiamen, Khamenei declared that Israel was doomed to fail and characterized the “Zionist regime” as the “sinister, unclean rabid dog of the region.” He also said Israelis “cannot be called human beings.” Footage of the event showed the crowd shouting “Death to America” and “Death to Israel.”

At a meeting Thursday morning with Jewish leaders in Moscow, Prime Minister Benjamin Netanyahu said today’s Iran reminded him “of the dark regimes of the past that plotted against us first and then against all of humanity,” and thus had to prevented from attaining nuclear weapons. “The real Iran is what the leader of Iran, Khamenei, said yesterday,” said Netanyahu. “He called Jews ‘rabid dogs’ and said that they were not human. The public responded to him with calls of ‘Death to America! Death to Israel!’ Doesn’t this sound familiar to you? This is the real Iran! We are not confused,” said Netanyahu.

Khamenei delivered the speech hours before the resumption of talks in Geneva between the P5+1 countries and Iran on thwarting Iran’s rogue nuclear program.

To Israel’s dismay, the speech did not prompt an immediate condemnation by the United States, the officials said Thursday.

US Secretary of State John Kerry did speak out against Khameini’s address, yet stopped short of issuing a forthright condemnation.

“Obviously we disagree with it profoundly,” he told the Senate Foreign Relations Committee. “It’s inflammatory, it’s unnecessary, and I think at this moment when we are trying to negotiate what can and can’t be achieved, the last thing we need is names back and forth,” Kerry said, according to ABC News. “Obviously we don’t believe that anything is served with, you know, names that challenge everybody’s sense of propriety and justice and rectitude. We’ve been through this before, as we’ve heard prior, very disturbing assertions regarding the Holocaust.”

On Wednesday, in response to a reporter’s question, State Department spokesperson Jen Psaki called the comments “not helpful.” She said, in full: “I think at this point in the negotiations, things are certainly sensitive, and certainly we are focused on moving all sides towards a successful outcome. Certainly, you’re all familiar with how we feel about Israel – they’re our close ally, a close friend, we are very focused on their security – one of the reasons that we’re so committed to these talks. Obviously, comments like these [by Khamenei] are not helpful, but we still believe that both sides are negotiating in good faith. We still believe that we’re closer than we were going into Geneva, and we still feel that we have an opportunity to move forward on a diplomatic path with the Iranians, and I would feel pretty confident in saying that the other P5+1 members feel the same way.”

By contrast, a French government spokesperson said soon after Khamenei had spoken that President Francois Hollande considered the comments to be “unacceptable” and that they would complicate the Geneva talks.

World leaders should take notice of the regime’s true, genocidal face, as reflected by Khamenei’s remarks, and beware of premature concessions in the current nuclear negotiations, the Israeli top officials urged.

“Precisely during the course of those negotiations [in Geneva], Khamenei spoke out in the most extreme, inflammatory and disgraceful manner against the State of Israel,” Bar noted. “Khamenei’s remarks are clearly reminiscent of similarly brutal, racist statements made by racist, dictatorial regimes in the past, including that of the Nazis. ‘The Israelis cannot be called human beings because they are animals… A rabid dog… Israel is doomed to destruction.’ Exactly the same declarations were made against Jews, blacks, and others by the Nazis in the 1930s.”

And yet, protested Bar, “I was disappointed to hear no strong condemnation nor any official censure whatsoever by the United States, the European countries, nor the EU itself. These comments from Khamenei, in the middle of talks with the world’s powers, allow the world to understand with what kind of regime we are dealing, and with whose leaders the world has been trying to reach a reasonable compromise in recent days. But reasonable compromises are made with reasonable people, not with inciting, racist, bloodthirsty leaders who intend to annihilate a democratic state – a UN member – and who are not ashamed to say it out loud.”

Bar, a prominent advocate of intensified peace efforts with the Palestinians who recently led a solidarity visit of MKs to meet Palestinian Authority President Mahmoud Abbas in Ramallah, said he was demanding that recipients of his letter “issue condemnations in the strongest possible terms” and “stand up against the dark, racist statements and incitement” from Iran. “It is not easy to promote the idea of ​​peace among the Israeli public,” he noted, “when Israelis feel attacked and vulnerable, and when they do not have the verbal and moral support of our closest allies, countries that share with us the same moral values of peace, democracy and freedom.”

Foreign Minister Avigdor Liberman, for his part, called on the six world powers currently negotiating with Iran – the US, Britain, France, China, Russia and Germany – to “pay attention” to Khamenei’s words. They show “the true face of the Iranian regime, not the false representation that [Iranian President Hassan] Rouhani and his people are showing the world,” he wrote on his Facebook profile.

Khamenei, as someone “who uses the words of Goebbels and Hitler when talking about the Jews,” has shown that Iran “certainly does not aim to acquire nuclear power for peaceful purposes,” the foreign minister wrote.

“Only when the aggressive and belligerent Iranian rhetoric has stopped and the active pursuit of weapons of mass destruction has been reversed should there be any talk of concessions, not the reverse,” Kantor said.

“Khamenei is still the puppeteer, and while the puppet may have changed, the goals haven’t,” he added. “His hate speech should serve as a clarion call for the world powers to push back the Iranian pursuit of weapons of mass destruction further from reality.”