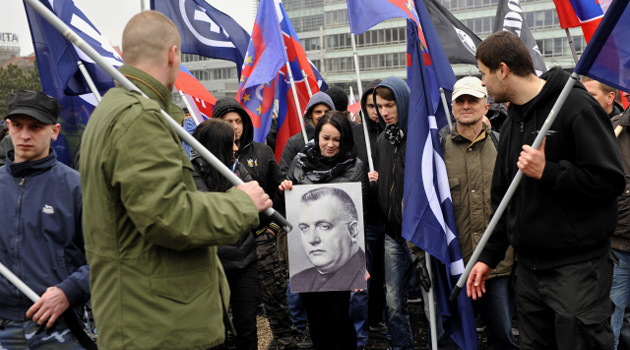 A right-wing extremist has been elected regional governor of Banska Bystrica in central Slovakia.

Marian Kotleba won 55.5% of the vote in the run-off against Vladimir Manka from the Smer-Social Democrat party.

Kotleba is a former leader of a banned far-right organization who now leads the ultra-nationalist Our Slovakia party.

In response to Kotleba’s victory, the head of the European Jewish Congress said European officials must act to reverse the momentum of neo-Nazi political parties.

“The neo-Nazis are gaining many political victories and are using the democratic system against democrats,” EJC President Moshe Kantor said. “Democracy has to fight back and European officials should immediately create a plan of action, including the proscription of neo-Nazi political parties, to deal with this phenomenon before it is too late.

“We hope the Greek model of suspending state funding for the Golden Dawn party and the revocation of parliamentary immunity for its members will be enacted elsewhere in Europe and form the basis of the opposition.”

The Slovak Spectator newspaper said Kotleba “frequently organized and participated in anti-Roma demonstrations or marches commemorating the Nazi-allied wartime Slovak state and its president Jozef Tiso. He has been detained and charged repeatedly for crimes, including racial defamation.”

The German DPA news agency described Kotleba as being known for his “agitation against the Roma minority as well as for appearing in uniforms modeled upon fascist styles.”