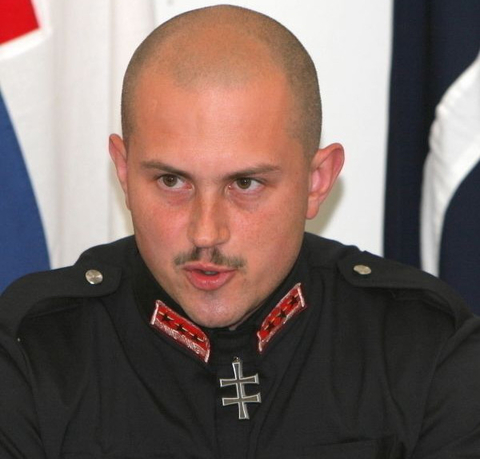 Human rights activists and Jewish groups sounded the alarm Monday over the surprise election of a Slovak neo-Nazi as regional governor, AFP reports.

Marian Kotleba’s weekend victory appears to be due in part to his anti-Roma rhetoric. The move comes as several European nationalist parties, including France’s anti-immigrant National Front and Hungary’s far-right Jobbik, plan to join forces ahead of next year’s European Parliament elections.

“The neo-Nazis are gaining many political victories and are using the democratic system against democrats. Democracy has to fight back,” EJC president Moshe Kantor declared.

President Ivan Gasparovic said he was “surprised by the result” and called it “a warning for politicians not to be oblivious and indifferent to problems that people have been facing for a long time”.

“Kotleba’s victory will boost the courage of other extremists,” Irena Bihariova, head of the Bratislava-based non-profit organization People Against Racism, told AFP. “There is also a danger that mainstream politicians will try to beat Kotleba at his own game and that overall anti-Roma sentiment in the country will grow.”

“Everybody lost in these elections. Kotleba’s success is a result of hatred, helplessness and frustration with politicians,” Slovakia’s biggest broadsheet daily SME said on its front page.

Kotleba has a range of controversial views to his name: he considers NATO a terrorist organization, believes Slovakia should dump the euro, has been arrested for hate speech against the large and impoverished Roma minority, and has in the past denied the Holocaust.

The 36-year-old has also spoken warmly about former Slovak president Jozef Tiso, who agreed to send tens of thousands of Jews to Nazi death camps during World War II. He recently traded in his Nazi-style uniform for a suit and used the fallout from the economic slowdown to lash out at the Roma community.

The eurozone member is grappling with 14 percent unemployment among a population of 5.4 million people. It is also expected to post just 0.8 percent growth this year, down from two percent in 2012.

Smer leader Prime Minister Robert Fico had said he had “no doubts” Manka would win the second round and now blames the media and centre-right parties for Kotleba’s success.

Political analyst Marian Lesko told AFP that Kotleba could use the governor’s chair as a “starting point to build support on a national level and run in the 2016 general election”.

Around half of Slovakia’s 400,000 Roma are fully integrated into society. The rest live in some 650 shanty towns without electricity, sewage or running water found mainly in the country’s east.