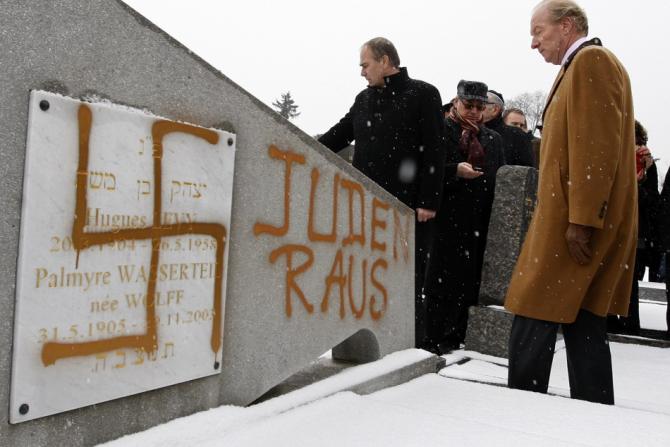 Almost seven decades after the fall of the Nazi Third Reich, anti-Semitism remains an intractable problem in Europe, prompting more Jews to seek to immigrate to Israel (“aliyah” in Hebrew). Nowhere is this phenomenon more pronounced than in France. The Jewish Telegraphic Agency (JTA) reported that in the first nine months of 2013, the number of French Jews departing for Israel soared by 49 percent (from 1,469 to 2,185) compared to the same period in 2012. In all of 2012, 1,907 Jews arrived in Israel from France, JTA said, citing figures from the Jewish Agency for Israel, a nonprofit Jewish organization. Under the Law of Return, all Jews residing outside Israel have the legal right to immigrate and settle in Israel and be granted Israeli nationality.

In September alone, 148 French Jewish immigrants arrived in Israel, a big jump from the 90 who came in September 2012. “September numbers are usually predictive of the total numbers for the year,” said Howard Flower, director of aliyah for the International Christian Embassy Jerusalem, a partner of the Jewish Agency. In contrast, the proportion of Jews moving to Israel from North America fell by 8 percent over that nine-month time frame (from 2,737 to 2,524). On the whole, some 13,905 people made aliyah from around the world through the first nine months of this year, a 1 percent increase over the comparable 2012 period.

But the number of Jewish immigrants from Western Europe has surged by 26 percent over the prior year, likely reflecting growing worries about anti-Semitism on the continent. Earlier this month, the European Union’s Fundamental Rights Agency released a survey of Jews from nine European states in which one-third said they did “not feel safe” living as Jews and considered immigrating to Israel. In three such countries – France, Belgium and Hungary – such fears were particularly pronounced. In total, more than three- quarters (76 percent) of respondents said they detected rising anti-Semitism across Europe. An extraordinary 90 percent said they have encountered countrymen who did not consider Jews to be their fellow nationals.

The Local newspaper cited a report from February 2013 that claimed anti-Semitic attacks in France (both physical and verbal) have skyrocketed 82 percent in the country last year. Perhaps the most shocking incident of anti-Jewish violence of that year occurred in March, when an al-Qaeda-inspired Muslim gunman named Mohammed Merah killed seven people, including four Jews, in and around the southern France city of Toulouse.

Douglas Yates, assistant professor of political science at the American University of Paris and professor at the American Graduate School in Paris, told International Business Times that there is a disturbing overall climate of increased xenophobia across France. “Historically it expressed itself as anti-Semitism,” he said. “Being Jewish in France remains a problem, despite many laws, and numerous political speeches. Being Muslim is also a problem. Given the rise of the National Front and the fear of a silent racist majority, it is small wonder that some Jews have opted for Zionism.”

JTA also suggested that some European Jews (in France and elsewhere) might also have considered moving to Israel due to the economic crisis that still grips the continent. Indeed, David Parsons, media director at the International Christian Embassy, told The Local that some Jews are going to Israel over finances and faith. “Since the economic crisis [of 2008] a lot of French Jews have made aliyah because Israel has recovered more quickly from the economic downturn and unemployment rates there are much lower amongst the younger generation,” he said. “I asked some people making aliyah their reasons for moving to Israel and they seemed very upbeat. They didn’t cite anti-Semitism. They just felt it was time to come to the homeland. They identified with the Jewish people and the Jewish state. Some had relatives here. Their reasons were linked to faith and community more than anything else.”

However, anti-Semitism in Europe cannot be discounted. Referring to a EU report that indicated many European Jews try to hide their identity, Moshe Kantor, president of the European Jewish Congress, lamented: “[That] Jews are no longer able to express their faith because they are afraid should be a turning point for Europe,” according to Israel Today. Earlier this month, France’s President François Hollande visited Israel and was warmly received in the Knesset (parliament), where he vowed that he would “not rest in fighting anti-Semitism.”

Despite the warm enbrace between Hollande and Israeli Prime Minister Benjamin Netanyahu, The Jewish Daily Forward took a very bleak view of the future of French Jews. “French Jewry has lost faith in France and is looking to move,” Pinchas Landau, an independent economic consultant based in Jerusalem, wrote. “Indeed, many young French Jews have already relocated to London and New York, where newly formed French Jewish expat communities are growing rapidly. But if and when a large-scale outflow occurs, its destination will certainly be Israel.” But Landau did not ignore France’s fragile economy and high joblessness as contributory factors. “Economic prospects for young people in France are now so bleak that, perhaps for the first time in modern French history, the idea of mass emigration has gone mainstream,” he noted.

Landau also stated that threats to France’s Jews come not only from the extreme right-wing nationalists (as exemplified by the National Front party) but also from the country’s huge Muslim population – at an estimated 6 million people. France has Europe’s largest Islamic community, which dwarfs its (still sizable) Jewish community by more than 10 times.

“French Jews may be receiving the brunt of these threats at the moment, but they are pan-European in scope,” Landau warned. “How many will leave, how soon and under what circumstances — voluntarily or otherwise — will depend on the intensity of the socioeconomic crisis and its political fallout.” Still it must be kept in mind that although the rate of Jews leaving France has surged, in absolute terms, the numbers emigrating remain small (as France has some half-million Jews).

“Most French Jews are French first, as they have always insisted,” Yates commented. “Nationalism remains a powerful force, and the protection of religious minorities through the doctrine of ‘laicité’ [absence of religious involvement in government] provides them with ample protection from even an anti-Semitic political majority.” In addition, the National Front has shifted its focus away from Jews and toward Arab Muslims. Yates even suggests that the presence of radical elements of France’s Muslim population may also have created some sympathy for the country’s Jews.