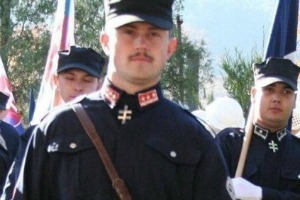 Marian Kotleba, a far-right politician notorious for his anti-Roma rhetoric and appearances in a Nazi-style uniform, has won the local election in the Banská Bystrica region of Slovakia by 55.5%, sending a shockwave to the political class ahead of the European elections.

Kotleba has a range of controversial views: he considers NATO a terrorist organisation; he has been arrested for hate speech against the country’s large and impoverished Roma minority; and he has in the past denied the Holocaust.

He is also a trenchant Eurosceptic, believing that Slovakia should dump the euro currency.

The 36-year-old has also spoken warmly about former President Jozef Tiso, who agreed to send tens of thousands of Jews to Nazi death camps during World War II. He recently traded in his Nazi-style uniform for a suit and used the fallout from the economic slowdown to lash out at the Roma community.

Kotleba won in the election for governor of the Banská Bystrica region in a run-off, beating the ruling party centre-left Smer party’s candidate, incumbent Vladimír Maňka, leaving most of the country frozen in disbelief, according to the Slovak Spectator.

The Slovak Democratic and Christian Union’s (SDKÚ) regional leaders, namely its regional head Ľudovít Kaník, who came third in the first round of the governor election and thus did not move on to the run-off, did not recommend that the public vote for Maňka.

“Voters of the right surely voted for Kotleba in order to see Smer lose,” Fico said as quoted by the Sme daily, adding that for the right even “Antichrist, Satan, Hitler, Mussolini” would be better than Maňka.

Observers smashed the reaction of the prime minister as demagogic, saying that all politicians carried their part of responsibility for the development.

Slovak President Ivan Gašparovič said he was “surprised by the result” and called it “a warning for politicians not to be oblivious and indifferent to problems that people have been facing for a long time”.

“The neo-Nazis are gaining many political victories and are using the democratic system against democrats. Democracy has to fight back,” EJC President Moshe Kantor declared.