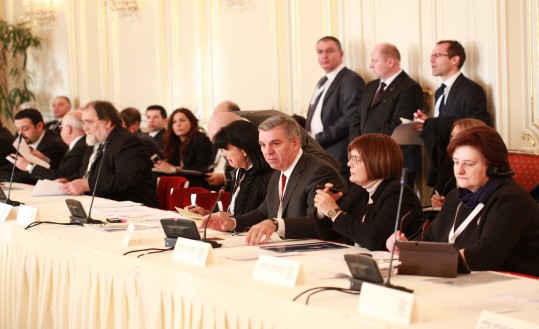 Deputies’ Chamber Speaker Valeriu Zgonea has started an official visit to the United Kingdom, at the invitation of the European Jewish Congress (EJC). According to a release the Deputies’ Chamber quoted by Agerpres, the Romanian delegation also includes Deputy Aurel Vainer, Chairman of the Federation of Jewish Communities of Romania, and Deputy Angel Tilvar, Chairman of the Education, Science, Youth and Sports Committee of the Deputies’ Chamber. On this occasion, the Deputies’ Chamber Speaker will meet European Jewish Congress President Moshe Kantor and other members of this forum’s leadership. Moreover, Zgonea will attend on Friday a meeting with leaders of the Board of Deputies of British Jews, the main representative body of British Jews. The Romanian delegation will also visit ‘Bevis Marks’ Synagogue, one of the oldest worship places of the UK, the release also shows. In his agenda, the Deputies’ Chamber Speaker also has scheduled meetings with British MPs of UK’s House of Communes Home Affairs Committee and with representatives of the Labour Party leadership.