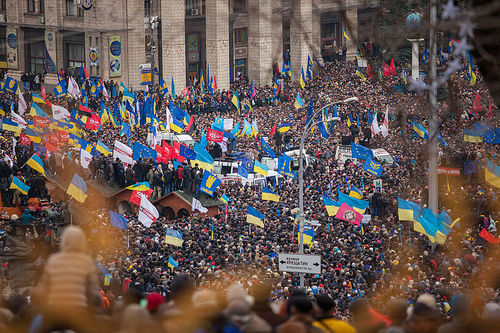 The Jewish community in Ukraine has been alarmed by two violent anti-Semitic incidents that occurred in Kiev within a week.

On January. 11, two men attacked a 26-year-old Israeli teacher of Hebrew after he left a synagogue at the end of Shabbat. He did not suffer serious wounds.

One week later, a 28-year-old yeshiva student from Russia, Dov Ber Glickman, was also attacked after he left a synagogue.

The men hit the student with their fists and their legs. According to the Euro-Asian Jewish Congress General Council (EAJC), the men’s combat boots may have been outfitted with blades. The young man dragged himself to a nearby ritual bath, where he was discovered and taken to a hospital.

Sam Kliger, the American Jewish Committee’s (AJC) director of Russian Jewish community affairs, believes the incidents could be a “sinister sign indicating that some are trying to use anti-Semitism in political confrontation in Ukraine.”

When the Maidan protests began in November 2013 against Ukrainian President Viktor Yanukovych’s decision to freeze plans to join a free trade agreement with the European Union, there was little indication of anti-Semitism among protesters, despite the fact that ultra-nationalist Ukrainian political opposition party Svaboda was participating in the protests.

Yet historically, “in this part of the world, a political confrontation sooner or later starts to exploit the ‘Jewish question’ and to play the Jewish card,” Kliger said.

The National Conference Supporting Jews in Russia, Ukraine, the Baltic States & Eurasia (NCSJ) also issued a statement condemning both attacks. NCSJ Executive Director Mark Levin said he was not surprised by the incidents. “Anti-Semitism unfortunately remains an issue in Ukraine. It ebbs and flows,” he said.

In a statement, the Israeli embassy in Kiev urged the Ukrainian government ‘’to thoroughly investigate the incidents, find the assailants and bring them to justice.”

‘’Israel highly appraises the Ukrainian government’s fight against anti-Semitism and hopes that it will strongly condemn and prevent such attacks,’’ it said.

In Brussels, the European Jewish Congress (EJP) called on Ukrainian Authorities ‘’to ensure the safety of the Jewish Community.’’

‘’Firstly, there must be an increased security presence surrounding Jewish institutions and communities and secondly that they send a clear message that hate crimes and anti-Semitic attacks will not be tolerated by taking measures against all known neo-Nazi groups, including Svoboda,’’ it said.

“Unfortunately, the latest attack is merely part of a wave of attacks against Jews in Ukraine,” Dr. Moshe Kantor, President of the European Jewish Congress, said.

“We know from statistics that the majority of attacks go unreported so their number is much greater. Just as we have seen elsewhere in Europe, the Ukrainian Government has to take on neo-Nazi and anti-Semitic elements in their country, even if they sit in the parliament,’’ he added.