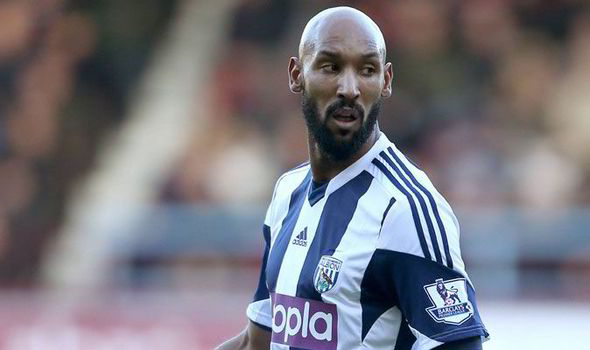 Anelka was charged by the FA yesterday and faces a minimum five-game ban for the ‘quenelle’ gesture regarded as anti-Semetic.

But Lukaku, a friend of Anelka’s who embraced him before Everton’s game at West Brom on Monday night, said he should not be banned and “we don’t have to make such a big deal about it”.

Jewish groups are enraged by what Anelka did and have given their backing to the FA’s tough action.

European Jewish Congress president Dr Moshe Kantor said: “We are happy the FA has correctly concluded that Anelka’s quenelle salute falls under the guidelines of what constitutes a racist and offensive gesture.

“We hope that the FA will give Anelka the strongest punishment possible and in line with similar punishments for other football players who made racist and offensive gestures or comments.

“Anti-Semitism is a growing phenomenon in Europe and in particular surrounding football stadiums and hate against Jews, as with any other type of hate and intolerance, should be stamped out without demonstrating leniency to the perpetrators.”

Lukaku, on loan to Everton from Chelsea, said he still looks up to Anelka.

“He was my idol since I was a kid and he still is. He shouldn’t be banned for that.

“It was just a gesture to support a stand-up comedian in France so we don’t have to make such a big deal of it.

“He’s an adult and I hope he doesn’t get suspended because he’s a player that people want to see on the pitch.”

Lukaku’s support for Anelka came after the game in a Sky Sports interview which was used on Everton’s official website.

After Anelka was charged by the FA, Lukaku’s interview was taken off the site. Everton’s director of communications Alan Myers said: “This was Romelu’s opinion but it is not the opinion of the club.

“As soon as we saw the comments, we removed them from our site to minimise any offence that may have been caused.”

Lukaku is an ambassador for football’s anti-discrimination group Kick It Out and was on loan to West Brom last season. It is thought Everton officials will speak to him but he will not be disciplined.

Anelka has until 6pm tomorrow to appeal but, if he does and fails, his suspension is likely to be increased to eight or 10 games.

That would put Anelka’s future at West Brom in severe doubt and could mean his contract until the end of the season being terminated.

Club sponsors Zoopla have already said they will not discuss a renewal of their deal because of the player’s actions. It is understood that Anelka, 34, will not receive legal help from West Brom and will have to fund an appeal himself, unlike the Luis Suarez and John Terry racism cases where QCs were provided.

Anelka is the first player held to account under new guidelines to combat racial discrimination.

He made the sign, described as an inverted Nazi salute, after scoring against West Ham on December 28. He promised not to do it again but did not apologise, saying it was a gesture of support for his friend French comedian Dieudonne M’bala M’bala.

Anelka has a 34-page document to go through detailing the allegations after the FA charged him with making a gesture that was “abusive and/or indecent and/or insulting and/or improper”, adding that it was “an aggravated breach in that it included a reference to ethnic origin and/or race and/or religion or belief”.

West Brom said: “The player is now considering his options. Under FA rules, Anelka remains available for first-team selection until the disciplinary process has reached its conclusion. Following this, the club will conclude its own internal inquiry.”

Team-mate Liam Ridgewell said: “It’s a celebration he did for his mate and that was it really.”