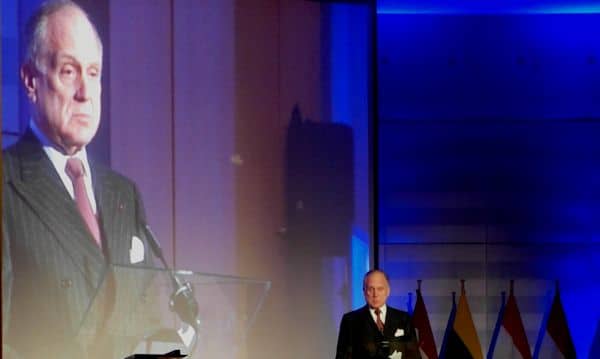 World Jewish Congress President Ronald S. Lauder today said the lessons from the Holocaust were an obligation to overcome indifference and speak out against a growing trend of anti-Semitism and racism in Europe and the world.

Speaking at the European Parliament in Brussels at a ceremony marking International Holocaust Remembrance Day, Lauder said: “World Holocaust Day is meaningless if we only pay attention to the past and ignore the same problems that threaten us today.

“In 2014, the threats facing the world today are not just against the Jews. Because of our past, we Jews cannot be silent when Christian churches are burned by Islamists in Egypt and throughout the Middle East and when half a million Christians are driven out of war-torn Syria because of their religion,” Lauder said.

The WJC president also said it was alarming to see the rise of far-right anti-Semitic groups in Europe, e.g. in Hungary and Greece. “We must be willing to see what is right in front of us and we must have the courage to deal with it,” Lauder declared at the event which was organized by the European Jewish Congress (EJC) and the president of the European Parliament, Martin Schulz.

EJC President Moshe Kantor made reference to recent incidents in Europe. “The Holocaust is not a matter for satire. Anti-Semitism is not an opinion, it is a crime. Today, we are witness to the absolute democratization of anti-Semitism. A simple inversed Nazi salute performed with impunity at Auschwitz, at the Berlin Holocaust memorial, at a synagogue and even in front of the Jewish school in Toulouse where Jewish children and a teacher were murdered in broad daylight by a French terrorist.

“A symbol invented by a so-called comedian which allows young people out for a drink, soldiers having a laugh and even a footballer scoring a goal, to have their own unique opportunity for Jew hatred.” Kantor added.

Praise for Greek clampdown on neo-Nazis

In his speech to the 300 dignitaries and guests, including Jewish leaders from across Europe and Israel, Greek Prime Minister Antonis Samaras, whose country holds the rotating presidency of the EU, spoke about the importance of remembrance and the importance of the lessons learnt from history. “Today, one hundred years after the First World War, when dozens of millions of Europeans lost their lives in battle, and seventy years after the atrocities of the genocide and the Holocaust, we have turned those horrific nightmares into a bright vision; and this vision into a reality: United Europe, our Europe, which has become the world champion of respect for freedom, democratic rights and human dignity,” Samaras said.

Kantor praised Samaras and the Greek government for clamping down on Golden Dawn party, saying: “The Greek government’s fight against the neo-Nazi Golden Dawn party is an example of the defense of democracy which we hope to see replicated across the continent wherever those engrossed in hate, racism and xenophobia seek to utilize the democratic system to further their dark aims.”

He added: “Holding a memorial ceremony cannot undo the atrocities that happened to so many families: but it can serve as a warning, it can serve as a tribute and it can serve as a lesson. The Shoah was the worst tragedy of humankind. Yet, the dangers and demons are regrettably still present in our societies. This evening we remember the victims, we pay tribute to the Righteous among the Nations and we say: ‘Never again!'”

International Holocaust Remembrance Day is a memorial day for the victims of the Holocaust, the genocide that resulted in the annihilation of 6 million Jews and millions of others by the Nazi regime and its collaborators. The largest Nazi death camp, Auschwitz-Birkenau, where 1.1 million Jews were murdered, was liberated on 27 January 1945.

Greek PM Antonis SamarasGreek PM Antonis SamarasThe United Nations and countries around the world also held memorial ceremonies commemorating the victims of the Holocaust on Monday. In a video reflection on his trip last year to the Auschwitz death camp, UN Secretary General Ban Ki-moon stated that he would “never forget my visit. I saw the horrific remnants of the machinery of genocide… The United Nations was founded to prevent any such horrors from happening ever again. We will continue to shine a light on these unspeakable crimes so that they may never be repeated,” he stated.

At a ceremony at the Auschwitz memorial, some 20 survivors walked through the gate that bares the infamous ‘Arbeit macht frei’ sign and laid a wreath at the former camp’s Executions Wall, where the inmates, mainly Polish resistance members, were shot to death.

Half of the Knesset in Auschwitz for memorial

Around 60 members of the Knesset, half of the entire Israeli legislature, joined the survivors for the observances that included visits to the red brick Auschwitz barracks which house a collection of the victims’ belongings and hair, and a list of the names of some 4.2 million Jews who perished in the Holocaust. In a special ceremony at Birkenau, they also heard from one of the survivors, Noah Klieger, about the Death March when some 15,000 died after Nazis fleeing the advancing Soviet army in January 1945 forced inmates still able to walk to march west in freezing weather.

Israeli coalition leader, Yariv Levin, speaking on behalf of the lawmakers, said that people in Israel should rely on themselves and aim to build a safe world.