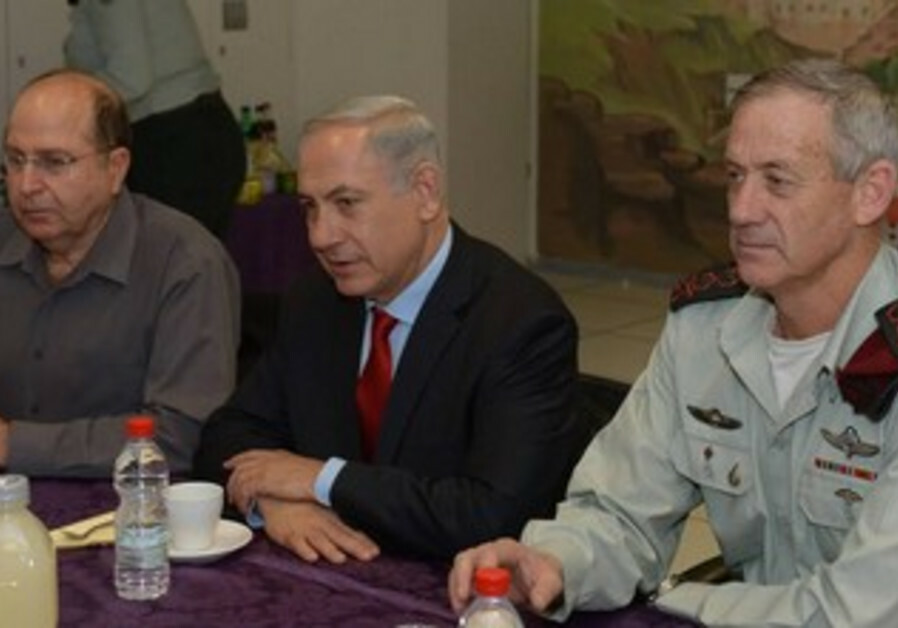 Prime Minister Binyamin Netanyahu railed against what he termed the world’s silence over Iran’s stated desire to destroy the State of Israel on Monday, in remarks on International Holocaust Remembrance Day.

Even now the world doesn’t cry out against a state calling for Israel’s destruction, and instead warmly greets Iran’s leader, he said, adding that this is happening even though there is wide agreement that more should have been done to prevent the Holocaust.

“Facing a country openly calling for the destruction of the state of the Jews, everyone is clearing their throats and smiling in front of the smiles,” Netanyahu said.

The world’s attitude toward Israel is out of all proportion to the issues on the agenda, Netanyahu added, and is a continuation of thousands of years of anti-Semitism.

The prime minister noted Canadian Prime Minister Stephen Harper’s speech in the Knesset last week, saying it was one of the most important speeches ever heard in the Israeli parliament. Harper, during his speech, said the singling out of Israel “was extreme and out of any reasonable proportion.”

The questioning of Israel’s basic right to exist, Netanyahu said, “undermines the foundations of Western civilization, which is supposed to fight for our rights and for the rights of others. We have to struggle against efforts to deny the legitimacy of the Jewish state, and to demand our rights here,” he said.

The UN and countries around the world held memorial ceremonies commemorating the victims of the Holocaust on Monday. In a video reflection on his trip last year to the Auschwitz death camp, UN Secretary- General Ban Ki-moon stated he would “never forget my visit. I saw the horrific remnants of the machinery of genocide…

The UNs was founded to prevent any such horrors from happening ever again.”

“We will continue to shine a light on these unspeakable crimes so that they may never be repeated,” he stated.

“On Holocaust Remembrance Day, we must keep alive the memory of this tragedy. It is an occasion to remind us all of the need to continue fighting prejudice and racism in our own time. We must remain vigilant against the dangers of hate speech, and redouble our commitment to prevent any form of intolerance. The respect of human rights and diversity lies at the heart of what the European Union stands for,” Ashton stated.

Jews in Europe have become increasingly uncomfortable, with almost a third mulling emigration as a response to heightened anti-Jewish sentiment, according to a recent study by the EU Agency for Fundamental Rights (FRA) cited by Jerusalem and Diaspora Affairs Minister Naftali Bennett during his annual report on anti-Semitism at Sunday’s cabinet meeting.

The rise of far-Right political parties alleged by Jewish organizations to maintain Neo-Nazi ideologies in Greece, Hungary and Ukraine have been a matter of concern, Bennett stated. He also referred to recent attempts to ban circumcision and ritual slaughter on the continent.

Large medical associations in Sweden and Denmark recommended banning non-medical circumcision of boys last week, and the Parliamentary Assembly of the Council of Europe called for a discourse on the ethical implications and legal status of the practice in a resolution last year. Ritual slaughter is currently prohibited by law in Poland.

“Seventy years after the liberation of Auschwitz, who could have imagined representatives of parties with Nazi insignia, race hatred for Jews and a proclivity for violence marching down the streets of our capitals and into our parliamentary chambers – including this one,” European Jewish Congress president Dr. Moshe Kantor said at a ceremony marking the 69th anniversary of the liberation of Auschwitz at the European Parliament.

“World Holocaust Day is meaningless if we only pay attention to the past and ignore the same problems that threaten us today,” World Jewish Congress president Ronald Lauder said. “We must be willing to see what is right in front of us, and we must have the courage to deal with it.”

Greek President Antonis Samaras praised his government’s handling of the far Right at the memorial, citing a widespread crackdown against the Golden Dawn party.

“The Greek government’s fight against the neo-Nazi Golden Dawn party is an example of the defense of democracy, which we hope to see replicated across the continent wherever those engrossed in hate, racism and xenophobia seek to utilize the democratic system to further their dark aims,” Samaras averred.

“As we commemorate the destruction of the Jewish communities of Greece and Hungary just 70 years ago, how liberated really are the citizens of Europe, when we witness today the eruption of political parties with Nazi insignia on the streets of Athens and Budapest, while we genuinely fear the very real prospect of the strengthening of far-Right and neo-Nazi parties in the coming European elections?” he asked.

While countries around the world held Holocaust memorials, two violent attacks against Jews and mounting violence between anti-government demonstrators and police in Kiev led the local Jewish community to cancel its annual Holocaust memorial, the JTA reported.

Some 400 Jews were expected to attend the event at the Brodsky Synagogue on Monday, according to Eduard Dolinsky, executive director of the Ukrainian Jewish Committee.

But as the death toll in the clashes reached at least four on Wednesday, organizers decided to cancel.

On Sunday, immediately prior to International Holocaust Remembrance Day, several thousand demonstrators in Paris chanted “Jews go home,” and “Jews, France is not your country” while performing the quenelle, a gesture reminiscent of the Hitler salute invented by the anti-Semitic French comedian Dieudonne M’bala M’bala.

Yad Vashem held events in locations around the world, including such far-flung locations as Ghana, Singapore and Paris. Several of Yad Vashem’s events also focused on practical issues of Holocaust education.

Dorot Hahemshech, an organization representing the descendants of Holocaust survivors in Israel, called for “both the Israeli government and other democracies to renew and intensify the efforts to apprehend unprosecuted Nazi war criminals and collaborators, in order to bring them to justice while it is still possible,” on Monday.

“There are hundreds of Nazi war criminals still alive all over the world who are responsible for the murder of Jews and/or their deportation to death camps, and therefore the efforts to bring them to justice must continue,” organization chairman Shmuel Sorek stated.