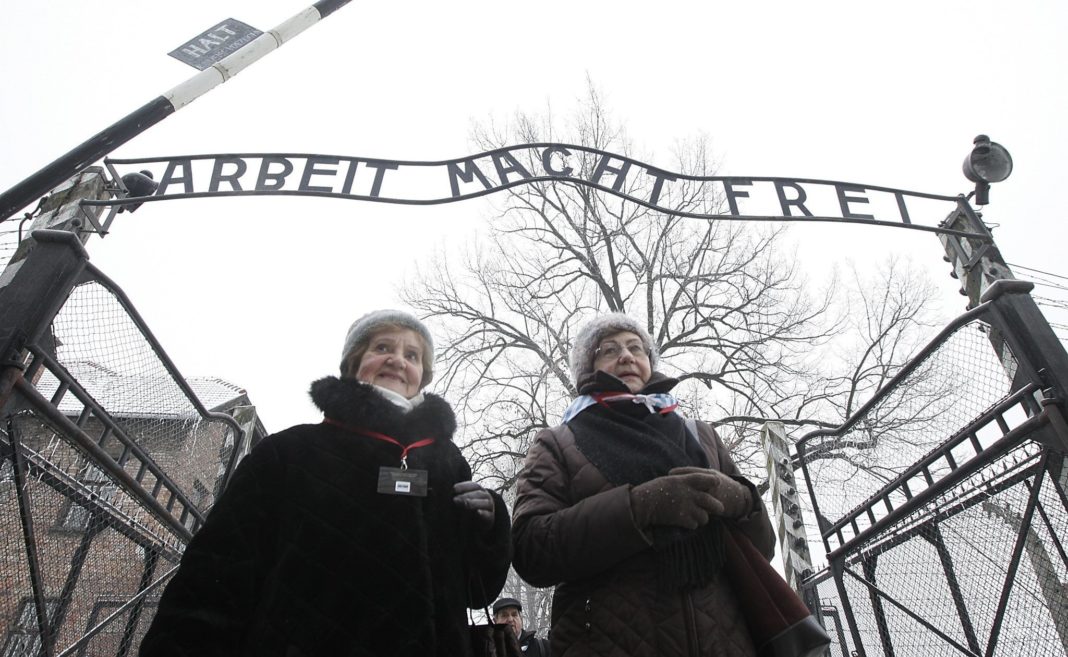 Auschwitz survivors and Israeli officials commemorated the 69th liberation anniversary Monday with a ceremony at the memorial for the infamous Nazi death camp, The Associated Press reported.

The ceremony at the Auschwitz-Birkenau memorial took place on International Holocaust Remembrance Day, established by the United Nations in memory of some 6 million Holocaust victims, and some 1.5 million victims of Auschwitz, who were mostly Jews.

Some 20 survivors walked through the gate that bares the infamous “Arbeit Macht Frei” (Work Makes You Free) sign and laid a wreath at the former camp’s Executions Wall, where the inmates, mainly Polish resistance members, were shot to death.

Around 60 members of the Knesset, or half of the Israeli legislature, joined the survivors for the observances that included visits to the red brick Auschwitz barracks which house a collection of the victims’ belongings and hair, and a list of the names of some 4.2 million Jews who perished in the Holocaust.

Israeli coalition leader, Yariv Levin, speaking on behalf of Knesset lawmakers, said that people in Israel should rely on themselves and aim to build a safe world.

Speaking at the European parliament ceremony in Brussels, European Jewish Congress President, Moshe Kantor, rejected free speech arguments over what he called the worldwide spread of anti-Semitism. Anti-Semitism is “not an opinion – it’s a crime,” he said.

“Today we are witnessing the absolute democratization of anti-Semitism,” Kantor said. It is “a symbol invented by a so-called comedian that allows young people out for a drink, soldiers having a laugh and even a footballer scoring a goal, to have their own unique opportunity for Jew hatred.”

Napolitano said Monday during Holocaust Memorial Day commemorations that recent insults made against the Jewish community are “comparable only to the repugnant material in those packages.”

Italian police also detained two men, ages 33 and 47, on suspicion of instigating racial hatred for anti-Semitic graffiti, including denial of the Holocaust, near the main judicial offices in Rome. Authorities say the men belong to different far-right groups. No arrests have been announced for the delivery of the pig head’s.

Also Monday, the Holocaust Survivors’ Foundation USA called on Germany’s Allianz to pay aging survivors benefits that their families bought before they died in the Holocaust.

“It is shameful that today, Holocaust survivors are not allowed to even bring a lawsuit in a U.S. court to recover these unpaid policies,” they said. Legislation that would allow survivors in the U.S. to sue European insurance companies has lingered in Congress for years.