A Glimmer Of Hope Amid The Darkness 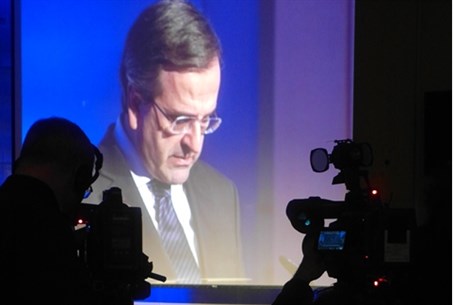 The event, which thanks to EJC lobbying has become a permanent feature of the EU Parliament’s calendar, was attended by European diplomats and Jewish leaders and community activists from across the continent.

The event itself was impressive; organizers did not stop at commemorating the tragic events of the past, but deftly wove past and present to communicate the need to utilize those lessons and memories to inform the Jewish, and indeed the international community’s attitude towards very real problems facing contemporary European society.

Between the short but incredibly moving documentary offering firsthand testimony of the destruction of Hungarian and Greek Jewry, and the impassioned speech by Greek Prime Minister Antonis Samaras – who spoke of the obligation to not just remember the Shoah, but to make sure that “nothing even remotely like it can happen again” – the subtext was inescapable: “Never Again” is not a guarantee, it is a statement of intent. And if the determination to make sure that “it” does not happen again – in any form – does not hold firm, then those two words are simply meaningless.

During the film, one Hungarian survivor noted that many people always ask her generation “why didn’t you leave before it happened?” Her answer: “It” didn’t happen all at once – it was incremental, allowing people to dismiss each new anti-Jewish law or sign as just another meshigas that would blow over soon anyway. The implications for present times, where Europe is seeing another, albeit somewhat different, incremental rise in anti-Semitism, was chilling.

The focus on two countries – Greece and Hungary – whose Jewish communities were decimated under Nazi rule, and which now face a frighteningly resurgent far-right in the form of Golden Dawn and Jobbik, respectively, was clearly no coincidence either.

In his address to the hundreds of attendants, EJC President Dr. Moshe Kantor warned against complacency in thinking that the dangers of anti-Semitism are a thing of the past.

“Next year we will gather to mark 70 years of the liberation of Auschwitz, but are we truly liberated?” he asked.

“Are Jews liberated today in European society where they feel secure and safe as they identify themselves as Jews on the streets of Europe?” he continued, noting a recent study by the EU’s Fundamental Rights Agency which recorded “that the majority of European Jews feel unsafe in today’s Europe”, and that more than 75% feel that anti-Semitism has increased over the last half a decade.

“And are European citizens truly liberated from the hate and intolerance that led to Auschwitz?” he challenged. “As we commemorate the destruction of the Jewish communities of Greece and Hungary just 70 years ago, how liberated really are the citizens of Europe when we witness today the eruption of Nazi political parties on the streets of Athens and Budapest while we genuinely fear the very real prospect of the strengthening of ultra-Right parties in the coming European elections?”

Kantor also noted the less direct, but no less significant, contributing factors to the rise in anti-Semitism over the past decade, such as the so-called “quenelle” or inverted Nazi-salute popularized by anti-Semitic comedian Dieudonne.

But perhaps the most powerful and impressive aspect of the event was the people themselves.

I personally had the privilege of speaking with Jews from countries as diverse as Greece, Romania, France, Hungary, the Czech Republic, Andalusia and Germany, to name but a few. Prior to the event, in many cases these were the first Jews from those countries I had ever come into personal contact with. The experience was enlightening.

There will always be debates as to what future, if any, there is for European Jewry. Just over half a year ago my wife and I made a personal decision that our future certainly did not lie there, and many young European Jews are doing the same.

But one thing is certainly for sure regardless: the fact that in 2014, communities which by all accounts should have ceased to exist nearly 70 years ago are still producing dynamic leaders and activists, who take pride in their Jewishness and play an active and lively part in Jewish life, is a testament to the eternal, unbreakable spirit of the Jewish people. And in bringing them together, at least a glimmer of hope can pierce European Jewry’s dark past and uncertain future.