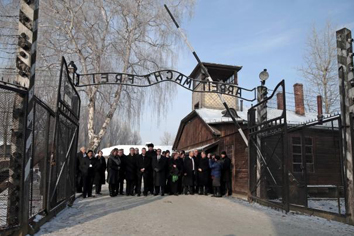 The event has become a permanent part of the EU Parliament’s calendar in recent years and was attended by European diplomats and Jewish leaders as well as community activists from not only the continent but from around the world.

The event organizers did not commemorate the tragic events of the past, but they “deftly wove past and present to communicate the need to utilize those lessons and memories to inform the Jewish, and indeed the international community’s attitude towards very real problems facing contemporary European society,” Israel national News reported.

Between the short but incredibly moving documentary offering firsthand testimony of the destruction of Hungarian and Greek Jewry, and the impassioned speech by Greek Prime Minister Antonis Samaras – who spoke of the obligation to not just remember the Shoah, but to make sure that “nothing even remotely like it can happen again” – the subtext was inescapable: “Never Again” does not just serve as a guarantee but also as a statement of intent.

“And if the determination to make sure that “it” does not happen again – in any form – does not hold firm, then those two words are simply meaningless,” Israel National News stated in its coverage of the event.

EJC President Dr. Moshe Kantor warned against complacency in thinking that the dangers of anti-Semitism are a thing of the past when he addressed the hundreds in attendance of the memorial event.

“Next year we will gather to mark 70 years of the liberation of Auschwitz, but are we truly liberated?” he asked.

“Are Jews liberated today in European society where they feel secure and safe as they identify themselves as Jews on the streets of Europe?” he continued, noting a recent study by the EU’s Fundamental Rights Agency which recorded “that the majority of European Jews feel unsafe in today’s Europe”, and that more than 75% feel that anti-Semitism has increased over the last half a decade.

“And are European citizens truly liberated from the hate and intolerance that led to Auschwitz?” he challenged. “As we commemorate the destruction of the Jewish communities of Greece and Hungary just 70 years ago, how liberated really are the citizens of Europe when we witness today the eruption of Nazi political parties on the streets of Athens and Budapest while we genuinely fear the very real prospect of the strengthening of ultra-Right parties in the coming European elections?”

Kantor also noted the less direct, but no less significant, contributing factors to the rise in anti-Semitism over the past decade, such as the so-called “quenelle” or inverted Nazi-salute popularized by anti-Semitic comedian Dieudonne.

Other attendees included the president of the World Jewish Congress, Ronald S. Lauder, who said: “World Holocaust Day is meaningless if we only pay attention to the past and ignore the same problems that threaten us today.

“In 2014, the threats facing the world today are not just against the Jews. Because of our past, we Jews cannot be silent when Christian churches are burned by Islamists in Egypt and throughout the Middle East and when half a million Christians are driven out of war-torn Syria because of their religion,” the WJC president said when addressing the crowd.

He also called it alarming to see the rise of far-right, anti-Semitic groups in Europe, e.g. in Hungary and Greece. “We must be willing to see what is right in front of us and we must have the courage to deal with it,” Lauder declared at the event, which was not just jointly organized by the EJC but also the president of the European Parliament, Martin Schulz.

In his speech to the 500 dignitaries and guests, including many Jewish community leaders from across Europe and Israel, Greek Prime Minister Antonis Samaras, whose country currently holds the rotating presidency of the EU, spoke about the importance of remembrance and the importance of the lessons learnt from history.

“Today, one hundred years after the First World War, when dozens of millions of Europeans lost their lives in battle, and seventy years after the atrocities of the genocide and the Holocaust, we have turned those horrific nightmares into a bright vision; and this vision into a reality: United Europe, our Europe, which has become the world champion of respect for freedom, democratic rights and human dignity,” Samaras said.

Kantor praised Samaras and the Greek government for clamping down on Golden Dawn party, saying: “The Greek government’s fight against the neo-Nazi Golden Dawn party is an example of the defense of democracy which we hope to see replicated across the continent wherever those engrossed in hate, racism and xenophobia seek to utilize the democratic system to further their dark aims.”

He added: “Holding a memorial ceremony cannot undo the atrocities that happened to so many families: but it can serve as a warning, it can serve as a tribute and it can serve as a lesson. The Shoah was the worst tragedy of humankind. Yet, the dangers and demons are regrettably still present in our societies. This evening we remember the victims, we pay tribute to the Righteous Among the Nations and we say: ‘Never again!'”

The White House recognized the significance of the day in its own right by hosting a special screening of the documentary film “There Was Once.” The screening was hosted by Special Envoy to Monitor and Combat Anti-Semitism Ira Forman. Introductory remarks were given by Acting Principal Deputy Assistant Secretary of State for Democracy, Human Rights and Labor Ambassador Mike Kozak.