Anti-Semitic Comedian ‘A Victim Of His Own Fascism’ 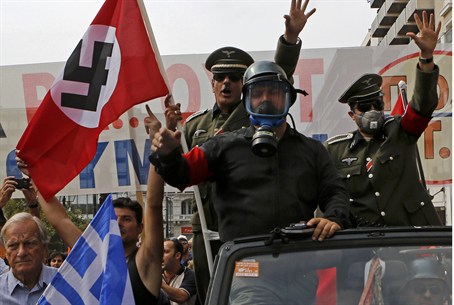 Anti-Semitic comic Dieudonne M’Bala M’Bala and his followers may consider himself a victim of “the system”, but he is in fact simply a victim “of his own fascist convictions”, according to a prominent European Jewish leader.

Secretary General of the European Jewish Congress, Serge Cwajgenbaum, told Arutz Sheva that French authorities eventually were forced to crack down on Dieudonne – after long being accused of ineffectiveness against rising anti-Semitism – as his actions became “an embarrassment to France”. Dieudonne’s performances, which often feature Holocaust denial, anti-Jewish stereotypes and other forms of anti-Semitism, have been banned by authorities, and the hatemonger now faces criminal charges connected to past breaches of race-hate laws.

Cwajgenbaum, himself a French Jew, was speaking at the European Parliament during the International Holocaust Remembrance Day commemorations there earlier this week. He explained to Arutz Sheva how the initiative – the brainchild of the European Jewish Congress – gained traction and is now a permanent feature of the EU’s calendar.

Regarding the controversial “quenelle” gesture – an inverted Nazi salute popularized by Dieudonne – Cwajgenbaum said he had no doubt it was anti-Semitic. Dieudonne had initially linked it to anti-Semitism himself, despite presently denying that was his intention, and the symbol is a way for extremists to identify with each other and share anti-Semitic sentiments, he said.

Participants at the EU ceremony in Brussels joined French and other European Jewish leaders in voicing concern over an alarming rise in anti-Semitism in France, as well as the rise of fascism in Greece and Hungary. Speaking at the event, Greek Prime Minister Antonis Samaras assured the audience that his government was taking the rise of the far-right, anti-Semitic Golden Dawn party very seriously, and emphasized that European leaders had an obligation to ensure that “nothing even remotely like” the Holocaust would ever happen again.

The threat of French anti-Semitism was rammed home just the day before, when an anti-government march in Paris degenerated into a shocking display of hate, as large portions of the 17,000-strong crowd chanted virulently anti-Semitic slogans including “Jews out of France!” and “Jews, France is not for you!”

France’s Jewish community – the third largest in the world (after Israel and the US) – is seeing an unprecedented exodus, and the continuing tide of anti-Semitism has triggered preparations in Israel for a major influx of olim (immigrants to Israel) from the country.

A recent poll by the EU’s Fundamental Rights Agency recorded that 40% of French Jews fear publicly identifying as Jews, and that 75% of European Jews feel that anti-Semitism is on the rise.