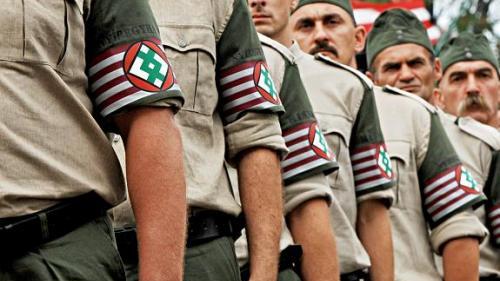 Hungary’s antisemitic Jobbik party will be “trampling on the graves of Holocaust victims” by holding a rally at a former synagogue on Friday, a leading Jewish organisation says.

The rally in Esztergom, a city north of Budapest where the Jewish population was wiped out during the Holocaust, is part of Jobbik’s campaign ahead of national elections in April.

Hungary’s most prominent Jewish group, Mazsihisz, vowed to “physically hinder” and use “any tools to protest against the rally” if it is not banned.

The organisation sent a letter to Esztergom’s mayor stating their objections but have not received a reply.

European Jewish Congress President Dr Moshe Kantor said: “While the Nazis physically destroyed this community, its ideological descendants in Jobbik are destroying it once more with their intended rally. This rally will be literally and figuratively trampling on the graves of Holocaust victims.”

Dr Kantor called on the Hungarian government and local authorities to stop the rally at the former synagogue, which is now a community centre operated by the municipality.

The government said it would not comment on rallies held by political parties, adding that the local authority was responsible for the venue.

“Official parties have the right to hold rallies at venues where the owners of the venue allow them to,” a government statement said. “In this case, the community centre in Esztergom is owned by the municipality.”

Esztergom mayor Éva Tétényi, who is an independent, did not respond to a request for comment.

Meanwhile, the government is facing mounting criticism over its yearlong programme to mark the 70th Holocaust anniversary.

Mazsihisz announced on Sunday it would boycott the Holocaust Memorial Year programme if the government did not, among other things, stop plans for a monument commemorating the Second World War German occupation. Mazsihisz, whose position was endorsed by the Wiesenthal Centre, said the monument fails to acknowledge Hungary’s role in the Holocaust.

A Jewish cultural organisation and two Budapest synagogues also said they would not participate in the Holocaust Memorial Year programme.

Mr Braham’s most recent work, The Geographical Encyclopaedia of the Holocaust in Hungary, won him the American Jewish Book Award in the Holocaust category, to be presented on March 5 in New York.