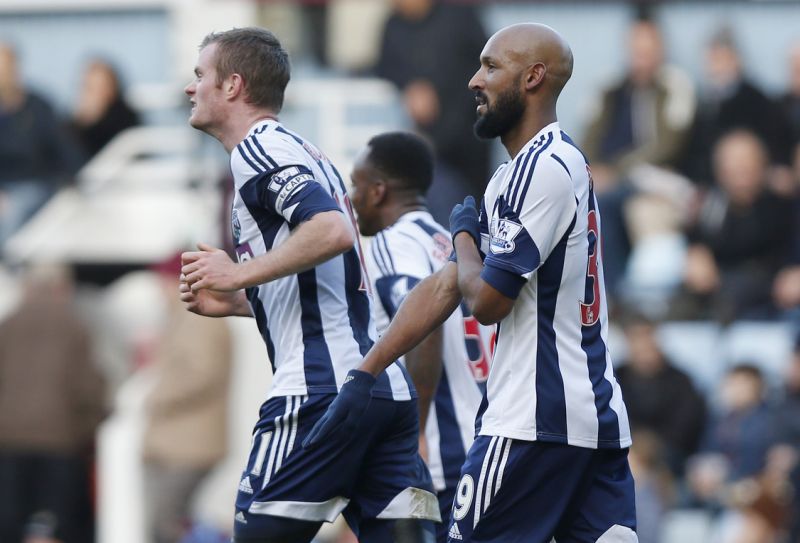 Nicolas Anelka was banned for five games by the English Football Association on Thursday and immediately suspended by West Bromwich Albion for a racially aggravated goal celebration.

The French striker performed the gesture, which is known in his homeland as a “quenelle” and has been described as an “inverted Nazi salute,” during a Premier League match in December.

Although an FA disciplinary panel backed Anelka’s insistence that he was not being intentionally anti-Semitic, performing the gesture was still found to be racist and abusive.

Anelka, who appeared at the hearing this week, received the minimum five-game ban for racism offenses, was fined $133,000 and ordered to complete an education course. Anelka can appeal, and he must decide within seven days of receiving the panel’s written reasons.

But West Brom responded to the verdict by suspending him while the central England club conducts an internal investigation and awaits the conclusion of the FA process.

“The club acknowledges that the FA panel ‘did not find that Nicolas Anelka is an anti-Semite or that he intended to express or promote anti-Semitism by his use of the quenelle,’” West Brom said in a statement. “However, the club cannot ignore the offence that his actions have caused, particularly to the Jewish community, nor the potential damage to the club’s reputation.”

The panel found Anelka guilty of two charges – that the gesture “was abusive and/or indecent and/or insulting and/or improper,” and it was racially offensive.

“The misconduct was an ‘aggravated breach’ … in that it included a reference to ethnic origin and/or race and/or religion or belief,” the FA verdict said.

Anelka’s legal team said he was “pleased” to be cleared of anti-Semitism.

“He is now waiting to receive the commission’s full reasons for their decision before considering whether or not to appeal,” the statement said.

Anelka performed the quenelle as he celebrated scoring in West Brom’s 3-3 draw with West Ham on Dec. 28. The gesture involves pointing one straightened arm downward while touching the shoulder with the opposite hand. It was popularized by French comedian Dieudonne M’Bala M’Bala, who has been convicted multiple times for inciting racial hatred or anti-Semitism.

“We acknowledge Anelka’s denial of anti-Semitic intent, but his action was clear and the FA’s zero tolerance approach to racism meant there could be no other outcome,” CST chief executive David Delew said. “This verdict sends a strong message to Jewish players and supporters at all levels of the game that the FA will act against anti-Semitic acts if they are reported.”

The European Jewish Congress expressed concern that Anelka was yet to express any regret over the case.

“Even if the FA is not convinced that the player’s intent at the time was anti-Semitic, he surely knows now the origins of the quenelle and the hurt and pain it caused the Jewish community, yet we are still waiting for an apology,” EJC President Dr Moshe Kantor said. “Anelka’s silence speaks volumes.”

The organization hopes the FA will use the case to help clamp down on abuse against Jews.

“Anti-Semitism remains the fastest growing hate in football, on the field and in the stadiums, and we hope that this episode will be used positively to once and for all stamp out hatred for Jews in football,” Kantor said.