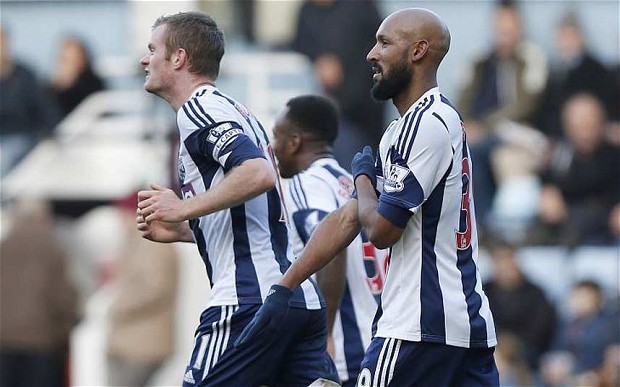 The British Football Association (FA) charged the former Paris Saint-Germain forward with ‘aggravated misconduct’ after hee the gesture, which is considered as an inverted Nazi salute in December alleged anti-Semitic gesture in December after scoring against West Ham United.

Anelka has said the gesture was not racist, but instead a tribute to his controversial friend, French comedian Dieudonne M’Bala M’Bala who invented the quenelle gesture.

The FA said in a statement: “An Independent Regulatory Commission has found an aggravated breach of FA Rule E3 against Nicolas Anelka proven and has issued a five-match suspension and a fine of 80,000 pounds, pending appeal.”

The FA commission concluded that Anelka was guilty of an ‘aggravated breach’ of FA Rule E3(2) that includes ‘a reference to ethnic origin and/or race and/or religion or belief’, but the three-man panel ‘’did not find that Anelka is an anti-Semite or that he intended to express or promote anti-Semitism by his use of the quenelle’’.

West Bromwich Albion said in a statement: ‘The club treats very seriously any allegation which includes any reference to ethnic origin and/or race and/or religion and/or belief. Upon both charges being proven, the club has suspended Nicolas Anelka pending the conclusion of the FA’s disciplinary process and the club’s own internal investigation.

It added, ‘The club cannot ignore the offence that his actions have caused, particularly to the Jewish community, nor the potential damage to the club’s reputation.’’

A statement from Anelka’s lawyers said: ‘Nicolas Anelka is pleased that the FA commission has found him not to be an anti-Semite and that he did not intend to express or promote anti-Semitism by his use of the quenelle gesture. He is now waiting to receive the full reasons for the decision before considering whether or not to appeal.’’

But European Jewish Congress (EJC) President, Moshe Kantor, who applauded the Football Association’s message that ‘’hate is unacceptable,’’ said ‘’we remain concerned that Anelka himself has never apologised for his actions. Even if the FA is not convinced that the player’s intent at the time was anti-Semitic, he surely knows now the origins of the Quenelle and the hurt and pain it caused the Jewish community, yet we are still waiting for an apology. Anelka’s silence speaks volumes.”

Vivian Wineman, President of the Board of Deputies of British Jews, welcomed the decision.

‘This supports the FA’s decision to invoke its own regulations after its report concluded that Mr Anelka’s gesture had anti-Semitic connotations and is highly offensive to Jews and right-minded members of the public,‘’he said.